Small & Midcap Mantra: Why you should not give the stock that rose over 50% in 3 months, a miss

Caplin Point with a strong presence in Central America, is on track to surpass its 52-week high of Rs 694.40 and reach closer to Rs 780 in the coming months, an upside of 16% from current levels

Caplin Point Laboratories Ltd stock price has rallied more than 50 percent in the last three months compared to a nearly seven percent rally in the Nifty during the same period.

On a year-to-date basis, Caplin has outperformed the benchmark index, up more than 32 percent compared to over 12 percent rally in the Nifty and 17 percent gains seen in the BSE 500 index.

Caplin Point Ltd, with a market-capitalisation of more than Rs 500 crore, is on track to surpass its 52-week high of Rs 694.40 and reach closer to Rs 780 in the coming months, an upside of 16 percent from current levels.

Established in 1990 by first-generation entrepreneur CC Paarthipan, Caplin has established a strong as well as a deep presence in semi-regulated markets of Central America (CA) such as Guatemala, El Salvador, Nicaragua, Ecuador, and Honduras among others.

It is also one of the leading formulation suppliers in these regions.

Pharma stocks are regaining upward momentum after a couple of weeks' breather, but stock-specific performance is likely to continue even though there is some consolidation in benchmark indices.

“Within midcap pharma pack we expect Caplin Point Laboratories to relatively outperform, as it entirely retraced its past seven months decline in just three months. The faster pace of retracement indicates structural improvement that augurs well for the next leg of up move,” Dharmesh Shah, Head – Technical, ICICI direct said. 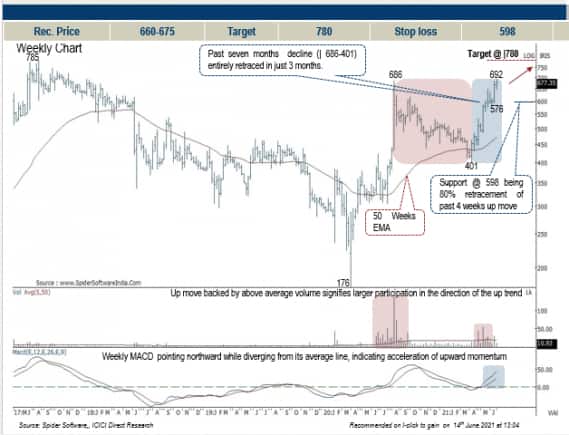 The key point to highlight is that on multiple occasions 50 weeks EMA (exponential moving average) has acted as a strong support. Even in the current scenario, strong buying demand emerged from the 50 weeks EMA backed by rising volumes.