The crucial support for the index is placed at 15450-15500 levels, and as long as Nifty50 trades above this level, bulls have a chance of regaining lost glory, say experts 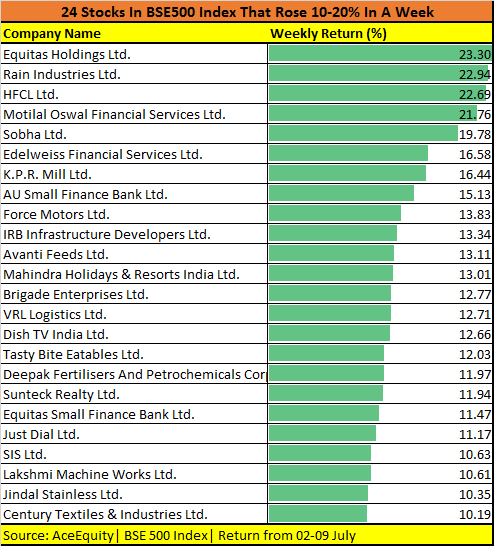 Experts are of the view that whenever benchmark indices consolidate, the smart money starts moving towards the small & midcap space. But, investors should approach this space with caution, they warned.

“Generally, when the benchmark consolidates in a strong uptrend the buying gets diverted to the mid and smallcap stocks and that is what has happened during the week,” Mehul Kothari, AVP – Technical Research at AnandRathi said.

“However, we reiterate our view that the index Nifty500 is stuck at the larger degree trend line resistance at the 13700 mark. This resistance coincides with the 200% retracement of its previous move,” he said.

Kothari further added that the index is consolidating near this price band for the last five weeks and he doesn’t expect any major fireworks unless this resistance is breached.

US Federal Reserve minutes, rise in COVID cases across the globe, sell-off from foreign investors, as well as results from the IT major TCS back home, weighed on D-Street sentiment in the week gone by.

“Domestic bourses remained afloat in a state of uncertainty as international bourses showed signs of profit booking on overvaluation. FIIs got rid of Indian equities in the latter half of the week giving the market a volatile experience,” Nirali Shah, Head of Equity Research, Samco Securities said.

Currently, it appears that the aggression in volumes have softened and the VIX is also more or less in the same range. “Only if Asia and other developed equities witness a pivotal correction in the coming week, then Indian markets make an intermediate top. Until then, we can safely conclude that this week’s move was on the back of profit booking only,” she added.

Nifty50 closed below its crucial support placed at 15800-15700 levels for the week ended July 9. The crucial support for the index is placed at 15450-15500 levels, and as long as Nifty50 trades above this level, bulls have a chance of regaining lost glory.

Among sectors, despite weak market conditions, strong buying was seen in reality and metal stocks whereas profit booking was witnessed in auto, PSU banks and selective IT stocks.

“Technically, on daily and weekly charts, the index has formed double top formation, and the texture of the pattern suggests short-term weakness likely to continue in the near future,” Shrikant Chouhan, Executive Vice President, Equity Technical Research at Kotak Securities said.

A double top is a bearish formation that suggests that the price of the underlying which could be a stock or an index has reached closer to the highest price twice but met with moderate declines henceforth.

“On intraday charts, once again the index held 15635 on the Nifty, and 52250 on Sensex as immediate support and reversed sharply which indicates a strong possibility of a quick pullback rally from current levels,” suggests Chouhan.