Sensex, Nifty have fallen over 6% since last Dussehra, first time in 12 years

Despite the headwinds, the Indian market will continue to outperform global peers as the country has shown consistent improvement in macroeconomic data, analysts say

An unfriendly interest rate scenario amid higher inflation is expected to crimp growth globally, however, the Indian stock market is unlikely to face any great challenges and will continue to outperform, analysts expect.

India’s benchmarks Sensex and Nifty are down over 6 percent each from Dussehra last year to date. This is the first time since 2011 that both equity indices have posted such losses. This year, Dusshera will be celebrated on October 5. 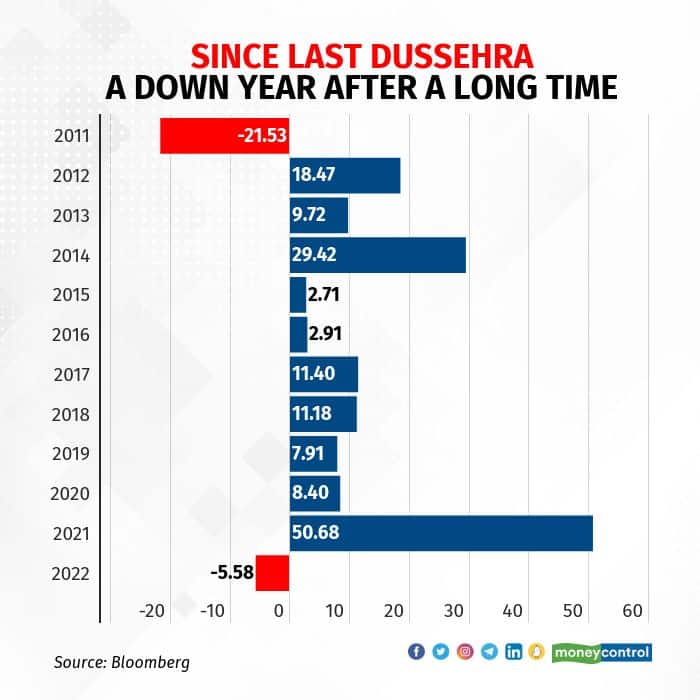 The fall in the markets was due to weak global cues, the depreciating rupee and sharp selling by foreign institutional investors (FIIs), triggered by the US Federal Reserve’s liquidity squeezing policy.

Globally, too, equity markets have sustained deep losses this year on a hawkish Fed trying to tame rising prices. Moreover, the Russia-Ukraine conflict has created supply chain issues that have contributed to elevated inflation.

The Reserve Bank of India (RBI) also raised its policy rate by 50 basis points for the third time to rein in inflation. With this, many brokerages and rating agencies have reduced India’s growth target. In the recent policy, RBI cut India’s GDP growth projection to 7 percent from 7.2 percent earlier.

Despite these headwinds, Indian markets, analysts believe, will continue to outperform global peers as the country has shown consistent improvement in macroeconomic data.

Healthy goods and services tax (GST) collections, better-than-expected auto sales numbers, a surge in credit growth and an above-normal monsoon all help make India more attractive than other emerging economies. This, along with continued buying by foreign investors and falling crude and commodity prices, has improved sentiment.

According to Mitul Shah, analyst at Reliance Securities, the Nifty target for FY23 is at 19,000 points at 20 times estimated FY24 earnings.

“We expect a strong economic rebound, normalised commodity prices, inflation within the targeted range and better visibility in the second half of FY23, which would transform Nifty valuations to close to the historical average. We expect FII inflows to continue and equities would continue with the outperformance with double-digit returns. We prefer sectors like automobiles, capital goods and consumer, which are likely to be in focus going ahead,” Shah said.

Between the last Dussehra and now, the BSE Power, BSE Capital Goods, BSE Auto and BSE FMCG indices are the only gainers, having risen between 5 and 15 percent, while other sectoral indices are in the red.

The BSE Realty and IT indices were the top losers, down 21 percent each, followed by BSE Metal and Healthcare, which lost 15 percent and 11 percent respectively. Other indices like BSE Energy, Oil & Gas, Consumer Discretionary, Consumer Durables and Bankex declined 1-8 percent. The BSE MidCap and SmallCap fell 7 percent and 4.3 percent, respectively, in this period.

Going forward, the markets should take a cue from the developments on these fronts and any new emerging triggers, analysts say.