The Bank Nifty has formed inside bar candlestick pattern on the weekly time frame, indicating directionless move and an intense fight between bulls and bears

The Nifty traded lower throughout the last week but managed to close above the crucial psychological levels of 11,000 on the back of strong short covering. The index formed a hammer candlestick pattern on the last trading session, indicating strong buying on lower levels. A doji pattern on the monthly timeframe, with long lower shadow, indicated positive momentum above August’s high placed at 11,181 mark.

Also, last week 5-day moving average (DMA) and 20 DMA crossovers have given a buy signal almost after two months of negative move. At the same time, the index has managed to close above its 5-week simple moving average (SMA) placed around 11,000 levels almost after 10 weeks of lower closing, which imply strength in the current up move.

Another bullish thesis is the breakout of recent emerging inverse head and shoulder pattern on the daily timeframe is expected above 11,150 marks, whereas target as per pattern comes near 11,480 levels. 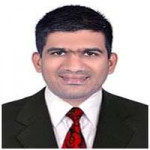 The Nifty has concluded its CD leg of bearish cipher harmonic pattern near its price reversal zone at around 10,782 levels.

Its future rollover data on the settlement of August expiry is 68%, which is less than last month’s rollover data of 73% and it is also lower than three-month average data of 74%.

Though the market is trading in a tight range from the last few days, strength in chart patterns on the time frame and oversold oscillators suggest the probability of relief rally towards 11,400 marks; whereas lower side support lies around 10,800-10,700 levels.

The Bank Nifty has formed inside bar pattern on the weekly time frame, indicating directionless move and an intense fight between bulls and bears; however, breakout of last week’s high placed around 28277 followed by strong volumes will make the trend bullish.

The scrip spurted from a low of 97, it showed pullback on upside and  marked the high of 106 and started consolidating there. This pullback rally and consolidation has taken the form of a double bottom pattern for the last few days. Currently, it is waiting for the breakout on upside, so that it can accelerate buying momentum. Emerging line of polarity on the daily time frame of chart suggest bullish momentum in the scrip. Indicator and oscillator also show conducive scenario in the coming sessions. So based on the mentioned technical structure, one can go long in the scrip around 99 for the target of 120 marks with stop loss of 83.

This stock was undergoing a consolidation for two years before it broke out of it in June this year. Since then the stock has been re-testing the boundary of the broken symmetrical triangle and should resume its uptrend. The MACD, too, indicates good momentum-trend follow through. We suggest buying POWERGRID around 196, with a stop loss of 185 for the targets of 220.

The counter appears to have formed a short term bottom near the lower base of double bottom on the weekly chart from where it attracts buying interest. Formation of a cup and handle pattern on the daily chart suggests strength. Buying momentum will accelerate above 440-445, where pattern breakout is expected. Sustainability above 200 DMA in coming sessions will imply further strength. Declining histogram of MACD also suggests upside momentum. Positional trader can create fresh long position around 425, with a stop below 399 on closing a basis for an initial target of 470.

This stock has given breakout of a symmetrical triangle above 1,520, and is showing relative outperformance in this market. The momentum oscillator RSI has moved above the 60 mark, indicating positive momentum in the stock. The MACD, too, indicates good momentum and trend follow through formation. We suggest buying DMART around 1,530, with a stop loss of 1,450 for the target of 1,650.

The stock has maintained its uptrend on the long term after bottoming out at 1,250 levels. Bullish crossover is seen in the scrip, as 20-DMA has crossed 100-DMA from downward side, which indicates upside move. At the current juncture, the stock has given breakout from a pole and flag pattern on the medium-term interval, which indicates more potential on the upside. Moreover, declining histogram of MACD in negative territory suggests buying in the scrip. We suggest buying Bata India at around 1,500 levels, with a stop loss of 1,435 for target of 1,600.

The author is Head of Technical & Derivative Research at Narnolia Financial Advisors.