As many as 29 companies in Jhunjhunwala’s portfolio released their shareholding data for the December quarter as of January 25. Of the 29 companies, only three have delivered positive returns in the last one year

Rakesh Jhunjhunwala, popularly known as the big bull of D-Street, increased his stake in 4 companies and cut holding in 8 companies in the December quarter as compared to September quarter.

Indian market registered flat return in 2018 with Nifty posting a marginal gain of about 3 percent, but the real carnage was seen in the broader market.

A similar picture could be seen in the portfolio of the big bull where 26 companies posted negative returns since January 2018.

As many as 29 companies in Jhunjhunwala’s portfolio released their shareholding data for the quarter ended December as of January 25. Of the 29 companies, only three have delivered positive returns in the last one year.

According to Forbes India, the ace investor is ranked 61 among billionaires in India with a net worth of USD 2.7 billion. 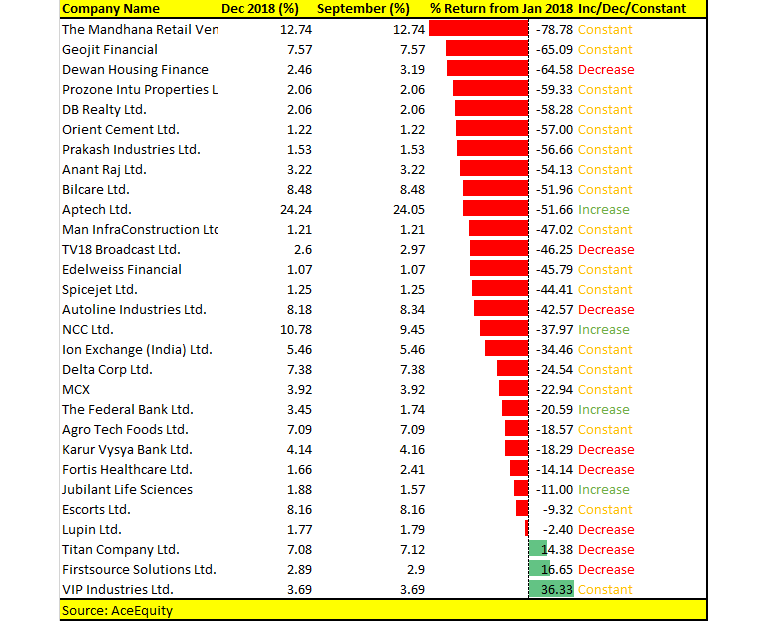 The housing finance company last week reported a 36.7 percent decline in its net profit to Rs 313.60 crore for the quarter ended December 2018. The Mumbai-based company had posted a net profit of Rs 495.44 crore in the third quarter of last fiscal.

As many as eight analysts have a buy rating on Titan, while 15 have an outperform rating, only 1 analyst has an underperform rating on the stocks, according to Reuters data.

Jhunjhunwala kept his stake constant in as many as 17 stocks which include The Mandhana Retail (down 78 percent in the last one year), followed by Geojit Financial Services, DB Realty, Orient Cement, Prakash Industries, Edelweiss Financial and MCX.