Promoters raise stake in over 60 companies in past 2 years; worth a look?

Making a buy or sell decision is the most crucial task in building your portfolio. One of the ways in which investors can make a buy or a sell decision is by analyzing what the promoter of the company is doing.

There are as many as 66 companies in which promoters have raised stake since 2018. These include Bajaj Auto, GMR Infra, IDFC First Bank, JSW Steel, Sun Pharma, Tata Steel, Tata Power, and Tata Chemicals.

However, the circumstances in which the stake was increased or decreased should be analyzed before making an investment decision, suggest experts.

“When promoters raise stakes in companies like Tata Power at such low levels it provides confidence to investors who are rattled with the steep fall witnessed in the stock price of Tata Power,” S Ranganathan, Head of Research at LKP Securities told Moneycontrol.

“Similarly, when SME companies like Sripipes witness promoter buying it tends to boost the confidence of investors. The buying seen in large groups like the Bajaj Group is also a pointer towards the confidence displayed by promoters in such times,” he said.

Ranganathan further added that other factors that an Investor should keep in mind while pressing the ‘buy’ button after looking at promoter buying include capital allocation policies in the business which many times do not capture in return ratios. 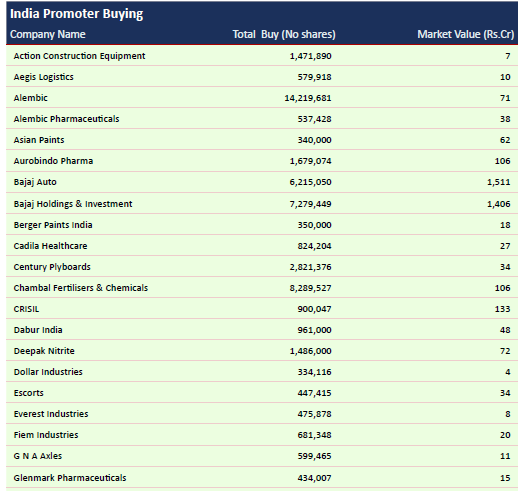 Not all companies in which promoters raised stake are strong fresh buys, suggest experts. If you already hold them in their portfolio then you could hold on to them. The promoters increasing stake in their respective companies is an encouraging sign for the investor as it showcases confidence from the promoter in its business. But, it should not be the only criteria, and investors should use other parameters such as valuations and industry-specific factors before pressing the buy button.

“Even though some of these companies are cyclical, we believe that with their strong fundamental track record, strong parentage, these companies would be able to wither the storm,” he said.

There are as many as 23 companies excluding PSUs in which promoters have reduced stake since 2018 that include names like ZEE Entertainment, Wipro, M&M, Lux Industries, Emami, Axis Bank, and Bajaj Consumer Care etc. among others. The promoter offloading its stake from his company is certainly not a good sign. However, there are various other reasons why promoters could have reduced the stake, and investors should not base their decision based on just one parameter.

“There is no golden rule that investors need to reduce their holding as soon as the promoters cut stake. Since it could be due to regulatory requirements, deleverage, to bring in new investors, to raise capital, etc. which may be positive for the stocks,” Vinod Nair, Head of Research at Geojit Financial Services told Moneycontrol.

“So better look for reasons like pledging, funding issue of promoters or group and weak outlook which is very negative for the stock,” he said.

Mishra of Religare Broking highlighted three scenarios under which promoters could raise the stake. In the first category, there are companies where promoter holding is greater than 75 percent thus they need to abide by the rules of bringing it to 75 percent levels and there is nothing to worry about.

“However, in the second category, the promoter is selling a stake in companies such as Emami, Jyothy labs, Zee Entertainment, Lux Industries, Liberty shoes as there are facing high debt issues and the promoters have pledged their shares,” said Mishra.

“And, lastly, there could be a case wherein the promoters are consistently reducing their stake. Investors should maintain extra caution with their existing investment in the companies which fall under category 2 and 3 and should try and reduce their investment as they tend to underperform the markets in the long run and also witness extreme volatility,” he explained.

Note: The tables are for reference only and not buy or sell ideas
Disclaimer: The views and investment tips expressed by experts on Moneycontrol.com are their own and not those of the website or its management. Moneycontrol.com advises users to check with certified experts before taking any investment decisions.