MC Interview | 'Nifty Auto heading towards 14,000, but IT index will consolidate before resuming uptrend'

Nifty Auto is up almost 8 percent this month and broke above the critical resistance zone 12,000-12,100 which was its previous peak in 2018 and is enjoying strong momentum.

The Nifty Auto index is likely to test 13,000 in the next few sessions but it is highly likely on a larger time frame that it is heading towards the 14,000-mark, Viraj Vyas of Ashika Group shares in an interview with Moneycontrol.

On the IT space, the technical and derivatives analyst at Ashika Group says the ongoing leadership in sectors like auto, FMCG and banking will give Nifty IT a breather as the index will look to consolidate time-wise before resuming its primary uptrend.

The rupee has slumped to hit 80 mark against the US dollar for the first time in Indian history. What's your view on the currency?

Having said that, the RBI has taken the first step by relaxing the rules to attract more FCNR (B) and NRE deposits. Rules have been eased in the rupee debt market to attract investments into the bond markets. It has also permitted the invoicing, payments and settlement of exports and imports in rupees which is also a landmark decision to conserve dollar spends.

With respect to charts, the pair appears overbought and some cool-off in price action is likely before it resumes its primary up-move towards 82-mark.

Considering the rally in auto space, do you expect the auto index to cross the 13,000 mark by the end of July?

Nifty Auto is up almost 8 percent this month and broke above the critical resistance zone 12,000-12,100 which was its previous peak in 2018 and is enjoying strong momentum. On stock front too, the sector is enjoying wide participation and usually in such scenarios (breakout), price tends to tend higher.

On a larger timeframe, the index is exhibiting a strength relative to Nifty50 (see chart below) and such outperformance is here to stay for the next few months. Hence, initially the index is likely to test 13,000 in the coming few sessions but it is highly likely on a larger time frame that the Auto Index is heading towards 14,000-mark. 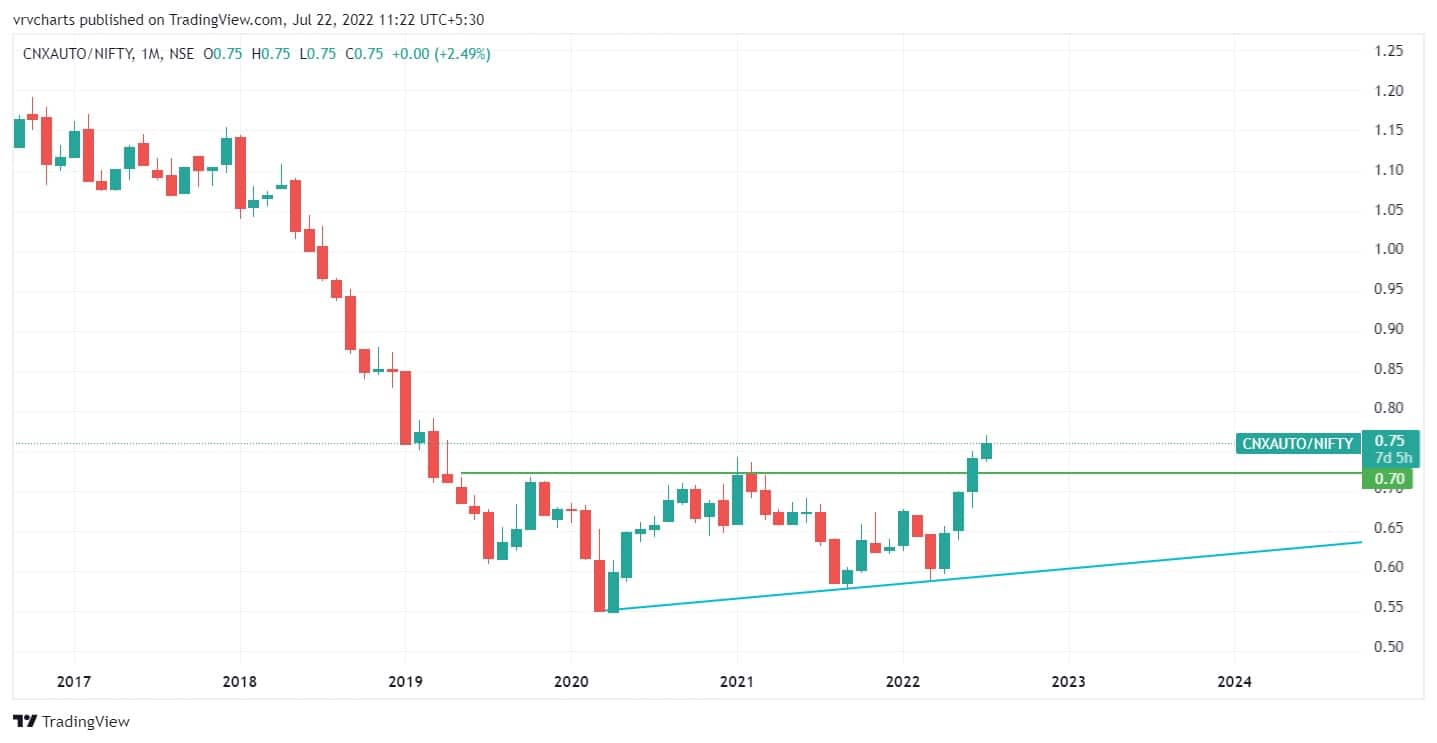 Do you think the IT index has seen a double bottom formation? Do you see further rise on the cards?

Nifty IT has enjoyed a brilliant run-up since the Covid lows and this year it did witness price correction. On a short-term chart, the price has exhibited positive momentum divergence (see chart below) so it is experiencing a pullback and attempting to form base at 26,000-level.

For it to show strength, IT index would have to demonstrate continued price intensity and sustain above 30,000-mark in the near term which seems like a low probability. 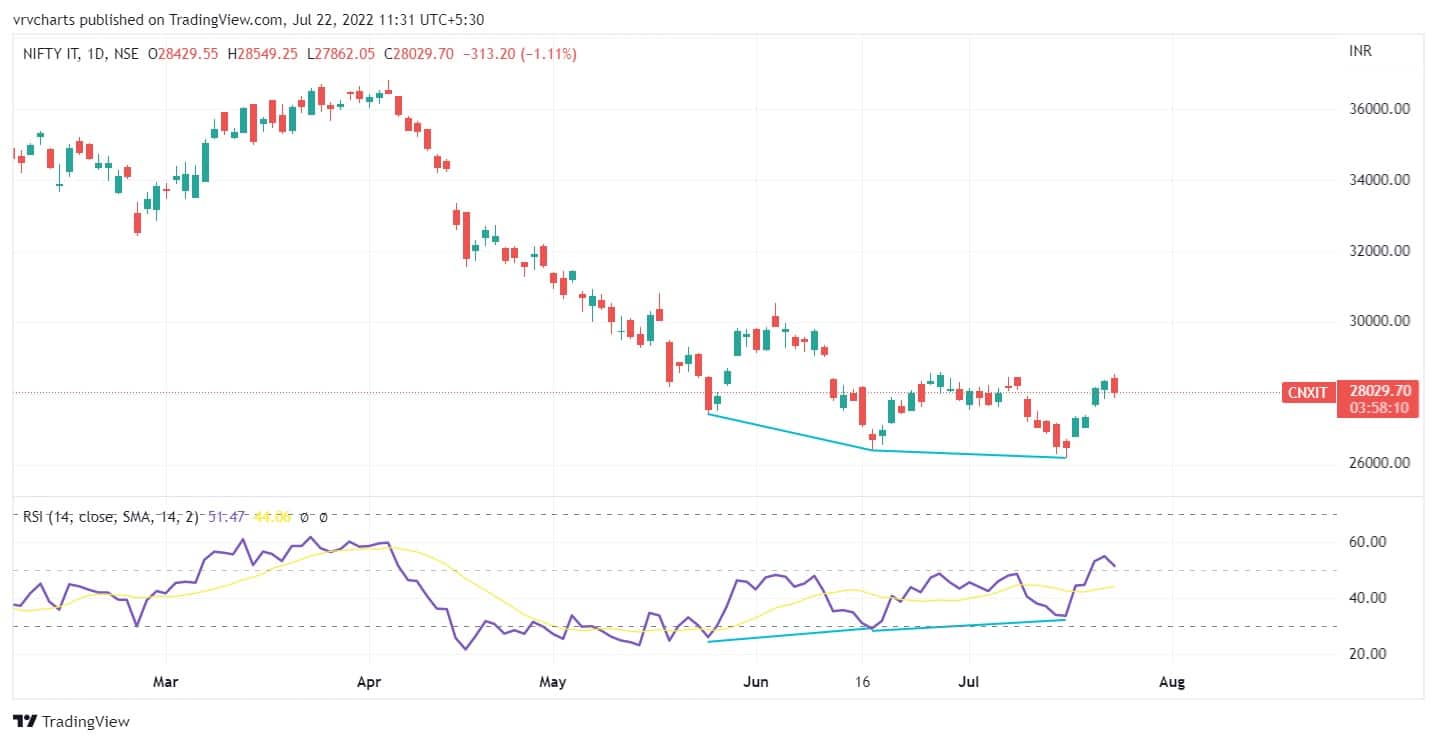 Other sectors like Auto, FMCG and Banking have taken leadership which will give Nifty IT a breather as the Index will look to consolidate time-wise before resuming its primary uptrend.

The market has showed nice recovery in last one month and hit 200 DEMA. Do you think the worst is over?

The Nifty50 is sustaining above the 200-DEMA (days exponential moving average around 16,500) which is a positive sign on short term timeframe as it also witnessed a positive momentum divergence towards the end of June.

The bigger rally has also come on the back of FIIs buying and short covering in F&O space. The index took 50 sessions to descend (18,000-15,200) and currently has spent 25 days retracting exactly 50 percent of this move.

Failing to move past 17,400-17,500 or spending more time below it will only intensify pressure and the index is likely to enter corrective mode once again. (see below chart) 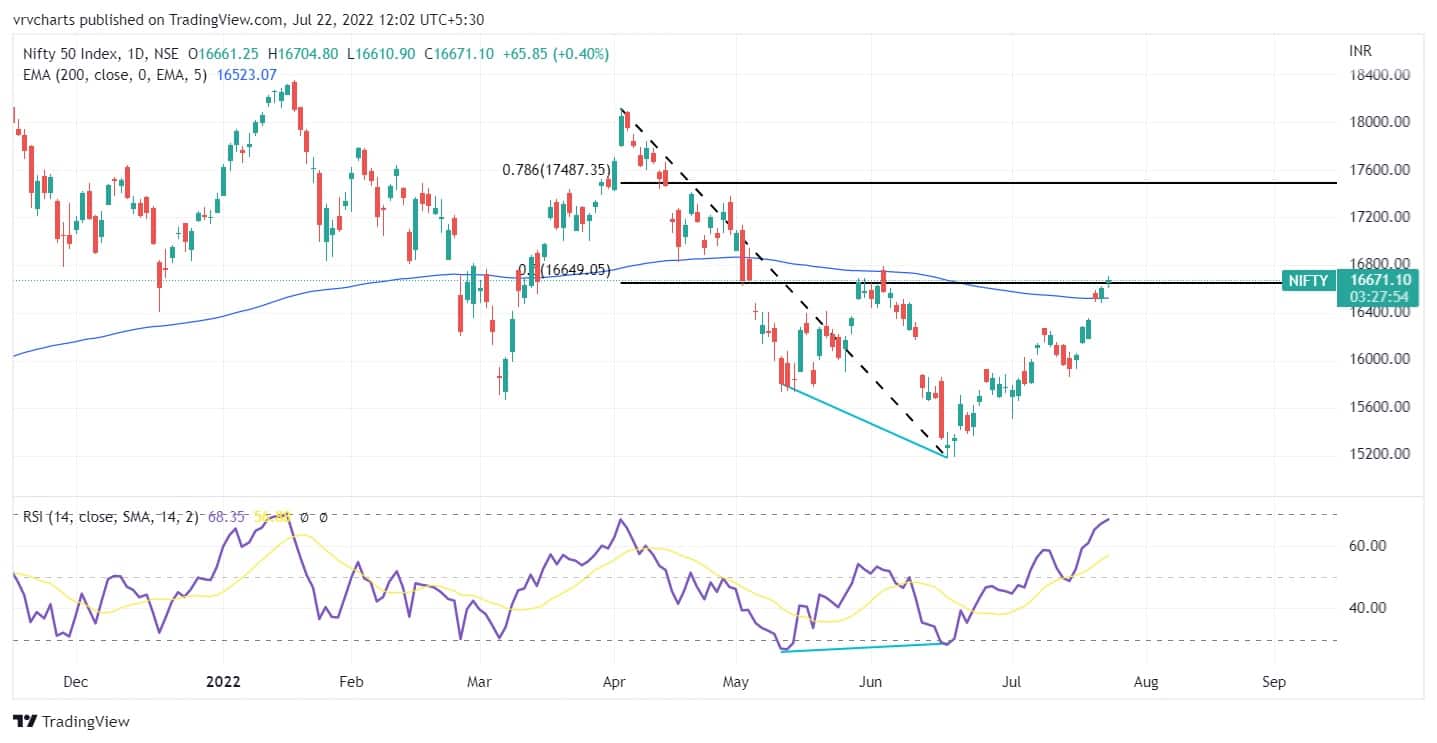 As a trader, should one focus only on charts and patterns, and ignore news noise?

As a trader or even an analyst the primary focus should always be on your methods, whether it is technical or fundamental. Regarding news, it creates sentiment and ignoring crowd psychology will not yield into success. So news can be a secondary evidence, but not the basis for forming opinion.

Do you expect rally in metal space in coming weeks as Fib retracement is still below 50 percent, which is generally a sign of bullish bias?

Yes, sustaining above 50 percent mark show bullish bias but given the run-up this sector enjoyed since April 2020, the index hardly witnessed any correction. So the current price correction might be over, but time-wise, the index will trade with sideways bias before heading higher. The 50 percent on a monthly chart is also an important support area (4,155 - peak of 2018)

What are strong sectoral ideas on the basis of charts and patterns, for positional traders with six months view?

Nifty Auto and Nifty FMCG are making new highs while the Nifty index is yet to test them so these sectors definitely show strength.

Disclaimer: The views and investment tips expressed by investment experts on Moneycontrol.com are their own and not those of the website or its management. Moneycontrol.com advises users to check with certified experts before taking any investment decisions.
Sunil Shankar Matkar
Tags: #MARKET OUTLOOK #Nifty #Sensex #Technicals
first published: Jul 25, 2022 07:42 am