Largecap makes a comeback! 9 Sensex stocks which hit record highs in July rose up to 17%

Largecaps playing catch-up after years of underperformance as the economy looks on strong footing.

The S&P BSE Sensex rose a little over 5 percent in July when index touched a record high of 32,672.66 led by a strong rally in bluechip names such as RIL, HDFC, Kotak Mahindra Bank, Maruti, HDFC Bank which also touched record highs last month.

Among the index names, as much as 9 stocks rose to fresh record highs in July which includes names like Power Grid, Adani Ports, HUL, and ITC.

Largecap stocks are playing catch-up after years of underperformance as the economy looks on strong footing, strong global as well as domestic flows, political stability, pro-growth reforms as well as attractive valuations.

“The Indian equity market witnessed a strong comeback towards the end of month backed by strong earnings report and favourable macro data. The major turn in the market comes from a large cap space where we witnessed a strong rally after a sluggish performance in past,” Dinesh Rohira, Founder & CEO, 5nance.com told Moneycontrol.

Rohira further added that a concern over an increased valuation in mid & small cap stock prompted investors to behold with bellwether stock which also contributed to price movement.

Leading from the front was Reliance Industries which gained momentum soon after announcing its results for the quarter ended June 30. The oil & gas major reported 28 percent YoY growth in net profit to Rs9,108 crore and recorded beat on most parameters.

Among the index companies, Infosys, HDFC Bank, ONGC, Maruti Suzuki were not far behind and made their presence felt last month.

In July, India caught up on its performance compared to its global indices. The MSCI India was up 7.4 percent, outperforming MSCI EM by 2ppt.

On a YoY basis, India continues to underperform MSCI EM and BRIC indices even as India is now outperforming the MSCI DM index.

Sensex's month on month performance was the best since Mar-16. Further, Sensex outperformed small and mid-cap indices during the month even as Sensex has underperformed the broader indices on YTD and YoY basis, Morgan Stanley said in a note.

Market breadth rose with 82% of the stocks trading above their 200DMA. The monthly derivative turnover rose to a new life high and monthly cash volumes rose to its second highest level in history (first being in June-09), it said. 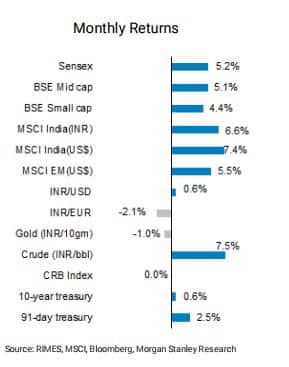 Largecap stocks have mostly underperformed small and midcap peers but July stood out as a strong month in which the tables reversed in favour of the big names.

However, the large part of the rally came from financials, especially from private sector banks, which rose in anticipation of a rate cut by the Reserve Bank of India (RBI) and strong June quarter results.

“We must understand that large cap outperformance has largely been anchored by financials which have higher weightage in the index. Moreover, as the earnings season progressed, most of the large cap have witnessed improved profitability and hence the positive reaction to stock prices,” Pankaj Pandey, Head-Research, ICICI Direct told Moneycontrol.

“At the current levels, on a broad base, while large caps offer valuations comfort, midcaps provide growth comfort. We note growth comfort continues to be preferred both domestically and globally,” he said.