Indian market hit a wall in March as fears over rising cases of coronavirus threatened to push the global economy into a recessionary phase. Relentless selling by foreign investors in March shaved off more than Rs 30 lakh crore of investor wealth in a single month.

This is probably one month that investors would like to strike off from the calendar. Many mutual fund investors saw their portfolios lose value every single day.

The S&P BSE Sensex and the Nifty50 fell about 23 percent each to post their worst fall since October 2008. Investors lost more than Rs 33 lakh crore in a single month as the average market capitalisation of BSE-listed companies fell from Rs 146.87 lakh cr on Feb 28 to Rs 113.48 recorded on March 31.

The large part of the fall was led by consistent selling by foreign investors who have pulled out more than Rs 60,000 crore from Indian equity markets from the cash segment so far in March, provisional data showed.

With 21 days of lockdown in India and a complete halt of economic activity across the globe due to rising cases of COVID-19 has fueled fears of economic recession, one of its worst seen in the last 150 years.

In an exclusive interview with CNBC-Tv18, former IMF chief economist Kenneth Rogoff said that “We are going to have a giant recession this year. The depth of the recession will be lot large at the high end of the 100 worst recessions the whole world has experienced in the last 150 years,” he said.

In tandem with the global markets, D-Street witnessed one of its worst month in the last 12 years. More than 90 percent of the Nifty50 stocks hit a fresh 52-week low or multi-year lows in the same period.

However, the bigger carnage was seen in individual stocks. As many as 43 stocks in the BSE500 index fell over 50 percent in the month of March. 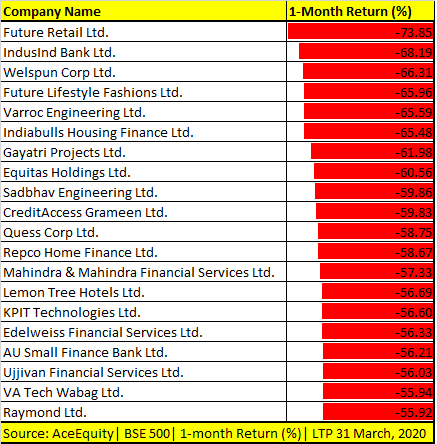 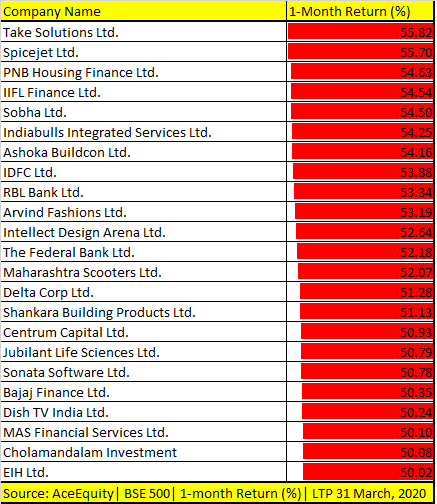 As many as 28 out of 30 index components in the S&P BSE Sensex gave negative returns in March. Out of 28 stocks, 15 of them fell 24-70 percent underperforming the index that fell 23 percent in March. 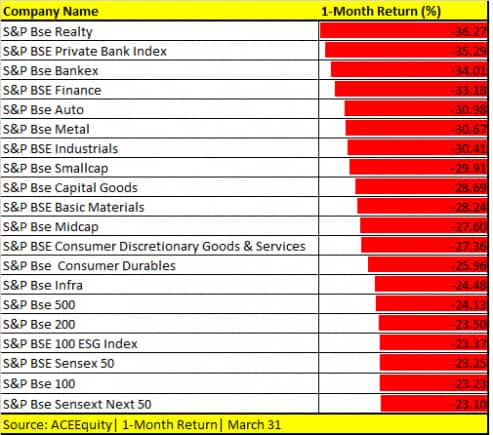 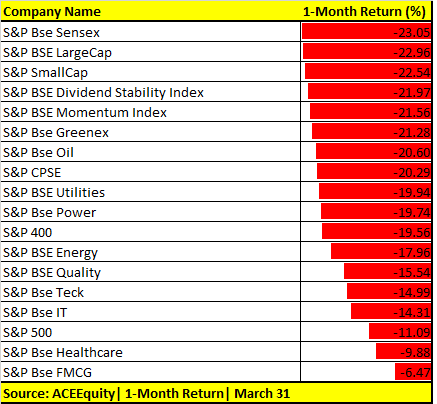 To battle the pandemic, the Indian government along with the Reserve Bank of India (RBI) have unleashed slew of measures to cushion the slowdown caused by the lockdown in the country for 21-Days, however, experts feel that more such measured could come in to support the economy.

“The Indian government is tackling the COVID-19 situation in a step-by-step manner. The government has already announced a 21-day lockdown in an attempt to stop the spread of the virus. They have announced relief measures worth Rs 1.7 lakh crore targeted to the low-income segment,” Mahesh Patil, CIO – Equity, Aditya Birla Sun Life AMC told Moneycontrol.

“Overall, these measures should give some confidence to investors that India should be able to contain the virus sooner rather than later. However, in comparison to other economies like US, Europe and China, where a very large stimulus of almost 8-10% of GDP has been announced, we need to do more,” he said.

The RBI also reduced rates by 75 bps, announced measures which will enhance liquidity in the system by 3.7 lakh crore, as well as a moratorium on loan and interest payments which should provide relief to a large swath of the population.

Well, it looks like markets have factored in the worst, going by experts. But, if cases related to Coronavirus escalate the Nifty could retest the recent swing low of 7,511 recorded on March 24.

In case we breach 7511 in April the possibility of further decline towards 7300, and 7000 looks likely, but the current scenario is a good opportunity for long term investors to build a portfolio.

“The data suggests that we are in a recession for CY2020 and the stock prices has factored that. This stock market trend will continue to be challenging if the risk of recession is expanding even post lockdown,” Vinod Nair, Head of Research at Geojit Financial Services told Moneycontrol.

“If the lockdown of 21days in India becomes successful and the domestic market opens then the second part of April will be promising. At the same time recovery from global lockdown will be encouraging,” he said.

Sameer Paul, MD & CEO, Trustplutus suggests that investors should stick to large-cap stocks which are most liquid since there is a real risk that many mid and small-cap companies could become illiquid in the coming months. Liquidity at the bottom of the markets is always at a premium.

"Currently there is a bottom at a place at around 7,500 on the Nifty. At 7,500 selling abated and there was some buying witnessed across the board. However, markets have the tendency to retest the previous lows which investors should be careful about," he said.