In five charts: Is agricultural sector under stress?

Wage growth is below average, fertiliser sales have fallen and rural consumption is showing weakness

With monsoons delayed in June and uneven in July, the hope is that August showers will make up for the shortfall. Meanwhile, the sector most dependent on the rains is showing signs of stress.

Also read: SBI report says agri income has shot up, then why is rural wage growth so poor?

Fertiliser sales have declined 21% y-o-y, agri-wage growth is below average and reservoir levels are at multi-year lows, according to a recent report (released on July 31) from BofA. The report said, “agricultural indicators weakened due to global headwinds and lower than expected monsoon in key states”. The graph below shows that the negative signals in June 2022 are overwhelming. If we look at the same months over the previous two years, we can see a mix of positive, neutral and negative signals in June 2021 and a similar picture in June 2020. A closer look will show that the strain had begun to show in April this year, if you compare it with the sentiment in April 2021. Last year, there was some positive sentiment in April, but this year there was only negative and neutral sentiment. 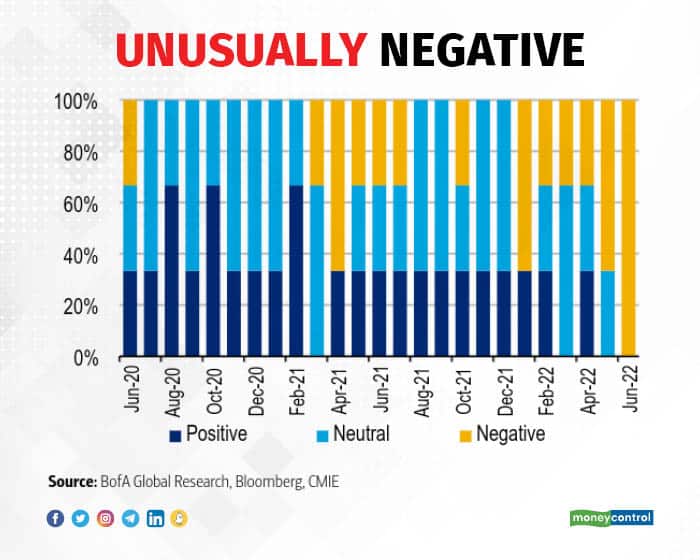 Rural demand can be hit if the monsoon isn’t just right. According to Nomura, “if monsoons last longer than usual or geographic disparities persist, it could also have a detrimental impact on crop production, especially rice, jute and sugarcane. A scenario in which foodgrain production, especially for rice, eventually falters is a downside risk to agriculture GVA growth, with potential second-round effects to the economy through lower rural demand… This would also represent an upside risk for food inflation, although the relationship between monsoons and food inflation has been patchy in the past.” The Southern Oscillation Index, which tracks the El Nino-La Nina climate patterns, is sending out good news as of now. Going by it (see below) there is ample rain coming after July. There is “ample potential for rains and crop sowing to catch up in August”, according to the Nomura report. But, the upward trend in the index from the La Nina effect should not persist. Nomura report added, “excess rainfall, especially towards the end of the season (September) raises the risk of damaging crops, as was the case last year”. Sales of two wheelers and tractors usually are good indicators of rural demand and therefore health of the rural economy. Both have been showing weaker trends.