We believe, the Nifty will be rangebound between 18,200 and 17,600, said Vidnyan Sawant of GEPL Capital

Last week, the Nifty50 formed Bullish Harami candle pattern on the weekly charts and in the current week it is sustaining near its previous week high indicating positive bias for the index for the short to medium term.

On the daily charts, Nifty has been sustaining below its 20-Day SMA (simple moving average) for last few days which shows resistance at higher levels.

However, the momentum indicator RSI (relative strength index) sustaining near 50-levels on the daily charts indicates neutral sentiment for the short to medium term.

The stock had entered in a corrective phase after made a all-time High at Rs 5,900 mark and moved lower towards Rs 4,351, this coincides with multiple touch points level and 50 percent retracement level of Rs 2,676 to Rs 5,900. The stock have found strong support of CIP (Change in Polarity) near Rs 4,351 levels and bounced back sharply with the bullish formation of Higher Top Higher Bottom pattern and once again sustaining at 3 week high levels which shows strong positive undertone of the stock.

The momentum indicator like RSI is sustaining above 60 mark indicating strong positive momentum of the stock. As per price pattern, we feel that the stock prices gain momentum and move higher towards the Rs 5,420 levels and eventually towards Rs 5,900 (all-time high). 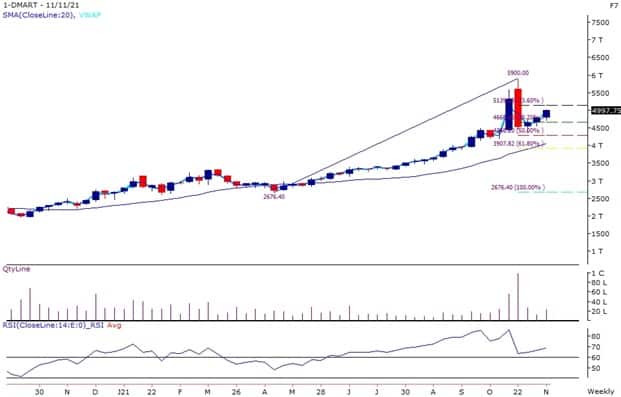 Currently the stock is resuming its primary uptrend after taking strong support at 50-day SMA (simple moving average) on the daily charts which shows strong positive sentiments of the stock for medium to long term.

The Stop loss for this trade set up would be Rs 2,450 levels of closing basis. KPIT Technologies has given a strong consolidation breakout with a volume confirmation which has been forming since last 3 months and made a fresh Life Time High which shows strong bullish undertone of the stock for medium to long term. The stock has been taking strong support at 20-week SMA since June 2020 indicating the stock is in long term bullish phase.

The momentum indicator RSI has sustained above 60 levels on all the time frames which confirms strong positive momentum of the stock for the medium to long term.

Looking at the prices action and the momentum indicators and other technical parameters we believe this stock has a lot of upside potential left.

The stop loss for this trade set up would be Rs 370 levels of closing basis.