Year-end 2021 | Calling 2021 a historical year would be an understatement. While the second wave of COVID wreaked havoc on the healthcare system, markets continued to rally and broke several records

Markets and major events in 2021

After an extremely rough 2020, the world pinned hopes on 2021, but as they say, be careful what you wish for, it only got worse.

From the deadly second wave of COVID-19 that decimated India’s healthcare system and laid bare its inadequacies for the world to see to the Republic Day and the Lakhimpur Kheri violence, Indians have not had it easy in 2021.

Yet, markets continued to soldier on.

Despite the volatility and a 9 percent fall from the all-time high, benchmark index Nifty50 is up more than 21 percent from the close last year, so far.

Read all our year-end 2021 stories here

Easy money policies by central banks, increase in retail participation, the promise of economic growth and mass vaccination against COVID have been some of the factors that drove the market rally.

Let’s check out the major events of 2021 and how the markets reacted, or did not react to them.

Covid pandemic continued to be the centre-stage

It was a happy new year for the market when the Centre approved Bharat Biotech’s Covaxin and Serum Institute-manufactured AstraZeneca’s Covishield vaccines on January 2 for emergency use. This was followed by a mass vaccination programme, initially only for healthcare workers, but progressed at an undesirable pace. Then the deadly second wave came in April, which battered the healthcare system until June. From thousands of deaths due to shortage of oxygen in hospitals to bodies floating on the banks of the Ganga, it was a grim situation that left no one untouched.

It was a choppy period for the market as well, and yet, the Nifty50 gained 5 percent during the two months of April and May.

Also read: Five dividend yields funds that gave 38-51% returns over the past one year

Things calmed down and experts believed we were entering a stage of “endemicity”, learning to live with the virus, and marking new vaccination milestones as India reached the one billion vaccination mark on October 21. However, the Omicron variant was detected in India in December, which brought uncertainty to the market.

In December, farmers ended the biggest protest that the Independent India has seen so far, 15 months after the three contentious farm laws were passed in the Parliament in September 2020.

Even though it has been called a victory for the farmers, it came at a cost. On January 26, thousands of protestors clashed with the police during a tractor parade. With some protestors climbing poles at a section of the Red Fort and some ransacking public property, the police resorted to teargas shelling and lathicharge. Also read: What is in store for Indian equities in 2022?

The movement also saw unconstitutional arrests of activists and supporters. While the Karnal incident in August became infamous because of an IAS officer, caught on camera, instructing policemen to beat up protesting farmers and not let anyone breach the security cordon without “a broken head”, the Lakhimpur Kheri incident in October left eight people dead and several injured.

However, the market did not pay heed to any of the developments, deeming them political even as some experts suggested it could hurt the FII sentiment as investors would see the rollback of the laws as a failure in implementing reforms.

A few months after the finance minister announced LIC’s initial public offer would be launched this financial year itself, the ministry laid out a plan to monetise assets worth Rs 6 trillion in the next four years. But the bigger news that buoyed sentiment was in October, when the government successfully found a “home” for the debt-laden national carrier Air India in Tata Sons. The group received a nod to acquire 100 percent stake in Air India, the airline it founded nearly 90 years ago, for Rs 18,000 crore. 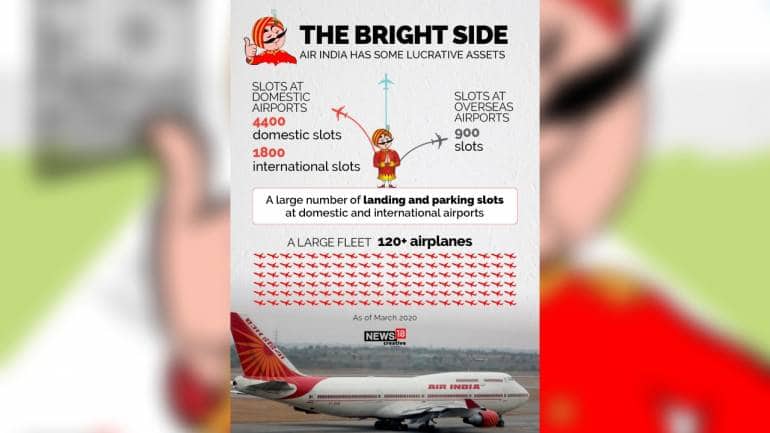 October also saw a severe shortage of coal, with several states facing power outages for hours every day. While politicians, central ministers and chief ministers started playing the blame game, no one took any responsibility to resolve the issue.

Reasons such as excessive rainfall, international price rise, COVID-19 pandemic, less production, transportation issues, including freight rates and high consumption, were cited as the reason for the coal shortage. In short, power generation took a hit and people suffered.

As we moved into November, the crisis eased as supplies of coal began to rise again after the governments pressed miners to rapidly boost output and lifted imports, allowing power plants and major industrial consumers to start rebuilding stockpiles.

The end of 2021 saw major central banks turning hawkish, and indicating that rate hikes were in the offing, which would put an end to the easy money era that markets were riding on for the past two years.

While the US Federal Reserve said it was doubling down on its stimulus taper, the Bank of England actually raised interest rates by 25 bps. Both the central banks cited rising cost of employment or tight labour market conditions for the change in stance.

Now, the market has been anticipating liquidity tightening for a while, which is why foreign investors have continuously been pulling out from emerging markets this year. Add to that Omicron concerns, and the market saw a bloodbath on December 20. Since April, FIIs have been net buyers only in September in the equity cash market.

Also read: Start-up Street: 2022 set to be another year of frenetic private equity

The year 2021 has been nothing less than historic. It not only saw massive FII selling, but domestic investors remained net buyers from March in the cash market.

Moreover, the market saw record systematic-investment-planning contribution this year, with Rs 11,005 crore in November alone, as per data from the Association of Mutual Funds in India. 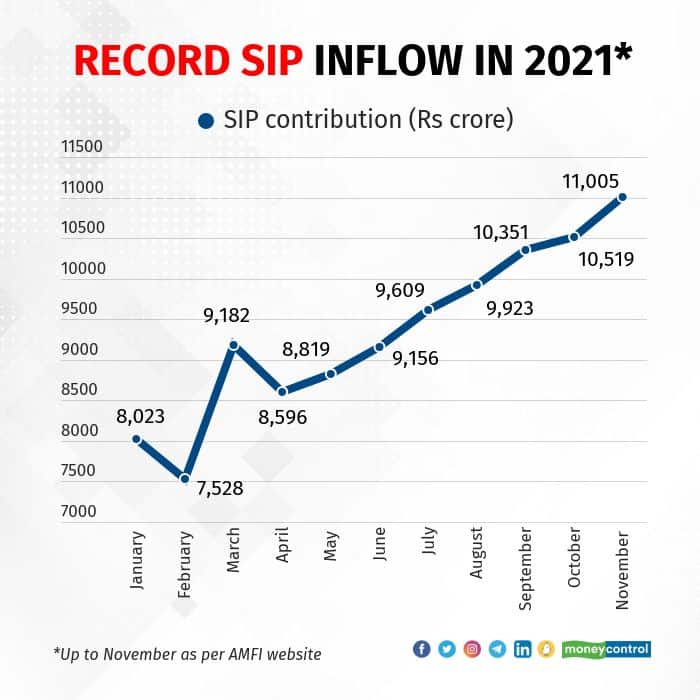 Banking on the market exuberance throughout the year, the primary market saw more than 65 companies launching their public offers. Companies have raised a record Rs 1,31,416 crore from the primary market in a year, according to data from Chittorgarh, which tracks IPOs.

The year also saw the largest IPO in One97 Communcations, the parent of digital payments giant Paytm, which raised Rs 18,300 crore.

Not just that, India’s foreign exchange reserves hit a record high of $642.43 billion in the week ended September 3, according to data from the Reserve Bank of India. This was after another week of record high, when the central bank reported forex reserves had hit $633.56 billion in August.

However, the reserves have since fallen, and were at $635.82 billion during the week ended December 10. 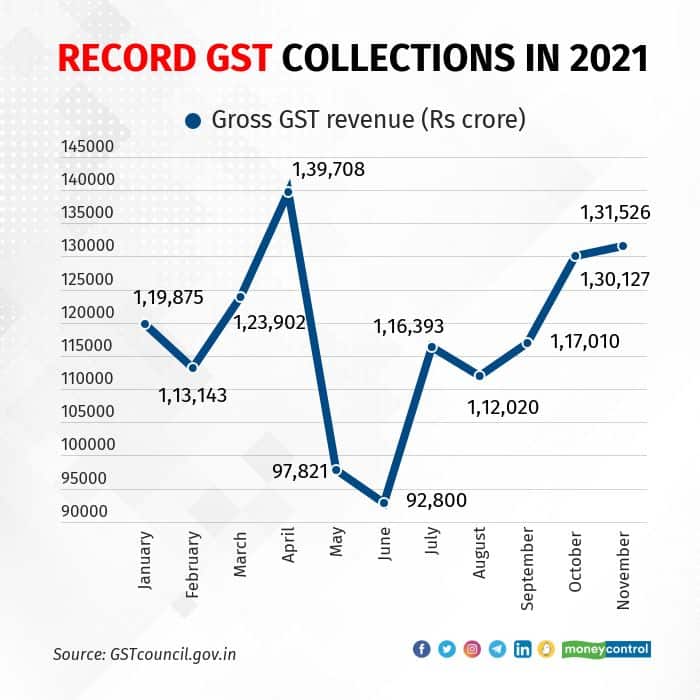 And in positive news for the government at a time when funds are stretched, we also saw record GST collections this year. In April, the government collected Rs 1,39,708 crore in GST revenues, the highest ever for any month. After the collections fell for the next few months, November saw the second highest collections since the implementation of GST, at Rs 1,31,526 crore.