The move is aimed at providing an opportunity for multiple players and mitigate systemic risks that could arise out of a few dominating the space.

The National Payments Corporation of India (NPCI), which operates digital payment rails such as UPI, IMPS, and BBPS, has shared details of how it plans to cap market share volumes of payment apps at 30 percent, a move aimed at providing an opportunity for multiple players and mitigate systemic risks that could arise out of a few dominating the space.

The volume cap for a Third-Party Application Provider or TPAP (payment apps like PhonePe, Google Pay, Amazon Pay etc) will be effective from January 1st, 2021. Existing TPAPs who exceed the volume cap as on 31st December 2020, will have a period of 2 years from the effective date to comply with the provisions. On the other hand, banks apps (Paytm, Axis etc) are exempted.

A Paytm spokesperson said, "NPCI has taken a welcome decision that would help in the healthy growth of the whole ecosystem. This guideline ensures that UPI will not be dependent on any single player. Paytm has been the largest digital payments platform processing over 1.2 billion monthly transactions providing all digital payments method including wallet, UPI, cards and banking services."

The last year has given a huge fillip to digital payments in India, with the UPI platform clocking over two billion transactions a month. UPI payments are currently dominated by Walmart-owned PhonePe, which has a market share of over 40 percent and Google Pay which has 37-38 percent. The other key players include Paytm, Amazon Pay and WhatsApp Pay, which launched a few months ago. These norms in effect mean that PhonePe and Google Pay will have to bring down their market share over the next two years to comply with the 30 percent cap, even if this means turning away new users. The guidelines from NPCI come months after it announced the move to cap volumes, in November 2020.

“The Volume Cap for a TPAP shall be effective from 01st January, 2021 and the approved logic to calculate the Total Volume of the TPAP shall be uniformly reported on the NPCI website. As a first step to achieve compliance, NPCI has started reporting UPI app’s value and volume on the NPCI website, which shall be further improved in accordance to the SOP in the due course. NPCI shall share the details on the TPAP volumes, the compliance to the SOP and actions taken with the Regulator,” the circular from NPCI said.

NPCI believes UPI payments have the potential to touch two billion transactions a day in the next three to five years as India sees a rising Internet adoption, thus necessitating multiple players and reducing systemic risk and payment failure.

It said the design principle used in the guidelines to control the volume cap is done in such a way that the current users are not impacted and the transactions will not decline to the extent possible. There will also be a provision to exempt the players to some extent when the volume cap is reached, so that it does not create sudden disruption in the market. Such exemptions will be for a limited time period of 6 months based on the request by the TPAP to their bank when they breach a threshold.

It has also set three filter limits to alert the payment apps-Level 1, when it touched 25-27 percent, Level 2, when the market share is at 27.1-30 percent and Level 3, when it crosses the 30 percent, at which point the payment must stop onboarding new users and give an undertaking on the same.  If the payment app does not comply, NPCI can levy a penalty or even block the new user on-boarding from its central UPI system.

The payment apps also need to communicate a message to new customers in case they are not able to on-board them: “Dear user, as per NPCI rules any UPI app with more than 30% market share cannot onboard new customers until their market share goes down. Currently, <App name's> UPI market share is <XYZ>% so unfortunately, you'll have to wait a while before you can access our UPI services. We apologize for the inconvenience and promise to notify you as  soon  as  NPCI  allows  us  to onboard you again” 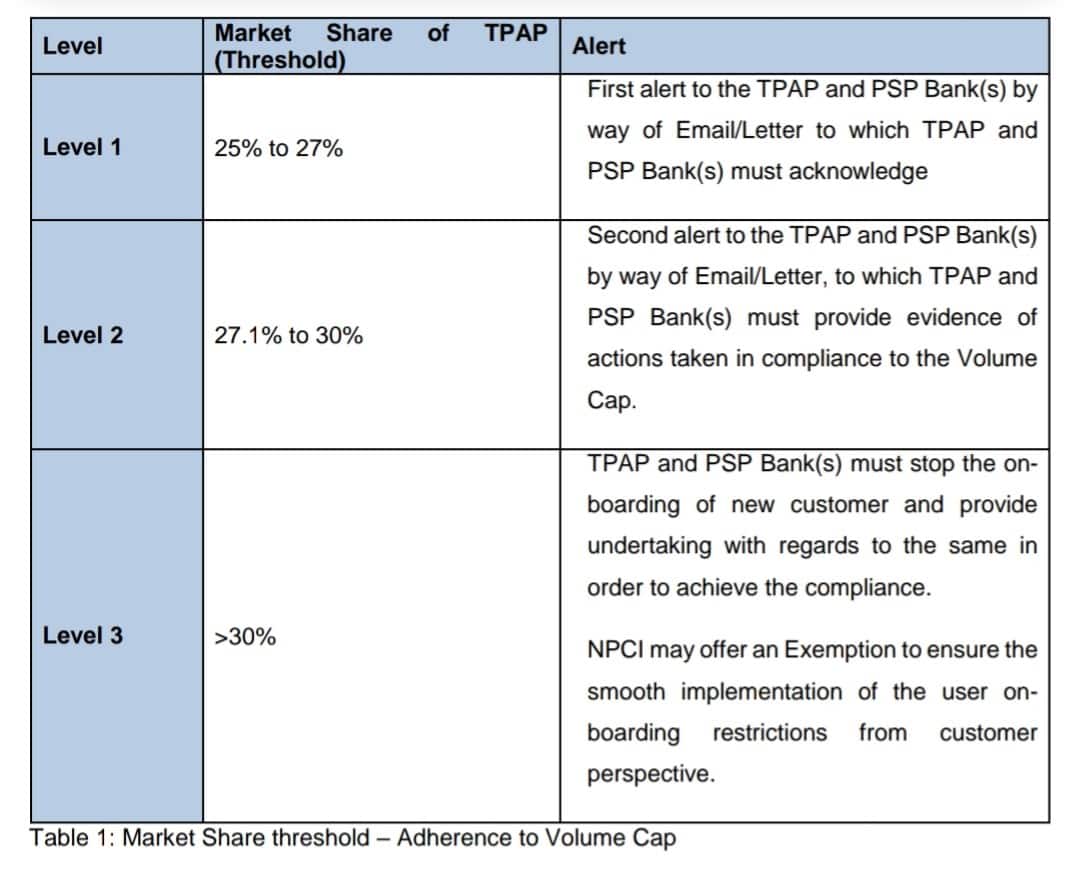