While casual gaming is the most popular genre in India, hardcore gaming is currently the fastest growing category in mobile gaming market and the growth is projected to outpace all other sub-segments.

India's mobile gaming market is set to more than triple in size to $6-7 billion by 2025, from $1.8 billion in 2021, according to a new report by the Internet and Mobile Association of India (IAMAI), RedSeer and OnePlus.

The report said the growth will be driven by a 500 million strong, digitally native population between the ages of 15 and 35. India has the world’s largest number of game downloads, estimated to be 825 million in August 2021, or 17.6 percent of total worldwide downloads, according to app intelligence firm Sensor Tower.

The government-imposed lockdown due to the Covid-19 pandemic further accelerated the growth of these games as mobile app downloads increased by 50 percent and consequently user engagement went up by 20 percent, the report said.

While casual gaming (Angry Birds, Ludo King) is the most popular genre in India, hardcore gaming (Krafton's Battlegrounds Mobile India and Garena's Free Fire) is currently the fastest-growing category in the mobile gaming market and the growth is projected to outpace all other sub-segments, as per the report.

These gamers are the most engaged cohort, often spending 4X more time and money on gaming, compared to the casual gamer, the report said. In a survey conducted over 500 hardcore gamers, around 70 percent of the respondents said they play 2-5 games in parallel and spend about Rs 230 per month on gaming. These gamers also spend time watching e-sports, which is already a $30 million market, it noted. 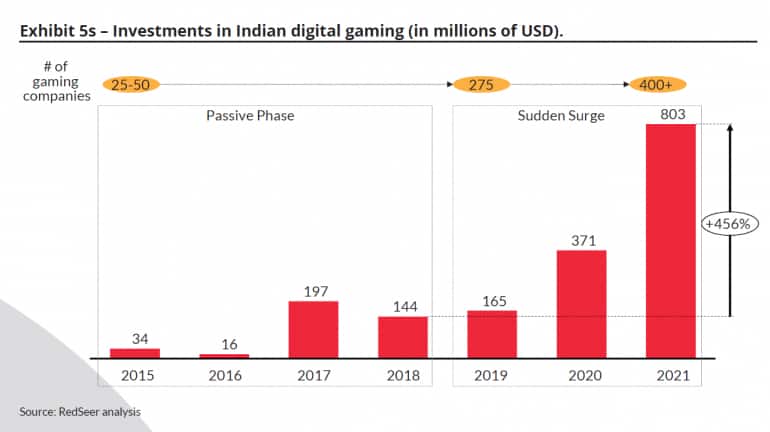 The sector needs a combination of policy, capability building and thought leadership to drive sustainable growth and India needs to focus on creating a favourable investment environment to nurture the gaming ecosystem, the report said.

It noted several direct initiatives such as STPI's Center of Excellence in Hyderabad to provide resources such as incubation, mentoring, technology support, and funding for Gaming, Animation, VFX, Computer Vision and AI startups and the Indian government's National Centre of Excellence for Animation, Visual Effects, Gaming and Comics as well as indirect initiatives such as Digital India and Digital Literacy policies.

However, there is regulatory uncertainty over some aspects of gaming and the laws defining skill, gambling, data protection and taxing gaming earnings are still under discussion. For instance, the Karnataka government notified an online gambling law on October 5 that outlawed all forms of online gaming where transfer of money is involved.
Moneycontrol News
Tags: #Casual Games #Hardcore Gaming #Mobile Games #mobile gaming
first published: Oct 6, 2021 02:41 pm