Illegal loan sharks return in the guise of digital lenders

Instant loan providers are thriving, luring gullible consumers looking for easy loans only to harass them later using recovery agents, pushing many to commit suicide. Moneycontrol tracked a few such cases. Here’s what we found

Offering easy money to gullible borrowers regardless of their creditworthiness, these loan sharks operate through recovery agents using arm-twisting tactics. Cases of suicides linked to such harassment are on the rise.

Koregaonkar had borrowed a sum of Rs 5,000 from one of the loan lending apps after he plunged into a financial crisis, according to a police source.

In order to coerce him into re-paying the outstanding amount, recovery agents landed at his doorstep and started arm-twisting tactics.

The agents even morphed his face onto nude photographs and sent  them to all his contacts, publicly harassing him.

In another recent case, M Rajkumar Yadav, a 22-year old driver at a car showroom, allegedly committed suicide by hanging at his Hyderabad home due to harassment by loan app agents.

Kumar had allegedly borrowed Rs 12,000 through one of the loan apps but managed to repay only 8,000.

The collection agents harassed him for the remaining Rs 4,000 and usurious interest.

Following a number of suicide cases in Hyderabad, Telangana’s cybercrime cell released a list of “fake” loan apps that lure borrowers by offering instant loan, according to top police sources in the Telangana cybercrime department.

These include UPA Loan, Mi Rupee, Rupee Loan and Hoo Cash, among others. Moneycontrol could not immediately contact these apps for a response. 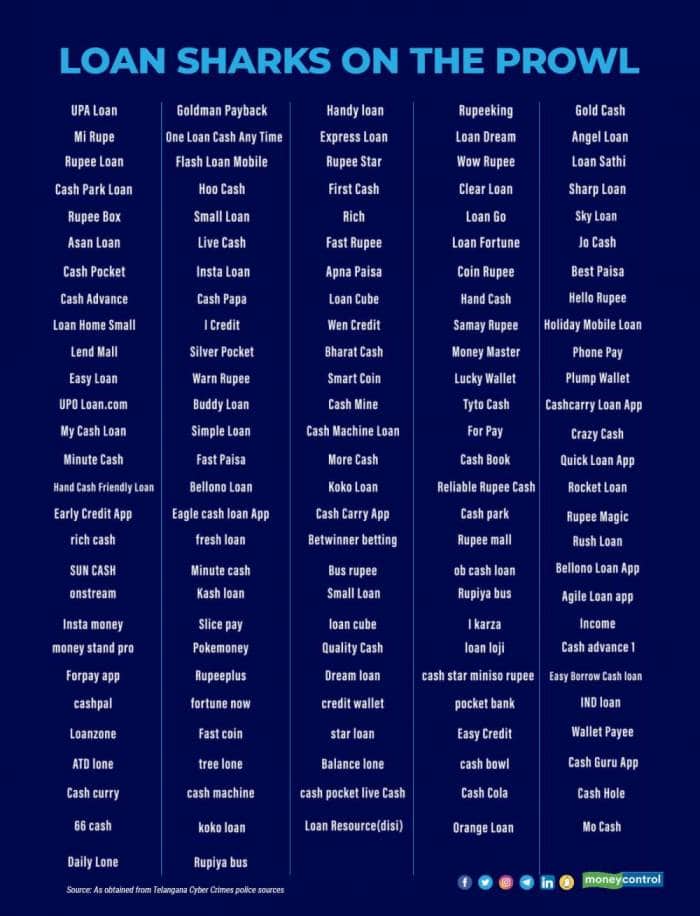 A Moneycontrol analysis showed that at least 20 suicides have been reported across the country in the last six months due to a debt trap laid by digital loan sharks and constant harassment by loan collection agents. Such incidents are often reported from Hyderabad.

According to the latest report by the National Crime Records Bureau, suicide by bankruptcy or indebtedness constituted 3.4 percent of the total reported cases in India in 2020.

According to industry experts, illegal instant loan apps have mushroomed, especially after the nationwide COVID lockdown, which left millions jobless and in dire need of funds.

According to the Centre for Monitoring Indian Economy (CMIE), at least 7 million Indians lost their jobs because of COVID-19.

A report of the Reserve Bank of India’s (RBI) Working Group on digital lending, released in November, identified 600 illegal lending apps operating in India last year. There were approximately 1,100 lending apps available for Indian Android users across more than 80 application stores from January 01, 2021 to February 28, 2021, it said.

“Sachet”, a portal established by the RBI against unregistered entities, has received approximately 2,562 complaints against digital lending apps between the start of January 2020 and the end of March 2021.

The lure of small, uncollateralised and short-duration loans became all the more appealing as banks and regulated entities were averse to lend money to defaulting borrowers. This credit gap in the system led to the proliferation of such loan apps in the system.

“The lower end of the economy is seeing turmoil in terms of job availability and other stable livelihood means; gig economy and blue-collared unskilled workers are especially suffering,” said Srinath Sridharan, independent director at the Fintech Association for Consumer Empowerment (FACE).

Most of the apps acquire their potential clients by advertising on other gaming apps and/or sending promotional text messages. These loan apps source money from unknown individuals and give hassle-free, quick loans to consumers at a high interest rate.

As the next step, these apps ask borrowers to provide access to his/her contacts and images and then sanction and release the loan amount in minutes, without any KYC or verification. Their funding source is high net-worth individuals or foreign entities.

“The tenure of these loans ranges from Rs 2,000 to as high as Rs 50,000 for a duration ranging anywhere from six days to 36 days,” said an industry official, requesting anonymity.

“The interest charged is exorbitant and ranges from 60 percent to 100 percent to earn hefty profits. Our estimate is that the size of the lending industry for these illegal loan apps is anywhere between Rs 1,500 crore and Rs 2,000 crore,” the official said.

Most regulated digital lenders typically charge a commission of 1-3 percent from banks that originate the loan, according to the industry official quoted above.

The interest rate charged to the borrower can range up to 25 percent for a tenure of three months to five years. In contrast, most loan apps that are not regulated by the RBI charge a monthly rate of as much as 60 percent for a duration of six days to 36 days.

The most lucrative aspect of these instant loan apps is the tenure of the loan, small quantum without collateral, and the fact that it does not require any CIBIL score.

A CIBIL score is an important metric that banks use in order to determine a borrower’s credit worthiness. It is a three-digit numeric summary of one’s credit history, rating and report, and ranges from 300 to 900.

The closer a borrower’s score is to 900, the better is the credit rating.

Unlike banks, illegal app-based lenders do not conduct any background checks and income verification, which suits needy borrowers. A borrower is expected to return the money in the stipulated time, with the interest component. If there is a default, the interest rate compounds per day.

In desperation to stop such harassment, victims prefer to roll over borrowings from one app to another, leading to a debt trap. This pattern was corroborated by three such victims Moneycontrol spoke to: Mumbai-based Rakesh Pardeshi and Bhoomi Sinhaa and Gurugram-based Vishal Diwan. 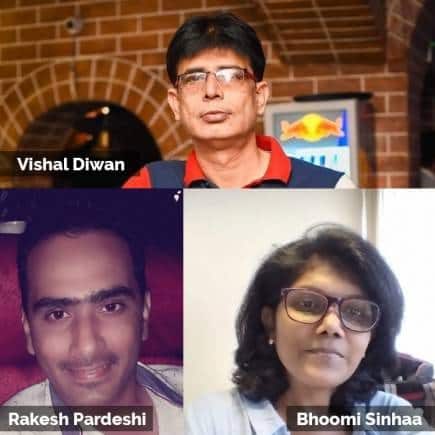 Two of the three victims started off by borrowing as little as Rs 25,000 from one app, and within one month, their total outstanding to 30-40 apps was as high as Rs 16 lakh.

“A lot of borrowers across the country do not get qualified by banks and NBFCs for lending, and hence, borrowers are turning to other sources of credit,” said Kunal Varma, co-founder and chief executive officer at Freo, a consumer-led neobank. “Certain loan apps mimic the traditional banking setup but offer loans instantly, without any KYC or verification.”

“This is where customers are caught in a vulnerable state, and the downhill momentum begins once they are in it. Interest rate rollovers are exorbitant and customers invariably get into debt traps; most of the time, borrowers are caught off guard,” Varma added.

Arguably, banking regulator Reserve Bank of India woke up to this problem very late. It set up a working group in January 2021 following a series of such cases to study the issue and suggest regulations.

In November 2021, the working group proposed stricter norms for digital lenders, including subjecting the Digital Lending Apps to a verification process by a nodal agency to be set up in consultation with stakeholders, and the setting up of a Self-Regulatory Organisation (SRO) covering the participants in the digital lending ecosystem.

The RBI is yet to finalise these guidelines. An email sent to the central bank on May 20 requesting a comment on the status of these proposed guidelines is yet to elicit a response.

This was after the RBI, in June 2020, asked banks and NBFCs to make sure they adhere to the fair practices code guidelines in letter and spirit while lending through digital platforms. This is irrespective of whether they lend through their own digital lending platform or through an outsourced lending platform. In December 2020, the RBI had also cautioned borrowers against unauthorised digital lending platforms and mobile apps.

“Till date, there are more than 200 apps on Google Playstore that are not registered with the RBI; what happens to those? There is no regulation on lending and the interest rate that is charged,” said Nikkhhil Jethwa, founder of the Loan Consumers Association.

“We think that the RBI must take note of this issue and acknowledge that there is a problem at large,” Jethwa said. “There should also be regulation on the platform through which money is being transferred.”

So, what lies ahead? According to industry experts, the RBI may have to first tighten its regulatory scrutiny on smaller NBFCs that back these loan apps.

“A few consumer protection measures that need to be tightened include tighter regulations across all NBFCs as the smaller ones are not regularly supervised by the regulator,” said Sridharan of FACE. “At some point, using technology, we will need to start regulating those smaller NBFCs that use digital skins and stay away from the supervisory radar,” Sridharan said.

This can be improved through digital supervision such that all lending entities can be monitored by the regulator in real time, using analytics, Sridharan added.

Besides, industry experts reckoned that the RBI also needs to cooperate with financial regulators and other stakeholders to ensure that all lending activities are in compliance with lending norms. No non-permitted player should be allowed on digital stores, they said.

Freo’s Varma said that the RBI could start off by differentiating between proper and improper lending criteria for digital loan apps.

“This includes a definition of who controls underwriting and collections, clarity on the brand of the lending entity, and a code of conduct on fair practices,” said Varma. “Right now, enforcement and scrutiny of players are certainly happening, and we can expect to see more on this front. ”