Register Now!“Unlock Credit” Pre-Budget discussion on “Solving the enterprise lending and borrowing puzzle in Budget 2022” 29th January at 3pm
you are here: HomeNewsBusiness

A full-stack developer is a software engineer who can take care of the full stack in web development, from the front end to the back end. Since the Covid outbreak, these roles have become the most sought after software jobs.

Most of the IT firms have revised their fresher hiring targets for the year given the sustained demand. (Representative image)

Kaushik (name changed), an engineer in his mid-20s is a full stack developer in a Bengaluru-based startup. He enrolled in an online learning platform to learn full stack development in late 2019 to hone his coding skills. Little did Kaushik imagine that the course he enrolled for would become one of the most sought-after, post the COVID-19 pandemic began.

He landed a job paying Rs 6 lakh per annum in March 2020, and this doubled to Rs 12 lakh annually a few months ago. All this was with less than two years experience as a full stack developer.

Kaushik is not alone. Benjamin (name changed) is a techie with six years’ experience earning Rs 15 lakh annually. Companies are now rolling out the red carpet, offering him a 100 percent-plus hike to make the shift. There is a 50 percent chance that he might hold out for more.

This is a scenario that would be hard to imagine even a year ago.

If you are a full-stack developer in India today, companies are willing to give you a hike as high as 120 percent, even if you are a fresher with a couple of years’ experience like Kaushik. Hikes are rarely less than 50 percent. 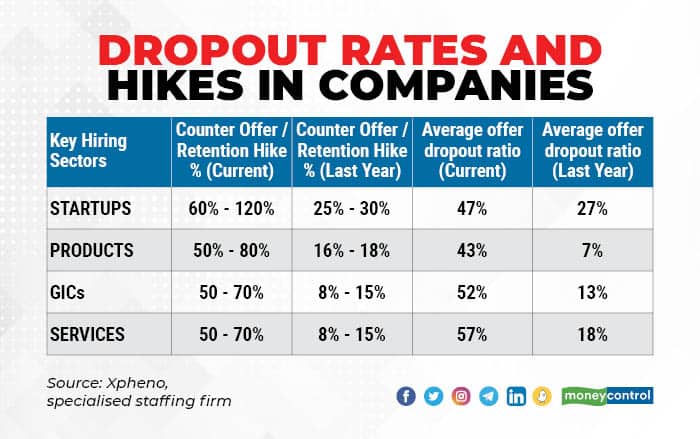 Some recruiters have called this desperation hiring. Demand continues to outstrip supply as the transition to digital takes centre stage, across sectors.

Moneycontrol spoke to industry experts and engineers to understand why there is a huge demand for this set of engineers.

Full stack development is not new and has been in vogue for some time. The term first came into existence in 2008, when mobile development became mainstream, though the idea itself has been around since the 1970s.

As the name implies, a full-stack developer is a software engineer who can take care of the full stack in web development, from the front end to the back end. The front end is what a consumer faces, such as a login page in a booking site or an OTT platform you’re browsing. The back end is what happens behind the scenes, responding to consumer demand.

Both need a different set of programming languages. The languages that are in demand right now include Angular, React, React Native, Bootstrap and Vue for frontend, while Java, Python and Node.Js are used for the back end.

Who’s hiring and where

According to a report by specialised staffing firm Xpheno, there could be more than 15,000 job openings for full-stack developers across the experience levels. Companies are willing to give a hike of anywhere between 70-120 percent in 2021, up from 25-35 percent last year. Even with these steep hikes, the report pointed out that the dropout rates are on average 50 percent across startups, product companies, global in-house centres (GIC), and IT services. Of the four, IT services companies record the highest dropout rate of 57 percent, followed by GICs with 52 percent.

“Demand for full-stack skill sets continues to grow in volume and velocity, making them among the most in-demand tech talent. Enterprises have taken to full-stack skillsets with a ‘more for less’ or ‘more the merrier’ approach to talent consumption costs,” says Kamal Karanth, co-founder & CEO, Xpheno. 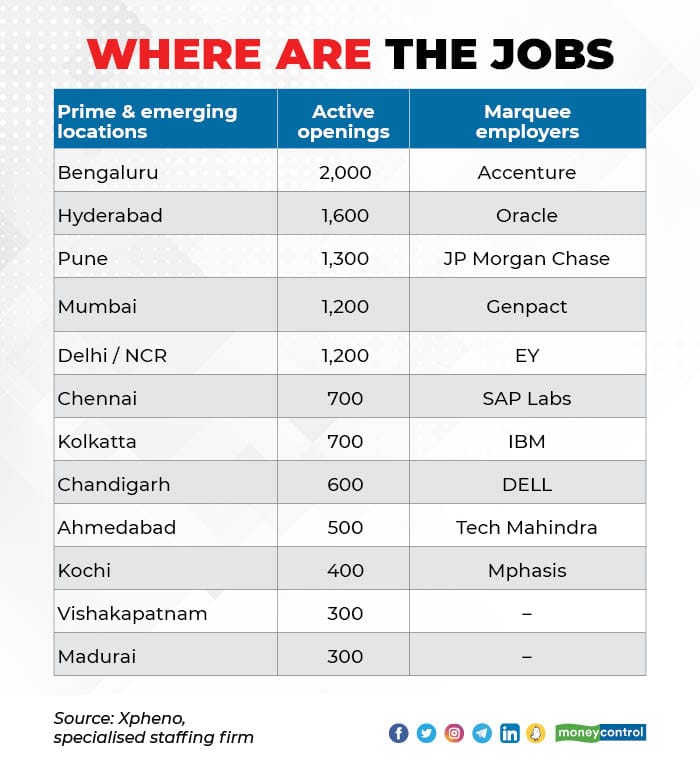 Why are they in demand?

Earlier companies had separate front-end and back-end developers, who took care of the customer-facing part and server part, respectively. Over the years, while companies have started looking at full-stack developers to take on both roles, demand has never been as pronounced as now.

It isn’t hard to imagine why this is one of the most sought-after roles in any company.

Over the last 1.5 years, how consumers interact with brands and companies has changed drastically. The number of touchpoints online has only multiplied, initially due to the pandemic and now because it has become a habit. This means that even if you are a brick-and-mortar business, you will need to have an online presence. In the case of B2B businesses, some processes have had to go online to accommodate the remote and hybrid working model.

All these would need web developers to design the front end and back end. Umang (last name withheld to protect identity), a software engineer, said having full-stack developers cuts down the time and resources needed to get a project live, which is the priority for most firms currently.

In place of two people, you need one full-stack developer to get the job done. “The company might deploy people specialised in front-end and back-end work at a later stage,” he added. This is resulting in huge demand for these developers.

Xpheno’s Karanth adds, “As enterprises move towards leaner and optimised team structures, the need and preference for full-stack engineers has grown. Enterprises that were earlier hiring separate back-end, front-end, and full-stack developers, are shifting 80 percent to full-stack hiring.

For instance, if the company gets a demand for 100 people to be trained, 50-60 per cent will be full stack developers. Over the last few months, the scale of demand has increased five times.

Mahadevan said that the company is currently on-boarding 300-500 candidates every month, 5X more than they did the previous year. “Even with this I am sitting on a demand surplus,” he said.

Like BridgeLabz, other companies such as Masai School and AltCampus, which conduct online boot camps for full-stack development, are seeing increasing demand.

Prateek Shukla, co-founder & CEO, Masai School, had earlier told Moneycontrol that the company is doubling up its efforts to reach more candidates. It is eyeing an expansion into 20 cities and plans to have 7,000 students on board over the next two quarters.