Land Bill: How NDA can make a comeback, be winner in 2016

The NDA version of the Land Act had sought to exempt five types of projects from these clauses, but lack of support in the Rajya Sabha means any version of the bill passed now will be closer to the UPA‘s original bill passed in 2013 than something more growth-friendly or radical.

The fight appears to have gone out of the Modi government on the Land Acquisition Bill. A report in The Times of India on 31 July says that the government will swallow the bitter pill and re-insert the UPA land bill’s key clauses calling for consent and social impact assessment (SIA) whenever land is acquired for infrastructure projects, or other uses.

The NDA version of the Land Act had sought to exempt five types of projects from these clauses, but lack of support in the Rajya Sabha means any version of the bill passed now will be closer to the UPA’s original bill passed in 2013 than something more growth-friendly or radical.

The projects that were earlier sought to be excluded from seeking consent were defence, rural infrastructure, rural electrification, affordable housing, industrial corridors, and infrastructure projects, including social infra projects.

According to the Times report, the government will scrap "Clause 3 and Clause 5 of the land ordinance. It would mean removing the exemption of five types of projects from the requirement of consent and SIA. The UPA law had provided for consent of 80 percent of the affected families for private projects and 70 percent of affected families for PPP projects." A Business Standard report on 1 August confirms that the NDA is about to retreat on the bill.

Accepting a super-diluted land law will be of no use in reviving industry or prising more unviable farmland away from those who cannot invest in it. So, it would be saner for the Modi government to simply withdraw the bill and try again next year when the atmospherics are better and the government's strength in the Rajya Sabha much improved. Trying to pass a hugely compromised bill that does no good will hardly be worth the loss of political capital and economic logic in making the effort.

The NDA should use the opportunity provided by defeat on the land bill to not just lick its wounds, but to rethink the bill from first principles. The UPA bill was guided by one reasonable motive and several petty political calculations, including the enrichment of its rural landlord base and winning the 2014 elections. 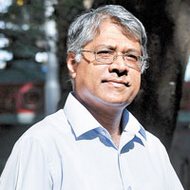 The UPA’s land law, the Right to Fair Compensation and Transparency in Land Acquisition, Rehabilitation and Resettlement Act, assumed the following: that farmers were cheated by compulsory land acquisitions in the past (largely true); and this needed to be fixed by paying them well above-market prices this time, while also seeking their explicit consent for the sale.

In the process, the bill ensured the following: any large project would take four to five years to acquire land; this land would be expensive and hence make the projects unviable or unattractive for private investment; and middlemen would become unavoidable as any large acquisition needing 70-80 percent consent requires hidden persuasion, including bribes and strong-arm tactics. To keep costs manageable, infrastructure builders would need to manipulate the accepted “market price” through bribery and corruption, because they are officially required to pay four times the “market price” in non-urban areas. The UPA’s bill was thus an open invitation to corruption and wheeling dealing in land acquisitions.

This was sought to be reduced by the NDA’s law, which at least tried to restrict the damage by excluding some kinds of projects from the need for consent and SIA while leaving the pricing multiple intact. But this is not to be.

The illogic of the UPA’s bill lay in this: it makes no sense to demand a high level of consent when the purpose of paying two times market price in urban areas and four times in rural areas was precisely to over-compensate the unwilling sellers.

So, if the NDA is going to have to rethink the bill, it might as well do a good job of it.

The first thing to mull over is this: what is the logic of 70-80 percent consent? Why not say the right to property is fundamental and 100 percent consent will be obtained in future, but only a small premium will be paid above market price. Consent presumes a willingness to sell.

And it's not as if farmers will get a rotten deal due to this. According to this story, land acquisition costs are already up six-fold over the last four years, and the UPA bill has had one beneficial impact - few farmers are going to be conned into selling cheap. So the logic of paying four times market is no longer tenable, especially if land is bought after development plans are announced.

Once there is consent, market price, or a slightly above-market price, should be acceptable in future. the real damage will be if the UPA bill has created bloated expectations from land sales among farmers.

The second issue to think about is this: most small farmers are unable to invest in farming (those holding 1 hectare or less). The logical thing to do is to give them an option outside farming, and this can only mean jobs in infrastructure, construction, small industry – all of which require land. The deal should be jobs-for-land. In other words, if the compensation either comes as a monthly income scheme for life for those handing over land, or as an annuity-cum-jobs scheme for those affected, most unviable farms will be handed over for development.

The third option is a variant – allowing long-term leases of existing land, for the same annuity incomes mentioned above. This way land need not be acquired, but can be given on 99-year leases to infra builders.

The fourth point is about economising on the use of land. While infrastructure cannot be built above the ground, there is no reason why factories near urban marketss cannot. Building regulations for industrial units need to allow vertical building subject to safety regulations and access issues. Public sector units with excess land should be leased for private factories, and railway land should be used for vertical development near urban centres and renewable energy (how about solar panels above miles of railway lines?) and other such uses.

Every setback is an opportunity to think creatively. The Modi government should go back to the drawing board on the land bill and come up with a winner in 2016.