India needs a twofold strategy to revive the economy, focusing on productive investments and a temporary income support scheme for the poor, Sonal Varma, chief economist, India and Asia (ex-Japan) at Nomura said.

In an interview with Moneycontrol, Varma said she expected the April-June gross domestic product to contract by about 4 per cent compared with January-March quarter, and that inflationary pressures are expected to remain this year.

She said Nomura had raised its inflation projections for FY22 by one percentage point and is looking at close to 6 percent on headline inflation and core CPI between 6-6.5 percent. The Monetary Policy Committee needs to shift focus from growth to inflation, and a reverse-repo rate hike is possible in the second half of this fiscal, she added.

Nomura expects half of India’s population to be fully vaccinated by December 2021, but to get there, the country needs to accelerate inoculation, which is important as it would drive monetary policy, fiscal policy and the economic outlook, she said.

The pandemic has widened the wealth gap between India’s rich and its poor. Many stakeholders, including industry bodies and economists, are calling for an income support scheme. What are your views?

I think we essentially do need a two-pronged strategy. The reality is that India has the limited fiscal space, we need to spend on infrastructure, health education. So we need to focus on these investments. But at the same time, we have to also ensure that there is a mechanism in place to support households who have been affected during the lockdown, so a mechanism needs to be in place, but I would make it more temporary, rather than making it permanent.

Cash transfer may be actually a better way to do this, where you're distributing cash transfers to a pocket of population during periods of economic distress, but you're not making it permanent, because then that opens a Pandora's box, which in turn will have macro and political implications. 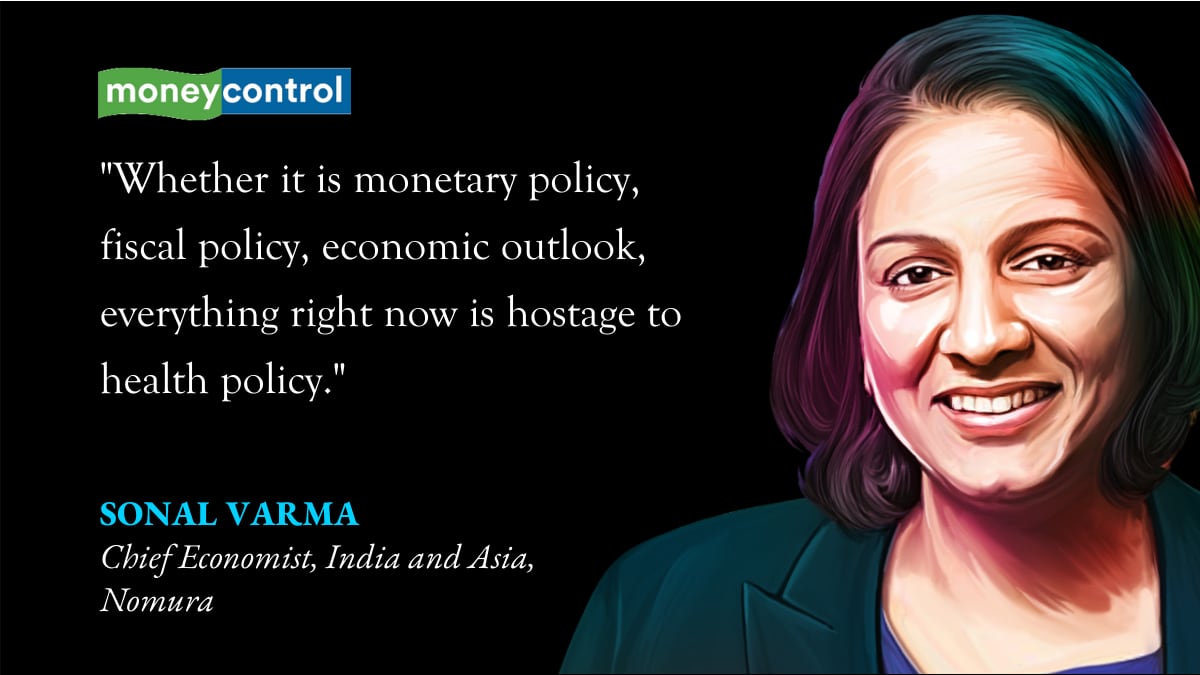 Your FY2021-22 GDP growth forecast is around 10.4 percent. What are your assumptions behind the forecast, and what makes you more optimistic than Reserve Bank of India?

I'll say that our forecast of 10.4 versus RBI’s forecast of 9.5 per cent, in this pandemic, one percentage point is within margin of error. But that's on a lighter note. More seriously speaking, I think the key question is, what is the impact of the second wave going to be in the April-June quarter GDP? And our analysis essentially shows that the economic hit will be quite small. On the whole for this quarter, we are looking at around 4 per cent contraction in GDP compared to January-March quarter, seasonally adjusted.

If you compare this to first wave impact, which was close to minus 25 per cent, it's actually a fraction. I think this assumption is essentially what sets our forecasts apart from the RBI numbers, which are assuming more of an economic damage. And the reason we have a more optimistic view is because of multiple things. First of all, unlike last year, the lockdowns were not as severe this time. We've already seen the impact on activity in April in general was not as severe. May is when the peak impact will be seen. And in June, with the reopening underway, sequentially we are already seeing high-frequency data pick up So on average in this quarter, it's not going to be as bad as whatever estimates were made based on the assumption that lockdowns will continue for much longer or people will not step out.

What is your year-on-year estimate for April-June quarter?

On a year-on-year basis, our estimate is 29 percent GDP growth.

I think the other aspect is that unlike the first wave where global growth had tanked, this time around global growth is essentially a tailwind. So the export side is definitely supportive. So when you have a mix of more nuanced lockdown where certain goods and construction activities are being allowed, and global growth and exports, which are much stronger, what comes out is that the consumption and your services side is where the impact will be majorly seen, but it's not going to be, but there will be offsets from industry and exports. Also, businesses and consumers have adapted to the new normal.

For this financial year, I think clearly the resurgence of virus remains a risk and it's really hard to predict that. But based on the analysis we've done in terms of availability of vaccines, particularly after July, plus our view that global growth will be quite strong on the whole, our view is that consumer sentiment, which is extremely depressed right now, will see a gradual recovery, and financial conditions are quite accommodative. So on the whole, we think these factors will support growth. 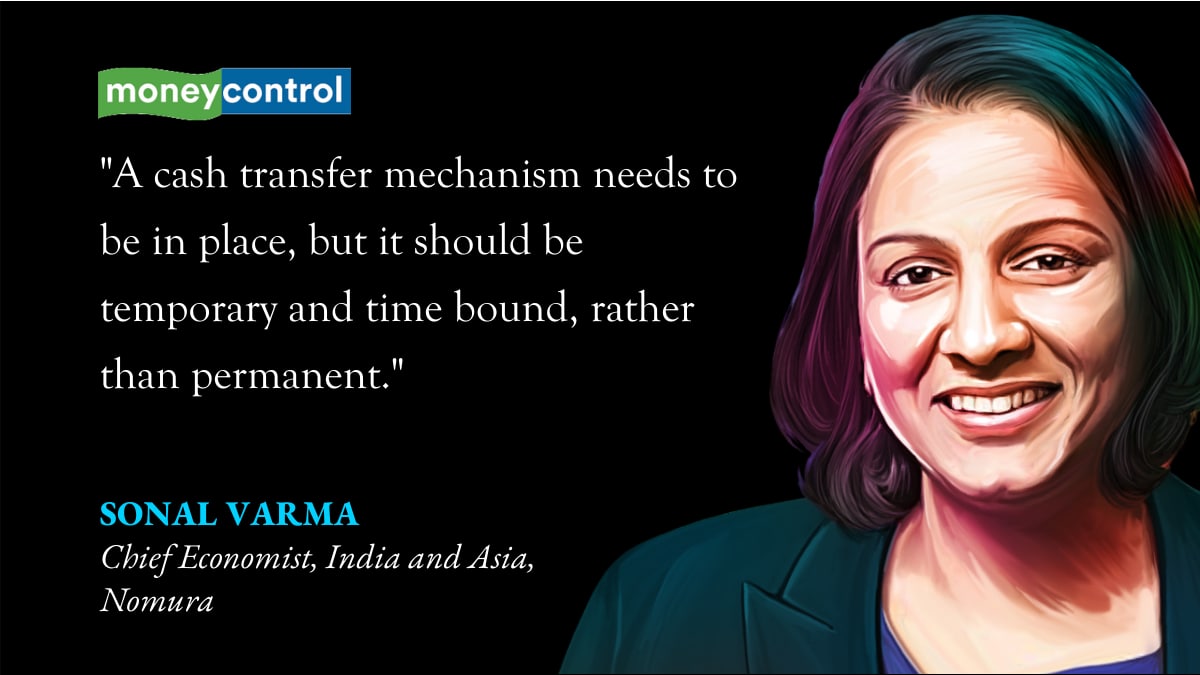 As you said, a lot depends on the pace of vaccination, and I think you expect at least 50 percent of the population to be vaccinated by the end of the current calendar year. We are right now at 3.5 percent of the population fully vaccinated. Is that good enough? Do you think that the central and state governments and the private sector need to pick up the pace of vaccinations?

What are the biggest downside risks to your GDP estimate for the current financial year? And what is your worst-case scenario? Do you have a number in mind?

We don't have a worst-case scenario in terms of numbers. Because you never know what the worst case will be. But in terms of the risk factors clearly the pandemic resurgence and pace of vaccination are the biggest factors. I would say the other risk is also inflation, because that really is squeezing profitability for firms. And it's squeezing the real incomes for consumers. So that's definitely a risk that we are monitoring.

You mentioned inflation. Retail inflation was at its highest in 6 months, while wholesale inflation touched record highs. How much of a concern is it for policymakers, going ahead, and what are your expectations from the Monetary Policy Committee?

The steep jump in inflation in May, is an across the board increase, particularly core inflation. Unlike last year first wave where it was a statistical reason, this time around these are actual price quotation collections. So, things have moved up and this is clearly surprising. And I think the crucial question is whether this is one off and whether should the unlocking lead to a reversal of some of these price increases? The answer will actually vary across categories. Typically, what we've observed in India is prices tend to be more rigid on the downside. And specifically for a number of core categories, we may not see a full reversal. So, our assumption is it's going to be more of a partial reversal of the increase we've seen. Looking beyond right now, there are a few factors that do suggest the inflationary pressures will remain elevated.

To our mind risks are very much to the upside. We have raised our inflation projections. For FY 22, we are now looking at close to 6 percent on headline inflation and core CPI between 6-6.5 percent. So, nearly a one percentage points upward revision.

On the MPC, our view is that the second wave impact is not going to be as bad as is being expected. And clearly growth needs support, but the strategy has to be on the health policy side. Rightfully the MPC has overlooked inflation so far and prioritized growth, but I think the macro conditions going forward will require inflation to get a priority. This is not imminent, we're not expecting things to change in August. But come October and beyond our view is policy normalization in India will have to essentially start because we have rates which are extremely low, we have excess liquidity that is there and monetary policy works with long lags.

Our forecast is for the reverse repo rate to be increased by 40 basis point, end of this calendar year. And we are in for a total of 75 basis point in rapid rate hike next calendar year.
Arup Roychoudhury
Tags: #Covid-19 #Economy #gross domestic product #Minimum Income Support #monetary policy committee #vaccination
first published: Jun 16, 2021 07:13 pm