Selected Articles from
Financial Times on Moneycontrol Pro
Upcoming Webinar :Register now for 'ULIP as an investment during economic recovery' powered by Bajaj Allianz
you are here: HomeNewsBusinessEconomy

Decoding the role of Finance Commission

The Finance Commission is a constitutional body formed every five years to give suggestions on Centre-state financial relations
Moneycontrol News
Apr 11, 2018 / 02:03 PM IST

In November 2017, the 15th Finance Commission (Chair: Mr N. K. Singh) was constituted to give recommendations on the transfer of resources from the centre to states for the five year period between 2020-25.  In recent times, there has been some discussion around the role and mandate of the Commission.  In this context, we explain the role of the Finance Commission.

What is the Finance Commission?

The Finance Commission is a constitutional body formed every five years to give suggestions on centre-state financial relations.  Each Finance Commission is required to make recommendations on: (i) sharing of central taxes with states, (ii) distribution of central grants to states, (iii) measures to improve the finances of states to supplement the resources of panchayats and municipalities, and (iv) any other matter referred to it. 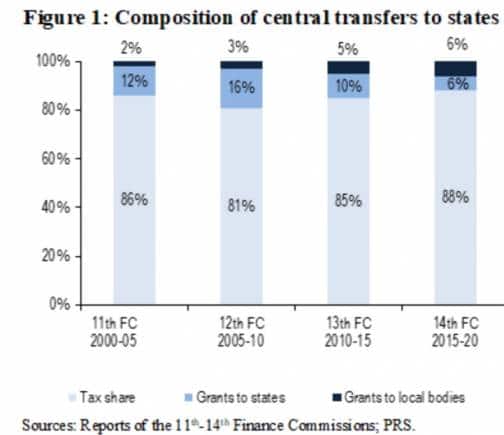 Why is there a need for a Finance Commission?

The Centre collects majority of the tax revenue as it enjoys scale economies in the collection of certain taxes.  States have the responsibility of delivering public goods in their areas due to their proximity to local issues and needs.

Sometimes, this leads to states incurring expenditures higher than the revenue generated by them.  Further, due to vast regional disparities some states are unable to raise adequate resources as compared to others.  To address these imbalances, the Finance Commission recommends the extent of central funds to be shared with states.  Prior to 2000, only revenue income tax and union excise duty on certain goods was shared by the centre with states.  A Constitution amendment in 2000 allowed for all central taxes to be shared with states.

Several other federal countries, such as Pakistan, Malaysia, and Australia have similar bodies which recommend the manner in which central funds will be shared with states.

The 14th Finance Commission considerably increased the devolution of taxes from the centre to states from 32% to 42%.  The Commission had recommended that tax devolution should be the primary source of transfer of funds to states.  This would increase the flow of unconditional transfers and give states more flexibility in their spending. The share in central taxes is distributed among states based on a formula.   Previous Finance Commissions have considered various factors to determine the criteria such as the population and income needs of states, their area and infrastructure, etc.  Further, the weightage assigned to each criterion has varied with each Finance Commission. (The writer is an associate with PRS Legislative Research)