We are planning 6-8 new launches this fiscal yr: Alembic Pharma

Speaking to CNBC-TV18 Pranav Amin, Managing Director of Alembic Pharmaceuticals, said that good Q1 numbers were led by international business. Sales of its anti-psychotic drug Abilify was one of the reasons the company saw higher sales, he said.

Speaking to CNBC-TV18 Pranav Amin, Managing Director of Alembic Pharmaceuticals, said that good Q1 numbers were led by international business. Sales of its anti-psychotic drug Abilify was one of the reasons the company saw higher sales, he said.

Revenue during the quarter grew by 25 percent to Rs 728 crore on yearly basis with international business showing a solid 72 percent growth at Rs 308.51 crore.

He mentioned that the company is planning 6-8 new product launches for the remainder three quarters of this fiscal year.

Indian generic business was down 23 percent. He clarified that 'generic, generic' is not a priority for the company. The company is pushing for branded sales.

He estimates R&D costs of over Rs 400 crore this fiscal year.

Below is the verbatim transcript of Pranav Amin’s interview to Ekta Batra and Surabhi Upadhyay. 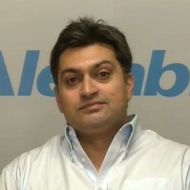 A: Yes, the numbers have come in much better than what everybody expected. One thing I have to clarify though is Q1 of last year is when we did not have any Abilify sales. We reflect the Abilify sales one quarter later, because it is through a partner, so it is not a comparable quarter. Hence, that is one of the reasons for the higher sales.

However, having said that there has been a lot of price erosion in Abilify because a lot of generics entering the market, the latest. There was a new entrant the last month as well. So, there has been erosion. What has helped us though is our own front end, Alembic, USA. They have now successfully launched about 23 products. Some are new launches; some are old launches which we have relaunched. So, they have done a good job and they have got quite a bit of market share in some products as well.

Surabhi: Can you take us through the remaining launch pipeline for the rest of the year and beyond Abilify? Which are the next big products that you expect to become material for the company?

A: Product wise, we do not disclose what we are expecting approvals on. Having said that, we have given a guidance, not guidance, I have spoken to investors that we should have anywhere between 6 and 8 new launches this year. We launched one product last quarter which was Lamotrigine chewable tablets. We should expect another 6-8 at least for the remainder three quarters of the year.

Ekta: So, what is the level that we will see your US business to stabilise at for the coming quarters? I am assuming that it is not going to show as much of a growth in the coming quarter because of the competition which has come in. So, this would be the last good quarter of Abilify sales, even though it is with a one quarter lag.

A: Yes, you are right. From next quarter onwards is when it will start reflecting the Abilify from last year. So, of course, the growth will not be there. In fact, it will probably be a degrowth because you cannot have any other product which is as big as Abilify. That is for the North American part of the business. We have few other launches. If they happen, they might get somewhere close to it, but it is tough to replace Abilify or what we had in the first few months of launch.

A: Actually this is going as per plan. You have to just go a little bit more into the details of that. The first thing is that the India generic; generic is not a priority business for us. Hence that has been degrowing. There is a little lower margin and that is something that we are not pushing.

Surabhi: Just a word on the costs. Your research and development (R&D) spend is up a little over 60 percent this time around. Are you sticking to the R&D guidance for the year and would that have any kind of additional pressure on margins in the coming quarters?

A: It may. To be honest, we have realised that for us to grow as a company, the first area that we have conquer is R&D and the only way we can catch up and get new launches is investing in R&D. I have spoken in the past that we should target or we were estimating an R&D cost upwards of Rs 400 crore for the year. So, we will touch that. Depends, it may affect the margins a little bit. But we think it is much better for us in the long run.

Ekta: What was the impact of the National List of Essential Medicines (NLEM) because I understand that there were a lot of price changes that took place within this quarter itself and second, with regards to the fixed dose combinations (FDC), though there is a stay order, are you only selling your inventory or was there any impact on account of that in your domestic business?

A: Actually the impact of NLEM for this in this last quarter was not much for us.

A: Those too, we have not done as many of them in the past, so it is not something that is really hitting us. As you see, most of our growth is coming from the specialty side, that is why we do not have too much of this over there.