In an interview with CNBC-TV18, MD & CEO Shalabh Mittal said Mercator will sustain its Q1 performance going forward with the rise in coal price boosting margins.

In an interview with CNBC-TV18, MD & CEO Shalabh Mittal said the company will sustain its Q1 performance going forward with the rise in coal price boosting margins.

The government's focus on dredging and waterways will directly benefit Mercator as it is the second largest dredging player here. The company expects good order inflow in the coming days, he added.

Below is the verbatim transcript of Shalabh Mittal’s interview to Anuj Singhal, Latha Venkatesh & Sonia Shenoy. 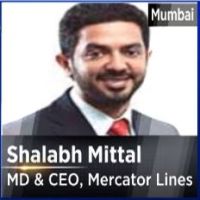 Latha: This looks like a good quarter, I guess after your Singapore subsidiary sale things are turning around. Will you be able to maintain this kind of Rs 600 crore number in the subsequent quarters as well in terms of revenue?

A: A lot of things are working out for us in, a) as you said the loss making subsidiary is out. Most of our assets are on contracts, so keeping the run rate should be okay b) as well some of our businesses are seeing little upside in the last month or so and that should also benefit us.

Sonia: After years of pain coal has now become the hottest commodity of 2016. We have seen huge surge in coal prices almost 35 percent higher. I know that the coal industry forms a big part of your own business as well. Can you tell us what kind of an impact it would have, the rise in coal prices to your business?

Anuj: The other issue that I wanted to discuss and I was having a chat with one of our market experts and we says one of the big trigger for companies is going to be the waterways and some policy on that front. If you could tell us if that space opens up what kind of potential it has for you?

A: Mercator Lines has worked very hard over the last few years, to positions itself in the dredging business, so we are now the market leaders in dredging, only after Dredging Corporation of India (DCI) for ports maintenance dredging. The government has been pushing a lot of focus on inland waterways and river dredging and all sort of dredging infrastructure.

We are trying to position ourselves there. However, having that experience and being one of the few companies in India with dredging experience, this puts us right in front to take advantage of that. So, there is a massive market which will open up which will be for river dredging and other sorts of dredging for inland waterways which is good news for us.

Latha: How quickly is the policy likely to be implemented? You have positioned yourself and you are expecting policy to roll out or has it already started rolling out?

A: It has already started and some of the tenders are out. A few local governments are working hard to figure out how to best use the rivers and waterways for infrastructure moving goods and even for irrigation and stuff like that. So, the focus is there. There has to be a bit of work which has to go and to figure out before the tenders come out.

Latha: In that case why did your revenues fall this quarter?

Sonia: Coming back to that coal mining business then how much does it contribute as a percentage of our total business and since you mentioned that the margins will get boosted because of higher coal prices, how much higher do you think your margins could go from 30 percent level that you are already generating?

A: The cost factor has not gone up. If the coal prices go up by a couple of dollars, which they have in the last few months, so USD 2 per tonne goes into our margins directly.

Latha: Are you de-merging any of your businesses?

Latha: Can you just give me a number finally, if there is say USD 1 rise in coal price how does it improve your margins?