Even though the management commentary has been bullish on near-term growth outlook, the HCL Tech-IBM deal leaves us disappointed

Highlights:
- HCL Tech acquires select software products of IBM for $1.8 bn
- Out of seven products, five were already a part of its IP partnership
- Incremental yearly revenue of $ 650 mn that renders the acquisition expensive
- Growth prospects for many of the matured products not clear

In continuation of its inorganic growth strategy, HCL Tech has announced acquisition of select software products of IBM for a consideration of $1.8 billion. HCL had existing IP partnership in the majority of these products and hence the incremental revenue contribution will be limited. But the large size of the deal will use up the entire cash that the company has and it may resort to borrowings to facilitate the closure of the transaction. While the deal raises several questions, the stock valuation looks undemanding after a steep correction.

Contours of the deal

HCL Tech is acquiring seven products from IBM with a market opportunity in excess of $50 bn thereby strengthening its footprint in the enterprise software market estimated at $ 400 bn.

Of the seven products acquired, HCL Tech has existing IP partnership for five products and only two products (namely Connections & Commerce) are new.

The cost of acquisition of these products is $1.8 billion. In this all cash deal, HCL has to pay close to 48% at the time of the closure (approximately mid 2019), and the remaining 52 percent will have to be paid post one year of closure. The deal would involve transfer of people associated with these products from IBM.

HCL is planning to fund this deal with internal accruals and may need to borrow $300 million at the time of closure because of its inability to liquidate certain investments. As of now, the company’s cash and cash equivalent stands at $1.6 billion.

Since five of the seven products  were already generating partial revenue for HCL, the incremental revenue contribution in the first year post acquisition is expected to be $ 625 mn and would go up to $ 650 mn in the second year. The margin on a steady state basis is expected to be 50% - thereby valuing the deal at 5.5X EBIDTA or 2.7X sales.

The deal opens up more questions

While the prima facie objective of the deal is to strengthen HCL Tech’s Mode 3 offerings (software IP led business) that has hit an annualised run rate of $1 billion in Q2 FY19, the rationale of spending $1.8 billion for incremental revenue of $650 million remains unclear.

What is also pertinent to note is the company has fairly long history for four out of the seven products (IP partnership for the fifth product done recently) and most of them appears to be matured products where the probability of incremental higher growth remains to be seen.

Although the management mentioned about developing services around the product and possibility of penetrating existing relationships with new products as well as acquiring new relationships; the rub off of this acquisition on Mode 1 (core services) and Mode 2 (digital) businesses is unclear at this stage.

It is difficult to gauge the exact impact on net earnings as the company has not divulged any details on amortisation. But it wouldn’t be wrong to conclude that it is unlikely to be earnings accretive from the first year although the management has guided to cash EPS (EPS + non cash amortisation) accretion in excess of 15 percent.

What is also pertinent to note that the large size of this acquisition leaves the company with very little resources for future inorganic opportunities. The management has stated its intention of maintaining payout ratio at 50 percent plus of net income.

The deal leaves us disappointed, although it was heartening to note the bullish commentary on near term growth outlook - strong order booking and robust deal pipeline indicating a comfortable medium term organic growth. The management has maintained growth forecast for FY19 at the mid-point of 9.5 percent to 11.5 percent. 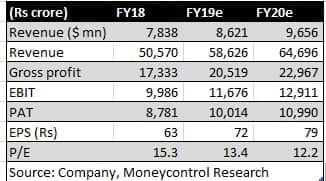 We have not tweaked our estimates pending further clarity on numbers. Given the steep correction in the stock, we feel the current valuation at 12.2X FY20e earnings is undemanding.