Below is the edited transcript of the interview.

Ekta: Your take on the Bajaj Auto numbers.

Jhaveri: The numbers have been pretty muted. Margins have come in at 17.7 percent. My expectation was somewhere around 19 percent. So, PAT has also stayed below estimate but overall margins have come in little lower compared to what we and street were expecting.

Sonia: The management in the press release talks about how exports will be back on track in the quarters to come and they had indicated earlier that the situation is improving and they expect an 11 percent growth in exports in FY16. Given the situation this quarter would you concur with the management’s views that perhaps the worst is over or do you think exports could continue to hurt the company’s performance even in Q1? 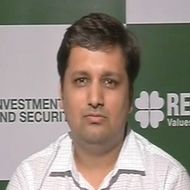 Jhaveri: There could be some changes definitely because as per what the management has been saying that exports there have not been reliable in some of the countries where there was some trouble. So, I believe what they have been saying is that probably one can see some good turns in exports. Some better numbers in exports in the coming quarter. That cannot be ruled out.

Sonia: So, if the export situation does improve then overall what do you think the blended margins or what are you pricing in, in terms of blended margins in Q1 and Q2? How much could it improve?

Sonia: And what would your rating be on the stock now, given these numbers?

Jhaveri: Currently we have a buy rating on the stock. The stock has been underperforming since quite sometime. I believe valuation-wise it is quite okay in terms of what, compared to what Maruti or some other four-wheelers are trading at.

Ekta: What is your take on the Bajaj Auto numbers? The stock has been quite volatile post numbers and now it is up around seven tens of a percent.

Gianani: Prima facie if you see the numbers, there has been a slight miss on the margin front. The margins reported by the company have been slightly lower than our as well as the consensus estimates.

We were expecting a margin of close to 19 percent but the company has slightly missed on that front reporting 17.7 percent. So, marginal miss has been there.

Sonia: Going forward what is the expectation as far as the motorcycle sales are concerned for FY16 because now FY15 is come to an end with a 15 percent drop in motorcycle sales. Given that they do have some new launches in the form of the Platina Electric Start and the CT, how much of a growth are you expecting in motorcycle sales in FY16?

We expect Bajaj Auto to slightly outperform the industry in FY16. As you rightly pointed out, the company is coming out with their new launches so we believe that the market share for the company at 15 percent which was the market share in 4Q is bottomed out. We have seen good response for the Platina Electric Start.

Also, in this fiscal the company may totally – this is what my estimate is – may do away with the Discover brand and probably may come out with a new brand or introduce more products under the Discover brand. So, probability of the market share for the company going up is high. So, I believe domestic motorcycles at the company level may grow by about 5-6 percent.

Ekta: Whether there would be any sort of one-off you would be working with in terms of expenses for Bajaj Auto in terms of the earnings before interest, taxes, depreciation and amortization (EBITDA) reported this time?

Gianani: If we have to really understand what kind of expenses or actual gains have been from the management, but if the press release states that it is a one-off item then the EBITDA stands adjusted to that extent.

Sonia: The other analyst was also telling us that perhaps the worst is over as far as exports are concerned. The market share for the company as you pointed out is also bottoming out. The stock of course as we are seeing it is now up two percent. Do you think all of the negatives have been baked into the price and now perhaps the stock could see a rebound from here? What is your own target price on Bajaj Auto?

Gianani: As of now, we have a target price of Rs 2,360, so we are positive on the stock. And as you rightly pointed out, we have to understand from the management the nature of the one-offs which have been there and probably then we would be able to take a call on the adjusted margins going forward for the company. But nevertheless, I would like to comment that if see the industry as a whole, FY16, the projections for the industry growth are not very encouraging and also another thing is that a competitive intensity in the two-wheeler segment, if you take the overall automotive industry is on the higher side. So, that may continue to put pressure on the margins. So, two-wheelers, we are not very bullish if we take the overall automotive industry.