Presenting the budget for the current fiscal year in late March, Delhi Deputy Chief Minister Manish Sisodia told the Assembly that the new liquor excise policy was expected to earn the government of the national capital Rs 4,500 crore in additional revenue.

That was almost twice what the government had expected to collect from liquor sales in 2021-22.

Such a sharp increase in revenue normally requires a jump in the consumption of alcoholic beverages. Data suggests that the target was ambitious. Year after year, the government has been forced to pare its budget estimates for excise collection to a more realistic figure when the revised estimates were prepared. Actual collections were mostly less than the revised estimate.

In 2021-22, the revised estimates were about Rs 900 crore lower at Rs 4,970 crore than the budget estimates. The Aam Aadmi Party (AAP) government expected excise collections from liquor to jump 90 percent due to the implementation of the Delhi Excise Policy for 2021-22. Excise collections in the pre-pandemic financial year (2019-20) were Rs 5,054 crore, and the target for the current year envisaged 87 percent growth over that. 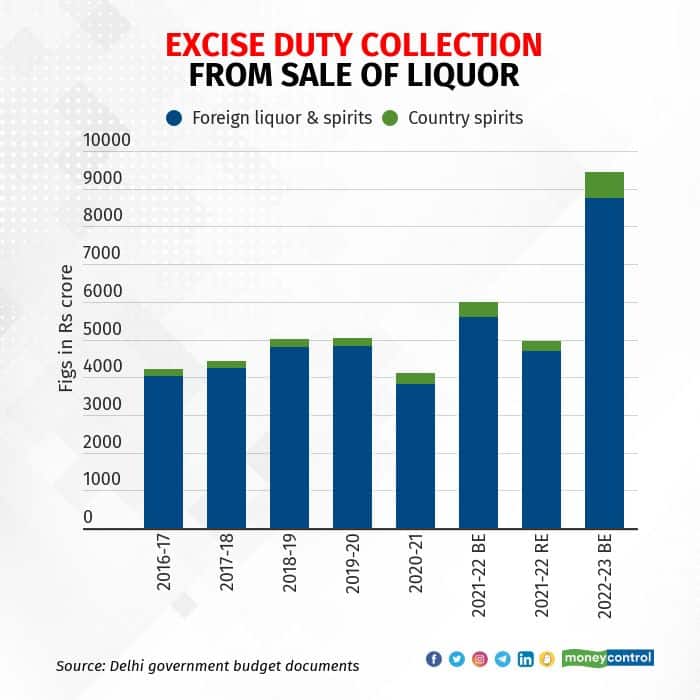 Over 95 percent of the excise duty on liquor was collected from the sale of beer, wines and spirits, all of which are commonly referred to as Indian-Made Foreign Liquor (IMFL). That share dipped only during the pandemic year when country spirit sales grew and IMFL contracted.

The AAP government expected excise revenues from country liquor to jump more than 150 percent with the implementation of the new excise policy from the levels seen in 2020-21 and revised estimates for 2021-22. Tax revenue from IMFL was projected to grow nearly 90 percent from the 2021-22 revised estimates.

So what happens to these projections now that the policy will end on August 31 and the state reverts to the old policy on September 1?

There will be disruptions as the licences of the private vends will lapse. Sales could suffer during the transition period. Many private vends are reported to have already ceased operations.

The new excise policy entailed the exit of government entities from running liquor vends and leaving it to private players. Before the new policy kicked in last November, 475 vends were operated by the four Delhi government corporations and 389 by the private sector.

The new policy carved up Delhi into 32 zones, with New Delhi Municipal Corporation and Delhi Cantonment areas as a single zone. The Delhi airport with its three terminals was another zone. Each zone, other than the airport, was to have 27 vends, all operated by private players who won the licence in open bidding.

Private sector players who had at least five years of experience in liquor wholesale distribution and turnover in excess of Rs 150 crore for three consecutive years in a block of four years from 2017-18 to 2020-21 were eligible to bid. Liquor manufacturers, brewers, wineries and bottling plants were disqualified from bidding.

The annual licence fee for 2021-22 was fixed at Rs 5 crore per vend. Other fees such as licence fees for bonded warehouses were also to be paid.

The AAP government had a lot at stake when it announced the new excise policy. Liquor taxes are an important source of revenue for states that have not imposed prohibition. But the policy ran into multiple controversies and corruption charges early.

The share of excise duties on liquor in Delhi’s tax revenues has been nearly 14 percent in recent years. That share stayed steady even during the pandemic year when sales fell due to the lockdown and prices soared as duties were raised to generate resources for government expenditure.

Delhi state budget documents show that the government expected that share to jump to almost 20 percent in the current fiscal following the implementation of the new excise policy. That’s akin to getting a high instantaneously.
Tina Edwin is a senior financial journalist based in New Delhi.
Tags: #AAP #Delhi #liquor #Manish Sisodia
first published: Aug 5, 2022 02:34 pm