Webinar :Join an expert panel for a webinar on Smart investments for a secure retirement January 28, 2021. Register now!
you are here: HomeNewsBusinesscommodities

Ratios are just division of two commodities hence forms a part of numerator and denominator so it is important to take into consideration that many times numerator might stay stable and latter might perform and vice versa.

Gold prices have had a very strong start to the New Year, with global uncertainties working in its favour. From the start of 2020, metal has traded in a broad range of $1,520 to $1,580 considering the uncertainties that took a toll on market, demand for safe haven asset has risen. Gold prices were supported at lower levels following a significant escalation in uncertainties like trade conflict between US and China, Brexit issue and tensions in Middle East. But in recent past an ease-off was witnessed due to certain developments in these uncertainties.

Central banks dovish stance and series of rate cuts last year also lent support to the metal prices. Consistent gold buying by few central banks like Russia, China, Turkey and others have been building the investors’ confidence too.

Trade truce between US and China have created quite a havoc in the market, 18 month long trade deal saw a lot of retaliatory moves from both the countries, although it took some time before both the countries calmed their actions and decided to sign Phase one of trade deal on Jan, 15th 2020. Phase one does show certain developments benefitting both sides although, few pain points still remain which continues to give support to the metal prices. China has agreed to buy more goods and services from the US according to market considerations; on the other hand U.S. has agreed to remove tariffs levied on China only after phase two deal so that US can use it as a negotiating card. On other hand, after reelection of PM Boris Johnson chances of Brexit have turned bright which is expected to close by January end. The continuous Middle East tensions and recent tiff between US and Iran took gold to its new highs on domestic front.

Apart from uncertainties there are various ratios which helps to gauge global economies trends and how gold as an asset class is likely to perform amidst the macro economic backdrop. In this report we have tried to analyze 3 different ratios which basically indicate about the risk-on and risk-off sentiment in market and are commonly used to benchmark gold to other commodities. To our surprise, all three ratios that we analyzed are indicating further bullishness for gold as compared to other asset classes.

Ratios are just division of two commodities hence forms a part of numerator and denominator so it is important to take into consideration that many times numerator might stay stable and latter might perform and vice versa.

All these ratios are used as a tool by many market experts to gauge trend and performance of precious metal sector, as and when uncertainties increase people shift to safe haven asset, resulting in increase in the ratio, hence it becomes a good indicator of economic health too. 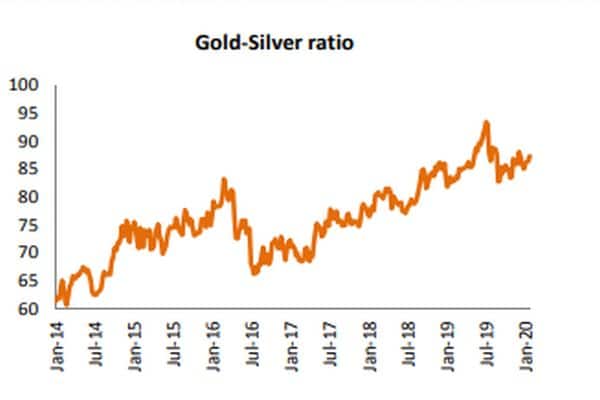 This ratio tells us that how many ounce of silver it will take to buy 1 ounce of gold. Last year, ratio had reached to its all-time highs of ~93, although after an ease off in uncertainties higher levels could not sustain.

2019 started with a very positive note for gold. With trade war uncertainties escalating, Brexit issue being dragged for over 3 years and tussle increasing between US and Middle East acted as a great mix for precious metal pack.

We expect that this year central banks will play a major role in supporting gold prices as most of the central banks have hinted that they are likely to hold rates. On other hand, BoE governor has also hinted to cut rates if needed suggesting that dovish outlook still is not out of picture. Geopolitical tensions, which have cooled off if starts to escalate again could, extend gains for precious metal. With gold, silver also rallied although there was a difference in pace of their movement resulting in gold silver ratio to touch its highs. Hence as seen in the chart if ratio goes up, it will suggest that gold will rally and silver will be stable and catch gold’s rally later or it will underperform. At current levels 88 looks like a strong resistance if breached it will further open doors to touch again its all-time highs of 93.

The ratio according to chart clearly shows that there is a good potential of it to go up that means that gold being the numerator will outperform oil. Gold’s fundamental looks strong as mentioned above, although with geo political tensions and other demand supply factors crude oil seems to be under pressure. The fundamentals for crude seem to paint a bearish picture as US and China trade tiff has impacted sentiments. Other than that, various sanctions by US on Iran, Venezuela and other countries could support crude prices, but at the same time President Trump makes all efforts to keep prices low. Also various steps by OPEC+ countries in terms of production cuts have had impact on the crude prices. As seen in chart, ratio has broken trend line and looks positive suggesting gold has a stronger bias than oil. Hence, gold might rally higher and crude oil might stay stable or see a dip.

Also read: Mandatory hallmarking of gold: Should you be worried about your uncertified jewellery?

Most economists and central banker’s use stats to justify their optimism. These economic data are important to gauge a short term impact in market, although overall health of economy can also be looked by few ratios, like gold-copper ratio.

Gold and copper don’t bear a direct relationship to each other. Gold is well-known as a safe haven asset. Investors like gold when market pessimism runs high, on other hand Copper is in demand when optimism is increasing as it is heavily used in many sectors of the industrial economy, hence it is also a well-known indicator of global economic health. Copper’s fundamentals look quite positive due to various factors like, optimism around the trade war between US and China. Now since phase one of the trade deal agreement has been signed, overall sentiment about the trade war has turned positive, also falling inventories on LME & Shanghai and gradual revival in global growth and Industrial activities generally favour’s copper.

Even though both the metals here i.e. gold and copper looks positive, the pace of gold will be faster than that of copper resulting in the ratio to rise up. As seen in this chart also it can be seen that, the ratio looks decisive, where 540-541 level is a strong support and only if that level is breached the ratio will see a downside.

Now that the ‘Phase One’ deal is done and tensions in Middle East are getting settled we expect that focus will shift to what major central bank do in their policy meeting. At the same time, how fundamentals start to behave will be important to watch. US economy has seen effects of trade war in past year, manufacturing PMI number fell to the lowest levels since June 2009. It is not only the US but also Euro Zone, UK as well Japan who have had a subdued growth in the past few years. From Federal Reserve to ECB to BoE everyone in their policy meeting has showed concerns over slowing economy and maintained an accommodative stance for the whole year.

It will be important to see whether growth of these major economies starts to pick up and that will reflect in risk-on or risk-off sentiment in the market. In this current situation we expect that gold prices could consolidate, but any hiccups related to growth, employment or trade from these major economies could start to reflect on gold prices. As we mentioned above that central banks this year will be playing a major role as continued dovish stance, gold buying by few major economies and pick up in ETF buying and rise CFTC position could continue to extend gains for precious metal.

The ratios mentioned also suggests that gold is ought to outperform other metals it is compared with. These ratios show an important long term picture for the respective commodities hence giving a better scenario analysis for market participants.