Can India's GIFT City become a rival to global financial hubs of Singapore and Dubai?

14 years on after it was announced, PM Modi's vision of setting up a world-class financial centre in Gujarat remains a work in progress but concrete steps can take it in that direction swiftly.

Now that voting in the high-stakes poll battle in Gujarat is over, Prime Minister Narendra Modi is busy with his pet project.

With the Union Budget barely two months away, the agenda assumes significance for the PMEAC, which now meets every month instead of quarterly, amid expectations of additional incentives for the financial district.

The centre has already emerged as India’s first operational smart city. It is home to a plethora of Indian and foreign financial institutions including State Bank of India, HDFC Bank, Standard Chartered, Kotak Mahindra Bank, and India’s first international bullion exchange, most of which came up over the past five years.

However, there’s still a long way to go before GIFT City becomes a global financial hub of the stature of Singapore or even Dubai.

As you enter, vast stretches of land on both sides of the smooth road give way to tall glass towers. There aren’t very many yet, but these glass facades are home to some of the biggest companies in the financial world. The built-up area is 62 million square feet.

There are two international stock exchanges, a bullion exchange and 23 international banking units with a cumulative asset size of $35.84 billion (See graphic below for what’s brewing at GIFT City). GIFT City - In A Nutshell

About 20,000 people commute to work at GIFT City every day, with electric buses to ferry them around. The hub is bustling now more than it did in the first few years after it was set up. Oldtimers say it has grown tremendously in the past five years.

Ahmedabad-based Infibeam, which employs about 650 employees globally, was among the first lot of companies to bet on the new financial hub.

“When we came in 2016-17, there was practically nothing, it was barren land,” recounts Vishal Mehta, founder of Infibeam, a financial technology company that provides payment services. “There were only two towers. No freeways from Ahmedabad to Gandhinagar… Now there are three entrances. There was no NSE, BSE – all these have come up in the last five years.”

Mehta’s office in Gift Tower 1, the first to come up in the hub, overlooks Tower 2 on one side and vast open spaces on the other sides.

However, as officials struggle to develop the area, some are reminded of the Dubai of the 90s, when it was yet to develop into the mammoth hub that it has become. 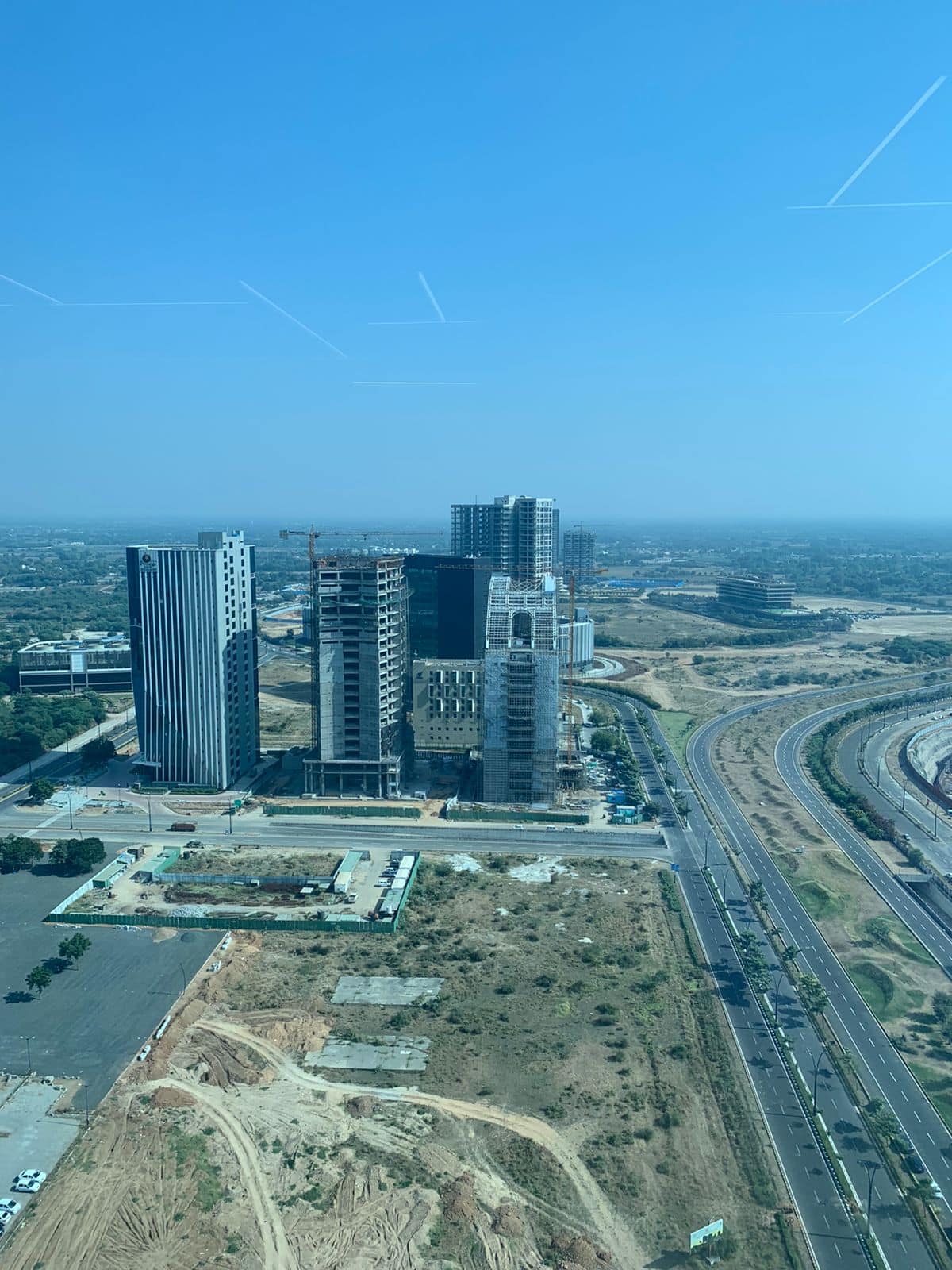 GIFT City was conceptualised and announced in 2008, when Modi was the chief minister of Gujarat and when fintech was barely heard of. The vision was to develop this strategically located area into a hub for global financial trade and business – bypassing tedious compliance norms and red tape.

The objective was to become an alternative to Dubai or Singapore.

The centre would be supported by state-of-the-art including all basic urban facilities and external connectivity.

Over the years, a slew of incentives have been announced in a bid to attract companies to GIFT City, including a 100 percent tax holiday for businesses for a decade.

With an international arbitration centre and superior infrastructure, GIFT City has now emerged as a one-of-its-kind district in the country, which other smart cities are trying to emulate.

“Everyone told me that nothing will come up here, but the quality of infrastructure here is far superior, and for me, it was a concept that was forward-looking,” said Mehta of Infibeam, who moved from Ahmedabad.

Many had written off GIFT City until five years ago. However, as successive Union Budgets since 2015 announced incentives for GIFT City, it grew.

The International Financial Services Centre, which caters to overseas customers dealing with finance, financial products and services across borders, was started in 2015. The IFSC Authority, a unified regulator for all international financial services, came up in 2020, inspiring confidence among the financial community.

The City, located on the banks of the Sabarmati River, is developing residential complexes and cultural centres. The riverfront is slated for a facelift with cafes and restaurants. Foreign universities are in advanced talks to open local campuses, which could transform the culture of GIFT City. 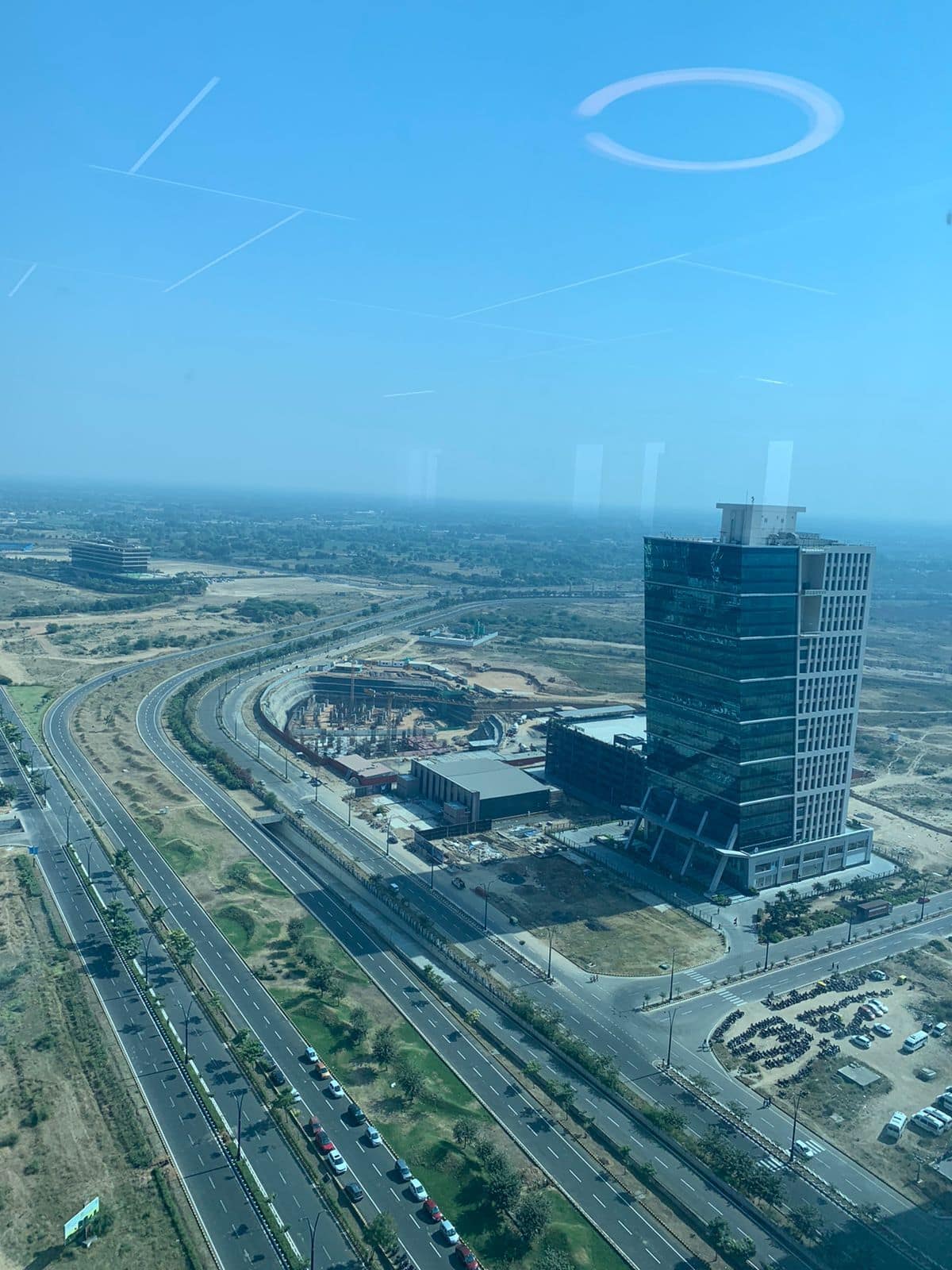 Lilavati Hospital and Research Centre, based in Mumbai, is setting up a facility in GIFT City. A Jamnabai Narsee School for children of residents of Gandhinagar, Ahmedabad and GIFT City has also come up.

GIFT City is emerging as a hub for aircraft leasing in India; external commercial borrowings have taken off, and bonds are being issued in GIFT City, a market that has shifted from Singapore.

Stock trading volumes have increased since the IFSC Authority was created – from $3.4 billion in 2020 to an average of $14.6 billion a day in 2022 and banking transactions have jumped to $303 billion from $45 billion.

The bullion exchange at GIFT City was set up in 2020. Seventy-five jewellers that meet the criteria specified by the regulator have been issued certification to import gold directly on the exchange. The number is likely to go up to 110 shortly.

“We are also promoting ourselves as a big vaulting hub – for global and regional players to vault their gold and silver here – with a caveat that from this hub they can re-export without any customs duty,” said Ashok Gautam, managing director of the India International Bullion Exchange. “Because there is no customs duty here, dollar flow can happen without any hindrance. This provides a platform for global players to trade on an international bullion exchange.”

Experts also see the easing of rules and regulations aimed at building GIFT City into a global financial hub as a step towards internationalisation of the rupee.

Yet, unlike most financial districts, the vibe seems to be a bit dull at GIFT City. In the middle of a work day, the city’s roads and pavements are deserted. Despite its avenues, a city-wide, centrally controlled and energy efficient air-conditioning system, an underground tunnel for amenities (See video on tunnel that runs through GIFT City) and glass buildings, GIFT City does not feel like a throbbing financial hub. Prohibition of alcohol in the state is a prickly issue. Businesses have had to field questions on whether alcohol will be permitted. On record, political parties insist that alcohol will not be permitted in the land of Gandhi. However, the rules could be eased for alcohol consumption.

The other issue is taxes. Fund managers and investors in Mumbai, who requested anonymity, said while the government has done an excellent job on rules and regulations, it has failed in inspiring confidence on taxes.

“GIFT City is an offshore jurisdiction, but our Central Board of Direct Taxes is confusing people. There has to be clarity that Indian tax laws won't apply there,” said a Mumbai-based fund manager who has been advising the government on GIFT City. “Rules are drafted in a manner where they can be read both ways. Today, there is a government that is pro-Gandhinagar, unequivocal regulation should be there.”

Even if an Indian company sets up a subsidiary in GIFT City, there’s no certainty about the tax treatment.

“We don’t want a situation where the CBDT says we can’t guarantee that the parent company won’t get a tax notice,” said a representative from an Indian financial company with a base in GIFT City.

The other area that needs to be addressed is getting people to GIFT City.

India has lost high net worth individuals to other countries over the past few years and people are also leaving Hong Kong for Singapore, says Nilesh Shah, MD of Kotak Mutual Fund.

“We have to bring them to GIFT City. The best solution we have suggested is that a person staying in Gandhinagar for 120 days should become eligible for offshore jurisdiction and tax exemption,” Shah said. “The rest 180 days can be spent in Mumbai. Because people don’t want to move to Gandhinagar yet. This is our suggestion to attract people from Hong Kong and that way GIFT City also gets further developed.”

A start has been made, but for the city to evolve further, what’s needed are bold strides and not incremental steps.

The idea is to build a city that is liberalised, allows for innovation, and is a laboratory for products and aspirations, a search that has taken Indian companies to other countries.

With PM Modi being the driving force behind the idea, GIFT City is well poised to take on the mantle provided the intent is backed by definitive action.