People queue outside a bank to exchange and deposit their old high denomination banknotes in Masuda village in the desert Indian state of Rajasthan, India, November 15, 2016. REUTERS/Himanshu Sharma - RTX2TPVT

Papia Ghosh Dastidar, 63, has been visiting a branch of Punjab National Bank for several weeks in the recent past, trying to submit the death certificate of her mother and claim the amount left in her savings bank account as the nominee. Every day, she has had to stand in a queue for hours and the amount still hasn’t been transferred to her.

“I am a senior citizen myself. Standing in a queue for so long and coming back repeatedly is too difficult for me,” said Dastidar, a resident of Kolkata. The situation is no different in cities such as Bengaluru, Mumbai, and New Delhi.

Deep Samaddar, 31, a resident of Noida, chose to have his salary account in a private bank to avoid the bureaucratic style of functioning associated with public sector banks.

“I had an account with my mother at the Bank of India, but to get one simple thing done, we had to visit the branch so many times that it becomes difficult,” Samaddar said.

Many customers of state-owned banks have been complaining of poor services, as evident from their social media posts. The complaints include having to stand in queues for hours, visiting a branch repeatedly to complete one task, and regularly hearing that the person whose sign-off is needed is on leave.

Customer service is deteriorating in many branches of public sector banks because there just aren’t enough employees staffing them. One the one hand, state-owned banks have scaled back recruitments and on the other, unhappy employees are leaving public sector banks in search of better opportunities.

There is hardly one employee for every 1,000 customers in most public sector banks and this increases the work load on existing staffers, bankers said. In private banks, the employee-customer ratio ranges from one in 100 to one in 600.

Considering career prospects and the work environment, many PSB employees, especially youngsters, prefer to join a private bank or company instead of working in a public sector bank.

“There is an aspirational aspect… Youngsters with good academic backgrounds are comparing themselves with others in the private sector like IT companies... Plus, there are quick promotions in the private sector, which don’t happen here,” said BN Mishra, a senior advisor at the Indian Banks’ Association.

Bankers pointed out that public sector banks have cut back on hiring over the years.

“Recruitment has been almost nil in PSBs. The recruitment is either happening through contract basis or a very few placements are happening through lateral entry at the higher level,” said a managerial-level employee with Bank of Baroda (BOB), requesting anonymity.

According to the employee, there has hardly been any active recruitment in the past five years.

“The problem is that the PSBs have to continue with several branches, especially in remote rural areas, even if there is zero profit from those branches. Since profit is going down or branches are running in losses, the impact is evident on the employees. So, there is hardly any initiative to hire more employees,” he said. 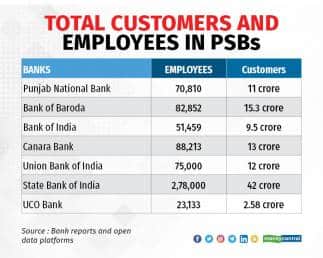 “There is a big shortage of employees. It is very difficult for an officer to cope. Since there is outsourcing, banks don’t want to recruit and would rather switch to contract-based jobs that are cheaper,” said CH Venka, a representative of a banking union.

Bankers from PSBs also agreed to the fact that there has been hardly any recruitment in most of the PSBs during and after the pandemic. “During the Covid and thereafter, the recruitment process is almost stagnant, except those who have been outsourced,” added the employee of BoB.

With the quality of banking services deteriorating, customers are switching to private banks for better services. Mishra of IBA pointed out that salaried individuals prefer to open accounts in private banks. Even if they have accounts in state-owned banks, they avoid going to the branch and instead transact online. “In my branch, we have almost 20,000 accounts and we have seven employees, three officers including managers, and three clerks including the cashier and one peon. Many people could get jobs if the government starts hiring more and it would take away some of the stress on current employees too,” said a young employee of a public sector bank based in Kolkata, requesting anonymity.

Ashvin Parekh, a banking advisor, agreed that the number of PSB employees as a proportion of customers has been declining, a trend that built up in the early 2000s as private banks intensified competition.

According to retired bankers, the government cut PSB staff strength on the assumption that competition between employees would spur efficiency.

“Over a period, the workforce has not expanded, but the workload has gone way higher,” said Naresh Malhotra, formerly with the State Bank of India.

Alongside, an issue that affected public sector banks was the sudden rise in the number of customers due to financial inclusion schemes such as Pradhan Mantri Jan Dhan Yojana, which has benefitted over 455 million people, giving them a basic savings bank account and access to other services.

“In the early 1990s, employment was frozen for 10 years and many of those who joined prior to the 1990s are retiring now,” added Mishra.

No steps have been taken to replace the retiring employees and those who lost their lives to the pandemic, he said.

Many youngsters working in PSBs are leaving to join banks and companies in the private sector, saying the perks associated with government jobs no longer exists.

“One of the major reasons people wanted government jobs was pension benefits. But those who are joining post-2004, we don’t have any pension benefits,” said a young professional who worked at SBI as an officer for a couple of years and shifted to a private firm.

Another factor is the disproportionate rate of increment in pay scales.

“The pay scale is quite decent for probationary officers and the junior management, but the problem lies in the increments. As we grow, the salary doesn’t grow as per the ranking,” said Rahul Kulkarni, who left a PSB to join a private firm. “The effort-to-rewards ratio at a PSB is way less compared to the private sector even though you have to put in the same amount of work.”

Bankers claim that PSB employees, irrespective of their position, rarely get a proper work-life balance.

“Employees have to work beyond normal hours and they have to extend their responsibilities beyond their assigned roles,” said Aniket Ravindranath Sabale, who left a PSB to join a private firm. “Moreover, the major challenge often is in finding a replacement in times of an emergency. When a manager or associate is on leave, the work load shifts to the other employees, leading to burnout.”

In many cases, PSB employees fail to get leave if there is an emergency at home or a wedding to attend, upsetting their work-life balance. For such workers, the prospects in a private bank appear to be brighter.

“When employees are open to work hard, they have the feeling that they will go to the private sector and get better paid. May be the perks are better in PSBs, but the salary is hefty in private banks and that attracts the youngsters,” said the Bank of Baroda manager.