HDFC Bank and ICICI Bank have launched campaigns to lure festive shoppers with discounts on a range of products and services.

Banks are chasing retail borrowers, betting big on festive demand and offering lower interest rates and tempting deals in a bid to boost credit growth after a lull brought about by the pandemic.

In recent weeks, big and mid-sized lenders have hit the streets with a range of shopping discounts aimed at the festive season, the busiest time of the year for shopping.

The websites of public and private sector banks are full of lucrative shopping offers and a range of discounted banking products. Large private banks including HDFC Bank and ICICI Bank are providing a substantially higher number of offers.

HDFC Bank recently launched 12 discount offers under its Onam “Festive Treats” campaign in Kerala, which will be valid till September 30.

ICICI Bank started a “Monsoon Bonanza” offer on its website where customers can shop for a range of products with higher discounts.

Axis Bank launched the Kochi1 prepaid card for travel on the Kochi Metro, which offers a 20 percent discount on the fare.

“We are keen to capture and enhance the true spirit of Kochi this festive season with new benefits and offers on the Kochi1 card,” Axis Bank’s president and head of cards & payments Sanjeev Moghe said at a recent card launch.

“…the growth is expected to sustain at these levels for some time, especially with the festive season around. The third quarter is the time where maximum demand for loans comes due to the demand and most of the mid and small enterprises will be having major activity during this period,” the MD said.

Banks are chasing depositors, too.

State Bank of India has launched an “Utsav” deposit scheme under which it offers interest of up to 6.10 percent per annum for a tenor of 1,000 days. Canara Bank and Union Bank of India are among the other PSU banks offering similar products.

Y.S. Chakravarti, MD of Shriram City Union Finance, said “the spirit of celebration is finally back” as the pandemic ebbs and positive consumer sentiment is expected to drive sales and in turn disbursements.

“Urban demand has improved and the normal monsoon is reviving confidence in demand recovery in rural India,” he said, adding that pre-festive demand indicators for August have been encouraging across two-wheeler segments.

“We expect the demand momentum for two-wheelers to sustain into the festive season of September-November 2022. The entire two-wheeler ecosystem is revved up to capitalise on this high demand – from the manufacturer to the dealer to the financer,” Chakravarti said.

Raul Rebello, chief operating officer at Mahindra Finance, said the overall loan book for NBFCs stood at Rs 25 lakh crore at the end of March and is expected to grow 11 percent to 12 percent during FY23.

Most NBFCs cater to largely underserved sections of the population, Rebello said, adding that segments such as auto loans, microfinance and consumer durable loans are poised to clock high growth.

“Vehicle buying accelerates during the festival seasons as it is driven by sentiment. With the easing of supply, the passenger vehicle segment will definitely see good traction during the festivals. Moreover, manufacturers have introduced new models that will enhance sales during the upcoming season. Thus, our overall stance is optimistic as we enter the festive period,” he said.

"Obviously, we are looking to attract more customers, but at the same time, we are also trying to bring back the inactive customers as well," MD said.

"We foresee the credit demand to definitely pick up in the festive season. The consumer loans will witness a spike in this festive season. As per the recent CRISIL Report, NBFCs are expected to see a considerable splurge in the AUM’s attributing to the growth in economic activities," he added.

Personal loans and credit cards are unsecured credit and considered risky in nature. However, analysts said the underwriting practices of banks have improved significantly over the past few years and they don’t see any stress developing on asset quality in the near term.

According to Sanjay Agarwal, a senior director of CareEdge, the underwriting standards of banks have improved from two years ago. Newer loans have a lower credit cost and loans that originated during Covid-19 also have a lower cost, he said.

“As per our estimates, banks’ average FY23 loan growth will be in the 12-13 percent range on account of a low base. Capital market issuances remain low, indicating bank loan growth may sustain,” Agarwal added.

Non-food credit by banks increased 15.1 percent to Rs 123.36 lakh crore as of July 29, according to the Reserve Bank of India. A Moneycontrol analysis showed that industry-level credit growth was the highest in about 10 years. 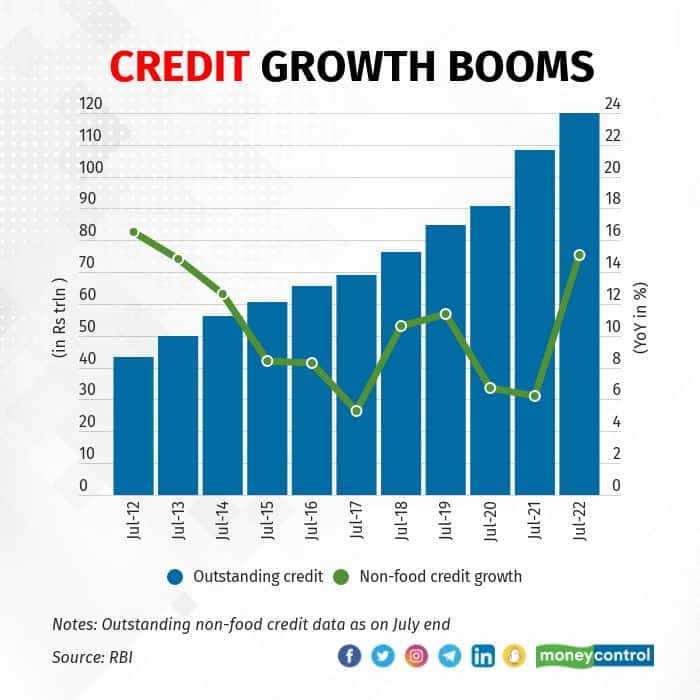 After a lull in credit demand due to Covid-19, bankers are looking to cash in on credit demand and do not foresee higher inflation playing spoilsport. Analysts, too, are pencilling in double-digital credit growth estimates for banks in view of higher demand.

Jindal Haria, director at India Ratings and Research, said there is significant growth in the unsecured retail books of banks.

“Banks have access to data and analytical abilities far more than in the past and penetration levels are some distance away from alarming. Also, banks have not gone all out in the last two years and are now catching up,” he said.