Certain provisions of the Assam Microfinance Institutions (Regulation of Moneylending) Bill, 2020, are a repeat of the 2010 Andhra Pradesh Microfinance Bill, industry officials say. These rules could potentially harm the sector.

A law enacted by Assam on December 30, 2020, to regulate microfinance institutions (MFIs) threatens to pose severe operational challenges to the microlenders operating in the state. This could possibly harm the credit culture of borrowers in other neighbouring states as well, a section of industry feels.

The Assam Microfinance Institutions (Regulation of Moneylending) Bill, 2020, was enacted to “protect and relieve the economically vulnerable groups and individuals from the undue hardship of usurious interest rates and coercive means of recovery by Micro Finance Institutions or Money Lending Agencies or Organizations…,” the state government said.

The law intends to create an effective mechanism to regulate the MFIs including the NBFC-MFIs that are regulated by the Reserve Bank of India (RBI).

What does the law says?

For instance, the Assam Bill stipulates that all MFIs in Assam need to apply for registration before the local authority within 30 days from the date of commencement of the Act. This registration is valid for a period of two years.

Secondly, according to the Act, all schedule of loan repayment shall be made by the borrower at the office of the Gram Panchayat or at a public place designated by the Deputy Commissioners.

Third, partners, directors, and employees of organization engaged in coercive lending practices will be subjected to up to three years of imprisonment and Rs 1,00,000 fine.

Fourth, no MFI should extend a further loan to a borrower where s/he has an outstanding loan from a bank unless the MFI gets a prior approval.

Fifth, a borrower cannot be a member of more than one Self-Help Group (SHG) or Joint Liability Group (JLG) and not more than two MFIs can lend to the same borrower. 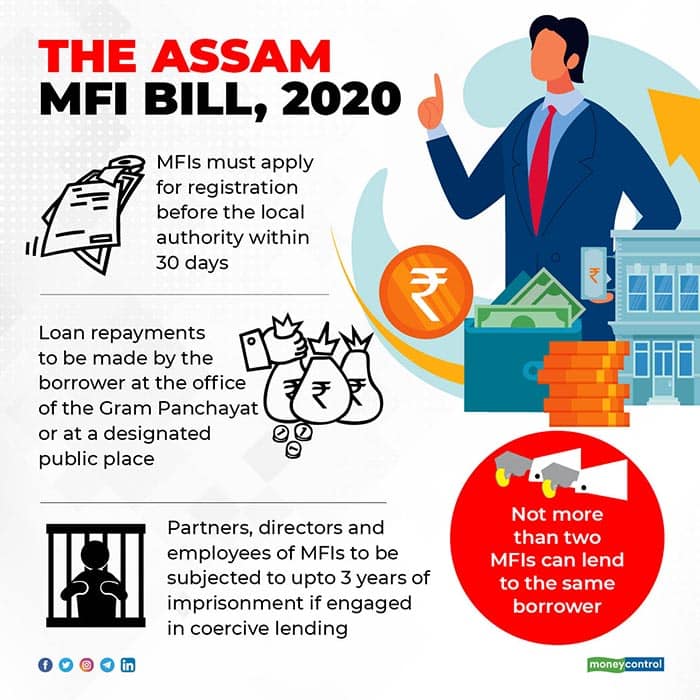 The AP Microfinance Bill which had imposed similar restrictions on operations of MFIs, especially with respect to collection of dues, had unleashed a crisis in the sector. This subsequently forced a significant number of MFIs to shut down or move out of the state. Among the larger AP-based MFIs which had to shut shop was Trident Microfinance.

“It is unfortunate that yet another state has promulgated a law same as the Andhra Pradesh Bill which will have a larger impact on the microfinance sector,” said Kishor Kumar Puli, who used to head Trident and now is the Managing Director of Pradakshana Fintech, which operates as a banking correspondent, when contacted by Moneycontrol.

The AP Act also triggered major changes in the regulatory structure in the Indian microfinance industry. The RBI created a separate NBFC-MFI category to bring in discipline to the sector.

An email sent to the RBI seeking its response on the Assam MFI Bill didn’t elicit any response till the time of filing of this story.

P Satish, Executive Director of Sa-dhan, an industry association, said the new Assam Bill is indeed a worry for the sector, but not to the extent of the problems caused by the AP Bill.

The bill is a concern, but it is not similar to the AP Bill
- P Satish, Executive Director of Sa-dhan, an industry association

“The bill is a concern, but it is not similar to the AP Bill,” said Satish. “Some clauses like fresh registration within 30 days and the power to state authorities should not harm the normal functioning of MFIs. Except that, most of the provisions in the Bill are same as stipulated by the RBI and in the code of conduct set by the industry,” he said.

Microfinance Institutions Network (MFIN), another association of NBFC-MFIs, was not immediately available for comments for this story.

How will it harm the sector?

According to industry officials, stipulation to collect dues at gram panchayat offices or other places approved by local authorities will prove detrimental to the industry because of likely political intervention and involvement from local officials. “Why would a borrower go to panchayat office to pay up his dues? This is exactly what happened in AP too,” said one of the officials who didn’t want to be named.

Also, registration within 30 days could pose challenges to many existing MFIs, Puli said. Assam is a key state for microfinance industry in the eastern part of the country although the concentration of MFIs is less compared to southern states like AP and Karnataka.

The Assam Bill also puts a cap of Rs 30,000 to 50,000 for tea plantation workers and Rs 1,25,000 for other borrowers. According to Macquarie, the Bill will have a medium to potentially long-term impact on the growth of Bandhan Bank in the state since its business is concentrated in the region.

An email sent to Bandhan Bank seeking its response on the Bill remained unanswered till the time of filing this story.

Microlenders are slowly recovering from the shock inflicted by the COVID-19 pandemic last year on their operations. According to CRIF Microlend, total loans of the microfinance sector stood at Rs 2,24,000 crore in Q2FY21, declining by another 1.15 per cent from Q1FY21. Disbursements regained pace in Q2FY21, as lending operations resumed in the new normal, the agency said.

A question arises on where the Assam MFI Bill undermined the authority of the RBI on MFI regulation. The state government reportedly didn’t accept the suggestions of the central bank while passing the Bill.

“The RBI wrote a letter to me yesterday and asked to consult it before passing the Bill. It suggested some amendments also. How can the RBI come into the picture? This is a privilege of the House. If I place the letter in the House, the RBI will face a privilege motion," Assam State Finance Minister Himanta Biswa Sarma was quoted as saying in a Times of India report.

So, what lies ahead for microlenders operating in Assam? Certain provisions of the Assam Bill could throw major challenges to microlenders in the state impacting the normal operations. Particularly, the requirement of compulsory registration within 30 days and collection of dues in gram panchayat offices designated by local authorities could also create major hurdles for MFIs’ smooth operations.