As India designs its carbon trading market, here are pitfalls it must avoid

Big corporations must not find it cheaper to buy their way out of regulations rather than upgrade their factories with emissions-reducing technologies. But a steep carbon price will put smaller firms out of business

Last year, the India division of the World Resources Institute (WRI), a global research non-profit, designed a mock carbon credit trading marketplace and invited 20 leading listed companies to participate. In three rounds of trading held over a 12-month period, WRI, and its test participants, learnt exactly how not to create a lopsided carbon market.

“A carbon market will fail if you start off with only energy-intensive industries like cement or steel,” Ulka Kelkar, director, climate program, WRI India, told Moneycontrol.

Since such industries are big emitters of CO2, they might not be able to implement significant reductions immediately and will naturally turn to carbon credit trading to compensate for the shortfall. For this reason, the carbon credit platform should also host other low-emission industries which can easily overachieve their targets and sell the excess credits in the marketplace that steel and cement plants can then buy.

“There needs to be a sufficient number of sellers that can match the demand from potential buyers of carbon credits. So the market needs diversity both in size and the sectors in which these businesses operate. It must also provide a consistent price for carbon, so that businesses are incentivised to invest in emissions-reducing technologies for the long-term,” Kelkar said

These lessons are sure to come in handy for PwC, which recently won the Bureau of Energy Efficiency (BEE) tender to design and implement India’s national carbon market.

Decisions ahead of COP27

August saw a flurry of decisions by the Indian government on its climate goals, no doubt to place its negotiating team on surer footing as they head to the 27th Conference of Parties (COP27) in Egypt in November.

With prime minister Modi pledging at last year’s COP26 at Glasgow that India would generate 50 percent of its electricity from clean sources, as also cut the carbon intensity of its economy to less than 45 percent (of 2005 levels) by 2030, these decisions were necessary for Indian promises to be taken seriously at the November talks. Hence, on August 3, the union cabinet approved the updated nationally determined contribution, ratifying the 2030 goals above, which it will now submit to the United Nations Framework Convention on Climate Change (UNFCCC).

Then on August 8, the Lok Sabha passed the Energy Conservation Amendment Bill, 2022, that mandates a minimum use of non-fossil fuel sources for industry and paves the way for the creation of a carbon-trading market. The bill will be tabled in the Rajya Sabha in the winter session of parliament.

While public response to the government’s announcements has been welcoming, behind-the-scenes, many are concerned about the shape and form carbon trading will take in India.

“I’m certain that carbon pricing will be one of the key levers to decarbonise India over the long-term,” Prabodha Acharya, chief sustainability officer at the $13 billion JSW group, which produces steel and cement and generates power from coal-fired plants, told Moneycontrol. 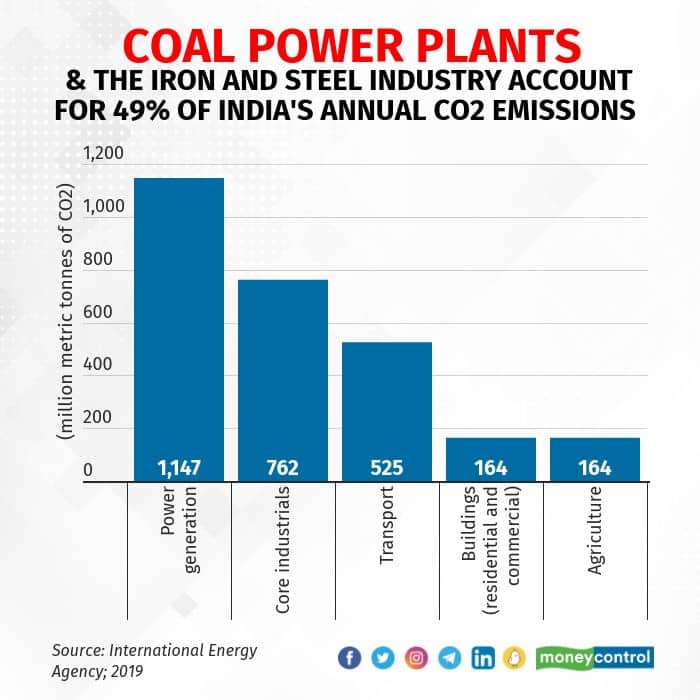 “The carbon market, in its first phase, is likely to be an amalgamation of these existing mechanisms. As it matures, we might see a cap-and-trade system being introduced, in line with India’s 2070 net zero commitment,” he added.

The PAT scheme is a flagship programme by the BEE to reduce fossil fuel-based energy use in 13 energy-intensive sectors, including thermal power plants, cement, metals, fertilisers, petrochemicals, and textiles.

Over six trading cycles starting in 2012, BEE restricted the amount of energy these industries could consume and set a compliance deadline.

Industries which couldn’t meet their targets could buy energy saving certificates (ESCerts, measured per tonne of oil equivalent - TOE) in an open marketplace from competing industries that over-achieved their targets.

However, a 2021 study by the Centre for Science and Environment (CSE) found that the actual reduction in energy consumption was feeble.

For instance, participants in the thermal power sector reduced emissions by 24.85 million tonnes of CO2 over a six-year period, which is only 3 percent of the sector’s total annual emissions. The weighted average price of one ESCert was Rs 700, a fraction of the Rs 4,020 investment required to reduce a TOE of carbon emissions annually.

Simply put, industries found it cheaper to buy their way out of these regulations rather than upgrade their factories with emission-reducing technologies.

What was touted to be the world’s largest emissions trading platform is now struggling with low volumes and intense lobbying from energy intensive industries to cut targets.

“Singapore has imposed a $5 per tonne carbon tax, but its government has to measure emissions, collect the tax and deploy the money. A private marketplace can enable these investments faster, as long as we can ensure that it won’t become an entry barrier for new firms,” Dabkara said.

Acharya echoes this view, that a very steep carbon price, caused by sudden and excessive targets, will force medium and small firms out of business.

“This can be particularly challenging for small sponge iron factories, which have highly energy-intensive manufacturing processes and little money to invest in new technology. So there might be some consolidation here, and the primary steel production might shift to the big industrial houses.

“If you look at how the West has cut emissions, all the breakthrough technology they have introduced is highly subsidised by the government. In India, neither the government nor the private sector has access to this scale of investment,” Acharya added.

At COP26, Modi argued that India needs $1 trillion in climate funding to make meaningful emission cuts by 2030. This is many multiples of the $100 billion that rich nations pledged they would channel to the developing world annually from 2009 to 2020, a decision taken at COP15 in Copenhagen.

This money never came through. The international aid charity Oxfam estimated in its sample year (2017-18) that only $19-22.5 billion was actually transferred.