Analysis: Which engineering degree is the most lucrative

Moneycontrol dives deep into how salaries of engineers in various disciplines -- software, mechanical, electrical, automobile and so on – compare and how they go up the ladder.

When you start pursuing higher education, you will probably hear some random acquaintance of your parents advise you on which discipline you should take up. Science students will in all probability be told to join an engineering course.

Indian colleges produce over 1.5 million engineers every year, according to industry estimates. They come from different disciplines they chose on the basis of different parameters, the salary they would earn being one important factor.

According to the Ministry of Education, over 930,000 students were enrolled in computer science engineering in the academic year 2020.

The second most highly sought-after discipline was mechanical engineering with more than 680,000 students enrolled in the course in the same year.

Moneycontrol dives deep into how salaries of engineers from various disciplines -- software, mechanical, electrical, automobile and so on -- compare and how they go up the ladder.

Data from the jobs portal Monster.com (September 2021-22) suggests software engineers are the highest paid recruits. The difference in remuneration is largely owed to the fact that Information Technology (IT) companies outweigh core engineering firms in terms of size.

“The salary is no bar for the niche skills in all the categories,” says Sekhar Garisa, Chief Executive Officer of Monster India. 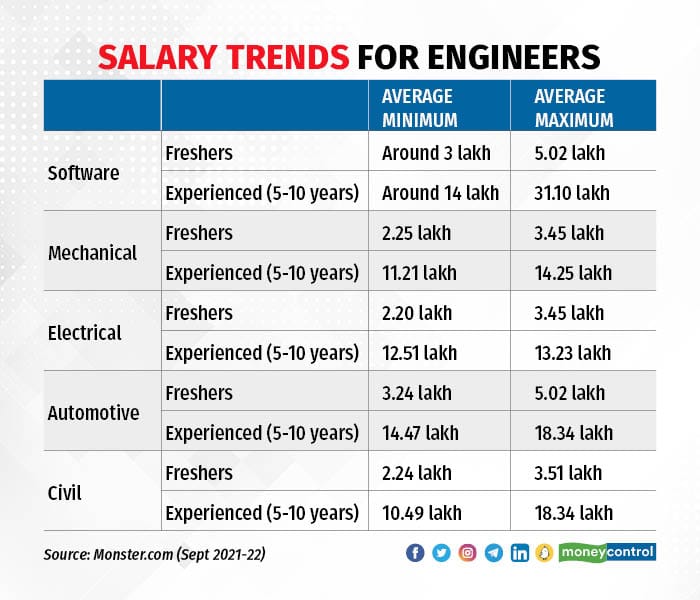 The only field that comes close to software in terms of a new recruits pay is automotive engineering. The gap between the average maximum salary an experienced professional receives in software versus automotive is much more (over Rs. 12 lakh).

ALSO READ | IT vs Non-IT sector: How entry-level salaries have evolved over 5 years

Salaries start to converge at the top

After computer science, mechanical engineering is the most popular choice with around 685,000 students enrolled in the discipline in 2020. 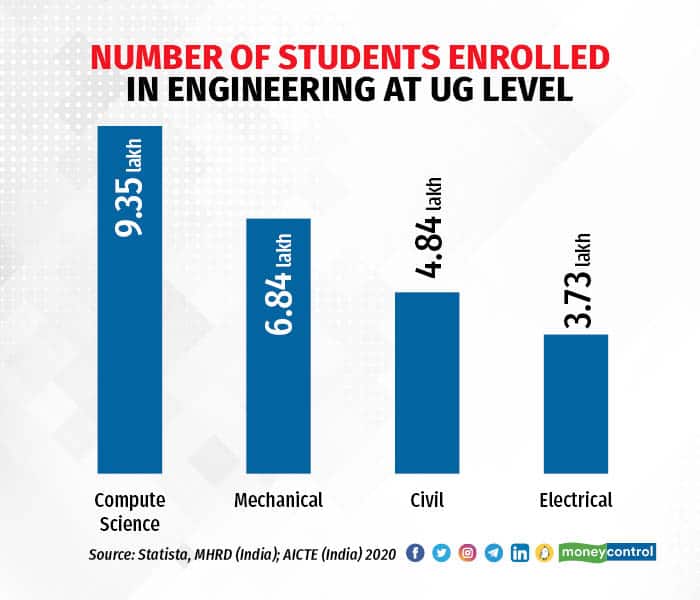 “Apart from PhDs working in R&D set-ups of pharma, chemical engineers working in the oil and gas segment are among the highest-paid engineers, in part given the harsh working conditions for them,” says Jang Bahadur Singh, director of Human Capital Solutions at Aon in India. Should salary be a factor in deciding your stream?

Experts suggest that would-be engineers should focus on their area of interest areas rather than starting compensation because, in the long run, there isn’t much of a difference in remuneration.

As engineers in different streams go up the ladder. salaries start to converge with only a marginal difference in salaries. So, Singh says the near future will be rosy for engineers respective of the stream.

“The need for software engineers is well chronicled but as demand picks up in rural India and with an aggressive push by the government to prop up manufacturing in the country, engineers will be in a pole position to ride on this growth journey and see fast-moving careers,” he added.

Garisa of Monster India recommends that engineering aspirants think of their passion and career aspiration and where they would like to see themselves 5-10 years after earning their degree.

“If a student aims to learn and explore any specific subject, obtaining a core engineering degree is certainly the way,” Garisa said.

The relevant work experience helps engineers in their pursuit of specialisation by opting for a Master's or even a PhD, which eventually is very likely to fetch a handsome compensation, he added.

ALSO READ | How to find this thing called work purpose? Has anyone got its mail ID?

All engineering graduates are taught analytical thinking, logic building and process development that are the skills most sought by IT companies hiring fresh graduates, Garisa said.

“Therefore, most IT companies hire freshers from all engineering domains and provide them the job-specific training to be qualified enough to work in the IT industry,” he said.