With electric cars still being priced at Rs 8.5 lakh and above, new-age startups are sensing an opportunity in the Rs 5-to-8 lakh passenger vehicle segment, in which all available models are petrol-fuelled

With the electric cars still being priced at Rs 8.5 lakh and above, new-age startups are sensing an opportunity in the Rs 5-to-8 lakh passenger vehicle segment, in which all available models are petrol-fuelled.

Companies such as Gensol Engineering, Personal Mobility Vehicle (PMV) Electric and Omega Seiki Mobility (OSM), etc., are working on models to take on petrol-driven hatchbacks in that price range. 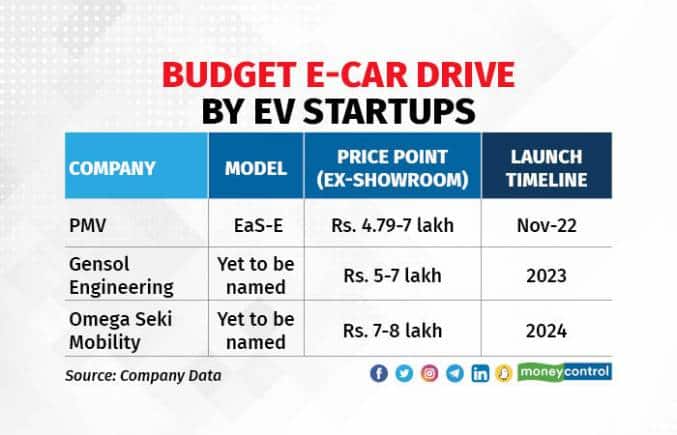 For instance, PMV electric has unveiled its first flagship 2-seat microcar EaS-E and received over 6,000 pre-bookings from domestic and international customers.

The company claimed that it has created a new category of personal mobility vehicles (PMVs) in the fast-expanding electric vehicle (EV) space with the unveiling of EaS-E, priced at Rs 4.79 lakh for the base model for the first 10,000 customers.

PMV Electric founder Kalpit Patel said: “We anticipate the market size for purpose-built vehicles to be close to 50,000 vehicles annually.”

Cheapest vs. most expensive

At present, there are close to 25 electric car models on sale in India, out of which PMV EaS- E is the cheapest EV (mentioned below) while the Mercedes-Benz EQS is the most expensive electric car in India (Rs 1.55 crore to Rs 2.45 crore).

According tor TechSci Research, Mahindra eKUV100 and Renault Kwid EV are the e-cars priced below Rs 8 lakh and will be available in India.

Moneycontrol couldn’t confirm from Renault and Mahindra about their upcoming products before the publication of this article.

Omega Seiki Mobility (OSM), a homegrown electric vehicle manufacturer that has introduced its own line of commercial EVs, is also gearing up to get into the affordable electric passenger vehicle segment in a year’s time.

“We do not just intend to disrupt the domestic commercial vehicle market, but also the passenger vehicle market.  Though details of the product are confidential, what I can tell you is that the price point will be between Rs 7 to 8 lakh and it will be more like (a vehicle ) for four people (and) will have a range of about 200km,” revealed Uday Narang, founder and Chairman, OSM.

Moneycontrol had earlier reported that Gensol Engineering Ltd, an Ahmedabad-based solar company, is aiming to make an electric car for the masses in the range of Rs 5 to 6 lakh. Positioned against WagonR and other petrol-driven hatchbacks, the unnamed e-car will have a maximum range of up to 200 km, a speed of 95+ km per hour and charging time of three hours.

Anmol Singh Jaggi, managing Director, Gensol Engineering, told Moneycontrol that it  commenced pre-production trials a month back and its Pune facility was also going on stream.

“Next year, we will unveil the car in February and will then start taking bookings in March followed by deliveries in April. We are only selling a single variant and aim to sell 1,200 cars a month in the first phase from Delhi, NCR, Bangalore and Mumbai.”

Until EaS-E’s launch last week, Tata Motors claimed to have launched the most affordable electric car by introducing the electric variant of Tiago (at Rs 8.5 lakh onwards).

A day after the launch, the company announced that it had received 10,000 bookings for the model.

According to the Federation of Auto Dealers Association (FADA), the cumulative sales of e-cars in the first six months of FY2023 were 18,142 units, a 268% year-on-year increase. Tata Motors commanded 85.53% share of the market by retailing 15,518 units.

Puneet Gupta, director of S&P Global Mobility, believes that global passenger mobility at an affordable price for the masses will be very challenging.

He said: "These emerging players need to give a value proposition to the customers and the products should be reliable and safer. These are the two parameters where the success of these players will depend. For example, if there are fire issues and the cars are not safe, people will lose confidence in these products.”

Premium play by some EV makers

While there are affordable e-hatchbacks launched by some players, there are some EV startups that are aggressively venturing into the premium segment.

For instance, Ola Electric is gearing up to launch its maiden electric car by 2024. The Bangalore-based EV startup has claimed that the upcoming vehicle will have a range of more than 500 km on a single charge.

Similarly, another Bengaluru-based EV startup, Pravaig Dynamics, is set to unveil its maiden SUV in the country tomorrow (November 25).

To be called Defy (according to the teaser ad), the e-SUV is anticipated to cost Rs 35 lakh.  The company claims that its first SUV will offer a range of 504 km on a single full charge, along with a top speed of 200 km/h.  The company’s founders were unavailable for comment until the time of publication of this article.
Avishek Banerjee
Tags: #Electric Vehicle #EV in India #Gensol Engineering #Omega Seiki Mobility #Personal Mobility Vehicle #Prayag Dynamics
first published: Nov 24, 2022 04:47 pm