With a 100% rally, what is driving Tesla stock?

Speculation and investors valuing the company on its future potential are two big reasons for rally, say experts.

Shares of electric carmaker Tesla surged 11 percent in the after-hours trading following the company's earnings report on April 29. This was on top of the 4 percent gain it recorded during the day. 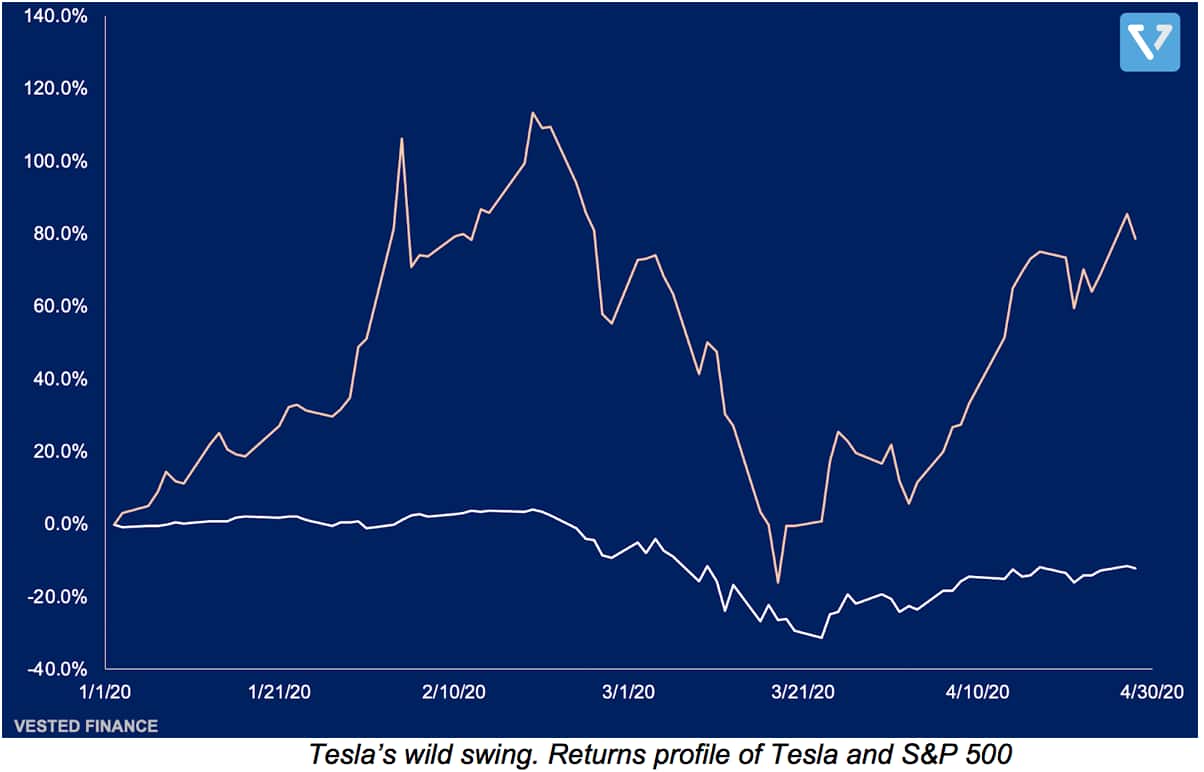 This is despite factory closures in the wake of the coronavirus outbreak that forced the company to cut wages and furlough hundreds of hourly workers.

What has put the stock in the fast lane? Let's take a look.

"When share price swings +/- 100 percent within the span of three months, there can only be one answer- speculation," Darwin Arifin, COO and Co-Founder at Vested Finance, told Moneycontrol.

According to him, wild swings in the scrip goes back to the bears vs the bulls debate. He said bears usually take charge of the stock if there is any news which indicates that Tesla will not be able to meet its targets, as witnessed from the 60 percent crash between February 19-March 18.

On the other hand, its cutting edge technology and ability to out-innovate its competition give enough impetus to the bulls to drive the stock higher.

Another reason for the rally is that investors are valuing the company based on its future potential, he said.

"Clearly, investors are evaluating Tesla based on its future potential. Since its founding, Tesla has been at the centre of the transportation revolution: (1) transition from internal combustion engines to electric motors, and (2) self-driving revolution through its autopilot," said Arifin.

Comparing the enterprise value (EV) to sales reveals that Tesla is valued much higher than other carmakers. "Tesla’s EV/sales ratio is about 5X that of BMW," said Arifin.

According to him, investors are looking at Tesla as a tech company rather than an automaker. 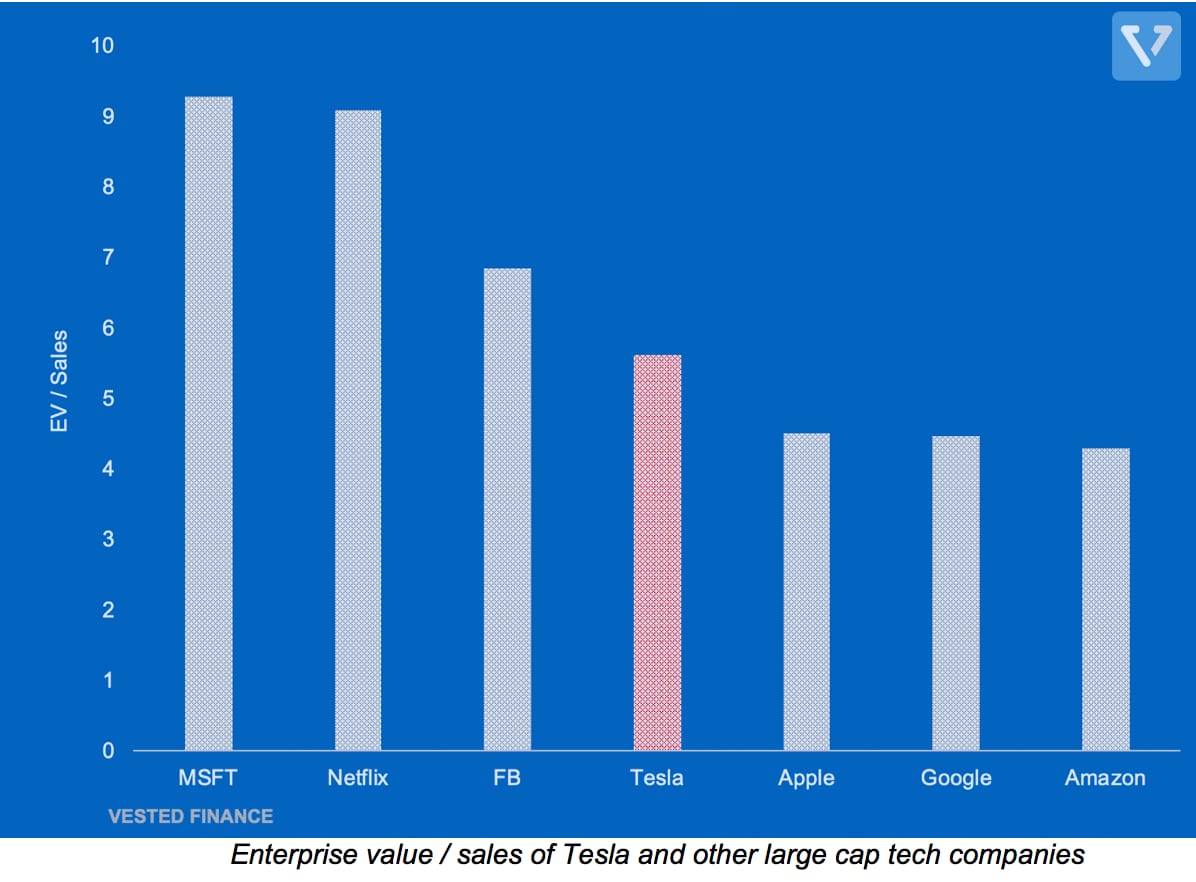 "Unlike other aforementioned tech companies (except Apple), Tesla produces real-world physical products and is constrained by manufacturing and supply-chain limitations (as opposed to a zero marginal cost software services)," he said. "Its operations are subject to global lockdowns, disruption of supply chains and change in consumer spending in times of recession, considering Tesla sells relatively high priced cars."

Telsa managed to beat analyst's expectations in its first-quarter earnings on April 29. Its adjusted earnings per share was $1.24, crushing analysts' average forecast for a loss per share of $0.28.

Its revenue grew 32 percent year-on-year to $5.99 billion, fueled by tax credits sold to its competitors.

Two things investors must watch out for are Tesla's car deliveries and cash flow, Arifin said.

"Car deliveries is important because it is a leading indicator of revenue. Also, cash flow because if Tesla runs out of cash, it cannot produce cars, build inventories and deliver products," he said.

In Q1 2020, the car deliveries and cash flow were significantly down compared to the previous year.

The total car delivers fell 37 percent year-on-year, primarily driven by lockdowns in March. However, the company said the sales were strong during the first two months of the quarter.

Going forward, the deliveries may remain suppressed in Q2 2020 due to continued lockdown in the US and Europe.

Mounting inventories and falling revenue severely impacted the cash flow to the tune of $981 million in the January-March quarter.

Furthermore, continued investments in Fremont (California) and Shanghai (China) required more capital expenditures. Nonetheless, the company expects to weather the storm as it has $8.1 billion in cash, thanks to its recent $2.3 billion fundraising.

Tesla's Fremont factory in California is shut until the end of May. The company, however, completed its Shanghai Gigafactory in record time in 2019, which helped sustain production.

"During the lockdown in China, Tesla enjoyed a special relationship with the government that led to minimal disruptions to its operations," Arifin noted.

Following the lockdown in China, Tesla only closed its Shanghai factory and that, too, for two weeks.

When the factory reopened, the local municipal body helped Tesla to smoothly transition to full capacity by installing infrared cameras to detect fevers, offered to house workers and even made arrangements to prevent supply-chain disruptions.

However, the ability to meet its production targets does not necessarily translate to the sale of cars.

"During recessions, consumers reduce large spending, which typically hits car manufacturers hard. After the 2008 sub-prime crisis, the number of cars sold in the US decreased by 40 percent and took 4 years to recover to the previous level," Arifin said. Arifin believes Tesla has proved the sceptics wrong when it comes to operations but with a pandemic that can potentially push the global economy to a Great Depression-like recession, one must remain cautious when investing in Tesla.

"Whether you are a Tesla bull or bear, the company has proven its sceptics wrong time and time again but with a once in a 100 years global pandemic induced recession upon us, Elon might have met his match," he said, referring to Tesla's maverick boss Elon Musk.

Disclaimer: The views and investment tips expressed by experts on Moneycontrol.com are their own and not those of the website or its management. Moneycontrol.com advises users to check with certified experts before taking any investment decisions.
Suyash Maheshwari
Tags: #Business #markets #Telsa #world
first published: Apr 30, 2020 02:17 pm