Nurturing original ideas at the workplace: The importance of brainwriting and refining

Brainstorming after brainwriting might have some benefits and some downsides. We asked psychologists and HR professionals to share their thoughts on the best ways to encourage ideation and ensure that the best ideas don't get lost in the noise.

Brainwriting may help employees nurture, assess and thus come up with better ideas. But it can be challenging for junior employees. (Representational image: Jon Tyson via Unsplash)

A LinkedIn post by Wharton Professor Adam Grant, where he wrote about the demerits of brainstorming, left social media divided. Grant argued that as opposed to brainstorming sessions or a team discussion, workplaces should urge their employees to do ‘brainwriting’. Grant said that a lot of employees ‘bite their tongues’ due to conformity pressure, and brainwriting helps employees generate ideas separately. 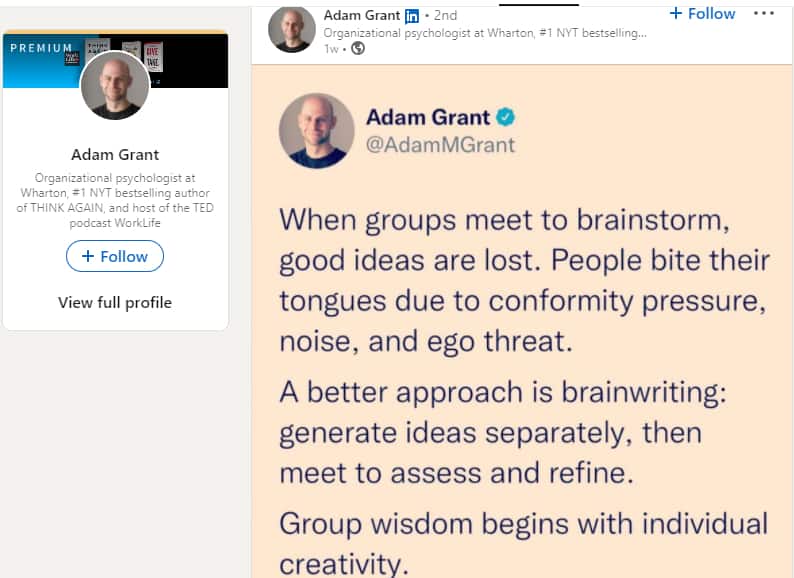 Brainwriting is when employees instead of speaking their ideas, jot them down on a piece of paper anonymously. These papers are then collected by a moderator who then reads the ideas out loud and the employees come to a consensus. The top comment on Grant’s post argued that when people form ideas on their own, they tend to ‘hang on to them and defend them’. This, as a result, ignited a contentious debate over which is a better technique - brainwriting or brainstorming?

Dr Jini K. Gopinath, chief psychology officer, YourDOST, says: “The advantage of brainwriting is that there are no power dynamics. Individuals who are introverts and struggle with sharing their thoughts publicly can come up with these ideas without being judged.”

Dr Gopinath adds that group discussions are always dominated by the loud ones.

Dr Roma Kumar, co-founder and chief psychologist at Emotionally.in, echoes this. Dr Roma feels brainstorming sessions can be dysfunctional due to the ‘Uneven Communication Effect’: where the views of those who are introverted aren’t captured.

“This basically contradicts the very purpose of ideation, which is to generate maximum divergent ideas. The group should pursue all ideas possible, which doesn’t happen in brainstorming,” Dr Roma says.

Dr Gopinath says that while brainwriting does help employees nurture, assess and thus come up with better ideas, it alone cannot be used to reach a single idea that the entire group agrees on. “Once all ideas are generated, we need to reach a consensus and get the group to agree on an idea. This is called the funneling process. For funneling, we need to brainstorm ideas so employees can agree on a single idea that suits the business needs,” he says. Dr Gopinath therefore recommends a healthy mix of brainwriting and brainstorming when it comes to generating workplace ideas.

Dr Aditi Banerjee, director, HR of ad tech company Zelto (previously AdPushup Inc.), says that brainwriting stimulates our brain to go back into the ‘academic stage’ - similar to when we wrote exams in schools. “In exams, we were expected to put our best responses on paper and score the highest marks. Brainwriting is similar to this.”

Dr Gopinath feels that brainwriting might work well for experienced and senior team members but not for the budding employees - the freshers and interns. “A budding team may not always be aligned with the goals and metrics of the business since they are still at their learning stage. An experienced team will not face that problem and easily reach a consensus which aligns with business needs.” he says.

HR director at Kaspersky Anastasia Shamgunova says brainwriting is an inclusive process, and helps generate a diverse set of ideas. “It is inclusive because it allows for equal participation and sharing of ideas from all participants. Since participants can anonymously submit their thoughts, brainwriting fosters creativity and lowers anxiety. People tend to be less apprehensive about sharing unconventional solutions because no one's name is associated with them,” she adds. “Additionally, there is less social anxiety about losing face in front of one's peers or supervisor when nobody has to compete for attention.”

Dr Gopinath also feels that brainwriting inculcates a sense of self-awareness and responsibility in employees. “In brainwriting, employees build up their ideas backed by research rather than giving in to conformity bias which may happen in brainstorming. This enables teammates to be more in control of their ideas and stay confident with their responses backed by research done individually,” he says.

The experts we spoke to all agreed that anonymity - that is, keeping the identities of the responders anonymous - is key to brainwriting. “Anonymity equalizes the value of everybody's input regardless of position, status or power. It also gives people the confidence to express ideas that are different and go against the realm of acceptability. It fosters meritocracy,” says Dr Roma.

With the onset of the Covid pandemic and the subsequent lockdown, many employees started working from home. Office desks and whiteboards were replaced by Zoom calls. One cannot help but wonder if brainwriting would work just as well in a remote set up.

“It wouldn’t,” says Kaspersky's Shamgunova. “In a remote setup, a brainwriting session will not only take more time but it may also be harder to keep everything anonymous and prevent people from getting the same worksheet more than once,” she says. Shamgunova feels that the role of the moderator becomes more important in a remote setting. “He must give clear instructions and help everyone stay on track,” she adds.

Dr Gopinath, on the other hand, feels that the agenda of brainwriting remains the same irrespective of the set-up. “As long as the anonymity is intact - the process can be integrated virtually. I feel the current generation - the Gen Z - might resonate more with brainwriting,” he concludes.
Deepansh Duggal is a freelance writer. Views expressed are personal.
Tags: #Adam Grant #brainstorming #Office culture
first published: Sep 10, 2022 08:21 am