Curtain Raiser | SH Raza centenary: Paris to host a retrospective on the artist from Mandla

India and France to pay tribute to the modernist master Sayed Haider Raza on the late artist's birth centenary with the largest-ever exhibition of his works at the Pompidou Centre in Paris in 2023.

Sayed Haider Raza lived in France for 60 years, but never gave up his Indian citizenship. He kept his Indian passport, visiting and writing to his friends and fellow artists in his home country and helping younger practitioners of art for decades. He returned to India a decade ago and continued his support for younger artists until his death in 2016. 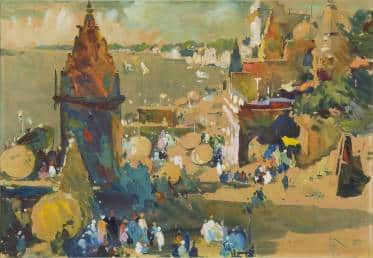 Six years after he passed away in his Delhi home, Raza will be celebrated in the largest-ever exhibition of his works on the centenary of his birth. The Raza retrospective, which will be held at the Pompidou Centre in Paris from February 15 to May 15 next year, will have 98 works lent by art institutions and private collectors from India and Europe.

The exhibition will span more than half-a-century of his career from his days as a founder of the Progressive Artists' Group along with MF Husain, VS Gaitonde, Tyeb Mehta, Akbar Padamsee, Krishen Khanna, Ram Kumar and FN Souza in the '40s to his works as a painter living in Paris where he arrived in 1950 as a young art student on a scholarship. As much as 60 per cent of the works in the exhibition comes from India with the rest from galleries and collectors in France, the UK, Switzerland and Norway.

"The works at the Pompidou Centre exhibition include a large number of paintings that have never been included in a public exhibition before," says poet Ashok Vajpeyi, the managing trustee of the Raza Foundation set up in 2001 by the artist to promote arts, culture and ideas in India. "The exhibition is historic. It will be the largest-ever exhibition Raza has ever had," adds Vajpeyi, a long-time friend of the artist. 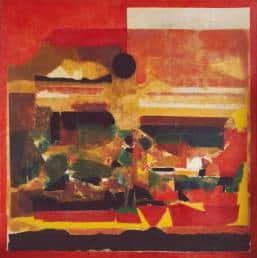 Among the galleries in India that have lent their collections of Raza's works are the Piramal Museum of Art, Kiran Nadar Museum of Art, JJ School of Art, Mumbai, and Jehangir Nicholson Art Foundation, Mumbai. Art institutions and private collectors from Europe include the Jane and Kito de Boer Collection, Holyrood Holdings Limited and Amrita Jhaveri, all based in London.

"The exhibition is the first retrospective of Sayed Haider Raza in France," said Pompidou Centre's new president, Laurent Le Bon, in a video message at a curtain-raiser to the Raza exhibition in Paris held on November 23 at the residence of French Ambassador Emmanuel Lenain in the presence of artists from both India and France. 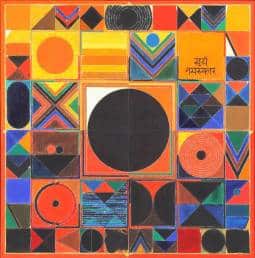 "SH Raza is a source of inspiration for what an artist can do," said Ambassador Lenain referring to the artist's arrival in Paris on a scholarship and rising to the pinnacle of creativity. "We are going to give more scholarships to young Indian students like what Raza received," he added.

Supported by the Raza Foundation, the embassies of France and India in New Delhi and Paris, art institutions and individual collectors, the exhibition was earlier scheduled to be held last year until it was postponed due to the coronavirus pandemic. The Pompidou Centre exhibition was part of a joint communique between India and France issued during the visit of Prime Minister Narendra Modi to France in August 2019 to promote cultural exchange.

Born on February 22, 1922 in one of the nine huts in a tribal forest village in Mandla, Madhya Pradesh, Raza symbolises the Indian dream of rising from humble origins. He studied in a government school located on the fringes of the Kanha National Park before going to Nagpur to learn drawing and earning a scholarship to the prestigious JJ School of Art in Mumbai. The bindu, the leitmotif in Raza's works, was introduced to the young school student by his village school headmaster.

Raza left for Paris in 1950 on a scholarship for higher studies in art, going on to make France his home for the next six decades. As a member of the Progressive Artists Group in the then Bombay, he became part of the modernist movement built on plurality. A landscape artist in the early part of his long career, Raza helped evolve an alternative modernism resting on tranquility instead of disruption. His cityscapes were devoid of human presence. 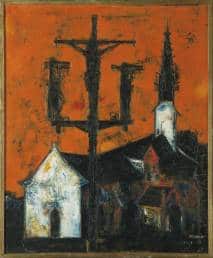 "The exhibition is significant because Raza was a man who lived in France for 60 years but remained deeply rooted in India," says Vajpeyi. "His metaphysical concepts of art come from both Hinduism and Buddhism. He is the only modernist in the world who used verses from the Vedas and Upanishads and the poems of Kabir Das, Mirza Ghalib and Faiz Ahmad Faiz in over 100 paintings," he adds, "No other painter that I know had poetry inscribed in the canvas itself. All the poetry was written in Devanagari and 400 of his works have Hindi titles."

The birth centenary of Raza has already witnessed multi-city exhibitions of the artist's authorised prints, exhibitions of young tribal artists, book releases and seminars in India. More events will mark the Pompidou Centre show, including a conversation on Raza by artist Atul Dodiya and critical theorist Homi Bhabha in February next year.
Faizal Khan is an independent journalist who writes on art.
first published: Nov 25, 2022 04:08 pm

You are already Moneycontrol Pro User.