Workplaces are missing out on a vast amount of competence and thought innovation by not hiring talent aged 45 and above. These seasoned professionals have firefighting skills as well as connections.

More experienced workers are better suited for some roles, but older workers, too, should not worry much about who they report to. (Representational image: LinkedIn Sales Solutions via Unsplash)

I have been observing of late that hiring younger folks in most workplaces, and for most roles, is becoming the norm. As a 30-something-year-old, I have started to feel like a geriatric (except when I remind myself there is much of life ahead of me). Thinking deeper, I know why I feel this way; my interactions are mostly with youngsters and not so much with older people at work. While I bring in the experience, they bring in the ‘hustle’ and we live happily together.

But my case is the exception. Workplaces today are missing out on a vast amount of competence and thought innovation by not hiring seasoned professionals above 45 or 50 years of age. While this is the norm at most startups (in the early stages, to be more specific), it also holds true for many other industries. The only workplaces in which I now see people aged 50+ (that, too, sparingly) are banks, schools, IT/ITeS companies and manufacturing facilities.

For context, there will be 239.4 million Indians over the age of 60 in 2041 against 104.2 million in 2011. Meanwhile, the number of Indians aged 0-19 years has already started to decline and the proportion of the population in this age group is projected to fall to 25 percent by 2041 from 41 percent in 2011. While we currently are in the golden age of the demographic dividend, it is only expected to last another 15 years or so.

Hence, integrating ‘experience capital’ in companies today is very important so as to start planning for a time when most of India's population is no longer young. 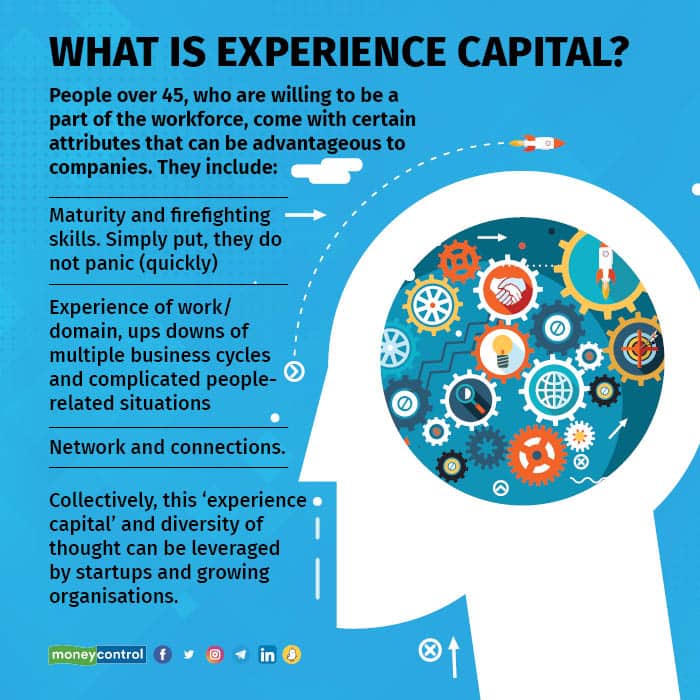 So, why don't we see many grey-haired folks in offices today? Well, perhaps because many older people look younger these days, for starters! And because companies are not hiring older candidates due to fat pay packages. While these may appear to be obvious reasons, however, the nuances are slightly hidden, and deeper.

As pointed out by Vaitheeswaran K., co-founder, Again Drinks and Indiaplaza (India’s first e-commerce company), an important cultural reason is that in Asia, age is directly translated to wisdom and hence associated with more respect and higher designations. Filial piety, or “respect for one’s elders”, is often an assumed common value among Asian cultures. Be it China, Japan, Korea or India, caregiving responsibilities of elders are passed on to their children and grandchildren.

But this is not the case in the West; in the United States, for example. There, elders look after themselves and are provided State aid in case they are unable to do so. That is perhaps why many veterans take up junior positions and start their careers from scratch at 65 or beyond. Every time I think about this, I am reminded of the American movie The Intern, where a 70-year-old widower starts afresh and bags the role of a ‘senior intern’ at a fashion house. One cannot imagine this happening in India (yet).

Did you know: Companies do not ask for the date of birth of potential candidates in the United States. The Age Discrimination in Employment Act of 1967 prohibits them from doing so.

“The construct of our society doesn't permit veterans to take up entry-level roles. Further, if they do, societal stigma catches up and there might be murmurs about their children deserting them,” says Dr Varsha Sreevatsa, co-author, Apples & Oranges (a book offering practical approaches to incorporate D&I [diversity and inclusion] initiatives in organisations), and founder, LetsDRIVE, who is a proponent of cognitive diversity and total inclusion. “However, that will change. Going forward, we will have fewer pensioners and more people will have to work in multiple sprints.”

Referring to the book The 100-year life by Lynda Gratton and Andrew Scott, Sreevatsa adds that with life expectancy increasing, people are now planning and designing longer-term careers, and that will mean seeing more veterans taking guard for a second or third innings.

Having said that, there are some on ground realities that skew the average age in offices today.

According to Vikas Dua, head of HR at IPG DXTRA, a leading marketing communications company, the pandemic may have accentuated the hiring of younger candidates across roles. Reason: the higher degree of automation in the workplace and the need to keep costs under control. Many companies have done away with CXO roles (that require a work experience of 20+ years) and replaced them with Manager or Senior Manager level roles (that require a work experience of 10-15 years at the most). This is making it tough for older employees to either switch jobs easily or to get back to the workforce.

“The situation on the ground is worrisome as many people still do not have a retirement nest at the age of 45,” says Dua. Some of the trends he has noticed are older employees taking up more consulting, coaching and freelance gigs or staying put in their current roles and jobs. He believes meeting mid-way is a good solution for both companies and older employees, where companies are flexible about age and older employees about titles and compensation.

Lastly, we may also be victims of the past. For decades, grey-haired folks dominated the workplace and hierarchy was the norm. Younger talent was not given its due and in many places, even today, a young employee is not given enough space to voice his or her thoughts. Says Sandhya Menon, a communications professional, “Today, the reverse is true; younger workers have found a voice and are questioning why they should respect older colleagues.” The fact that older colleagues are role models and can teach by demonstrating resilience is lost on many workplaces.

The need to meet mid-way

A middle path means the best of both worlds and here are some ways that can happen.

Normalising reporting based on proficiency and not age: Per Vaitheeshwaran, each function/ department requires a unique hiring approach. “Getting an older person to report to a youngster is a skill and also getting them to do their work is a skill,” he says. In startups especially, there is an action bias, for which younger professionals are preferred. However, there are some expertise- and experience-driven roles for which only senior talent is preferred. Hiring managers must know the difference and strike a balance.

As a corollary to the above point, older workers should not worry much about who they report to and need to be thorough professionals, putting their skills to the most advantageous use.

Overcoming homophily and being more inclusive : Rajeev Menon, co-author, Apples & Oranges, and a Diversity and Inclusion proponent, talks about the psychological concept of ‘Homophily’ — the tendency for people to seek out or be attracted to those who are similar to themselves. This often leads to a bias in hiring. Instead, he says, organisations should focus more on being inclusive. “We are always more comfortable with our own kind and culturally that has to change,” says Menon. In India, the concept of diversity and inclusion is restricted to diversity only. To be truly inclusive is to empower and hire for diverse thinking, not just tokenism. He further suggests that workplaces have to make some behavioural changes. For example, by letting everyone in a meeting speak, keeping track of who is giving ideas and which ones are executed. Changing meeting convenors, and by rewarding thought, not just action.

Creating more ‘reverse mentoring’ opportunities: Sreevatsa recommends hosting listening sessions and pairing younger and older workers. They should be able to freely exchange ideas and also be codependent at work. Further, being a ‘don't knower’ is key to creating a more transparent work culture. Many older workers, if given the opportunity, are excited and more than willing to train and impart their skills to younger workers. Organisations should encourage this.

For example, a younger employee recently revealed how being paired with an industry veteran on a project helped him gain tremendous expertise and industry knowhow. Late-stage startups especially are now hiring experienced subject-matter experts; pairing them with younger team members will be beneficial to both.

Measuring more than ‘productivity’: Companies should not use the same yardstick of measurement for a 40-something and a 20-something. Assessments should be more skill- and outcome-based and not productivity- and output-based. Not every attribute can be quantified, but older workers do bring in more thought diversity that should be encouraged.

The fact that we are interdependent and need a mix of people at the workplace is well known. Going forward, here is hoping age is just a number and each person is given the runway to live and give their professional best — be it at 20 or 60.
Nisha Ramchandani leads content and community at Plum and writes on the Future of Work.
Tags: #ageism #human resources #Office culture #talent
first published: Oct 1, 2022 08:52 am