Why Kashmir's walnut industry is on the back foot

Srinagar, September 16: It is Harud (autumn) in Kashmir; walnut-harvesting season. Growers pluck the dry fruit every year in mid-September and send the crop to the markets.

Globally, India stands eighth in terms of walnut production. And within India, Jammu and Kashmir (J&K) is the major walnut-producer with annual output of around 2.66 lakh metric tonnes grown on 89,000 hectares; J&K accounts for more than 98 percent of the total walnut production in India. Three varieties of walnuts are grown in Kashmiri: the Kagzi is a large nut with thin shell, the Burzul is a medium-sized nut, and the Wonth is hard and mainly used to extract oil. (Photo by Irfan Amin Malik)

Locally known as “Doen”, Kashmiri walnuts are organic (a USP of the nuts) as no sprays and fertilisers are used in their cultivation.

Traditionally, Kashmiri walnuts have enjoyed good demand in both domestic and international markets. Yet ever since walnuts from California, Chile and China have entered the Indian market, Kashmir’s walnut industry has suffered a set back.

Though the government has levied import duty of 132 percent on walnuts from the US and 110 percent for shipments from Chile, the imports haven't stopped and continue to hit Kashmir's walnut industry. 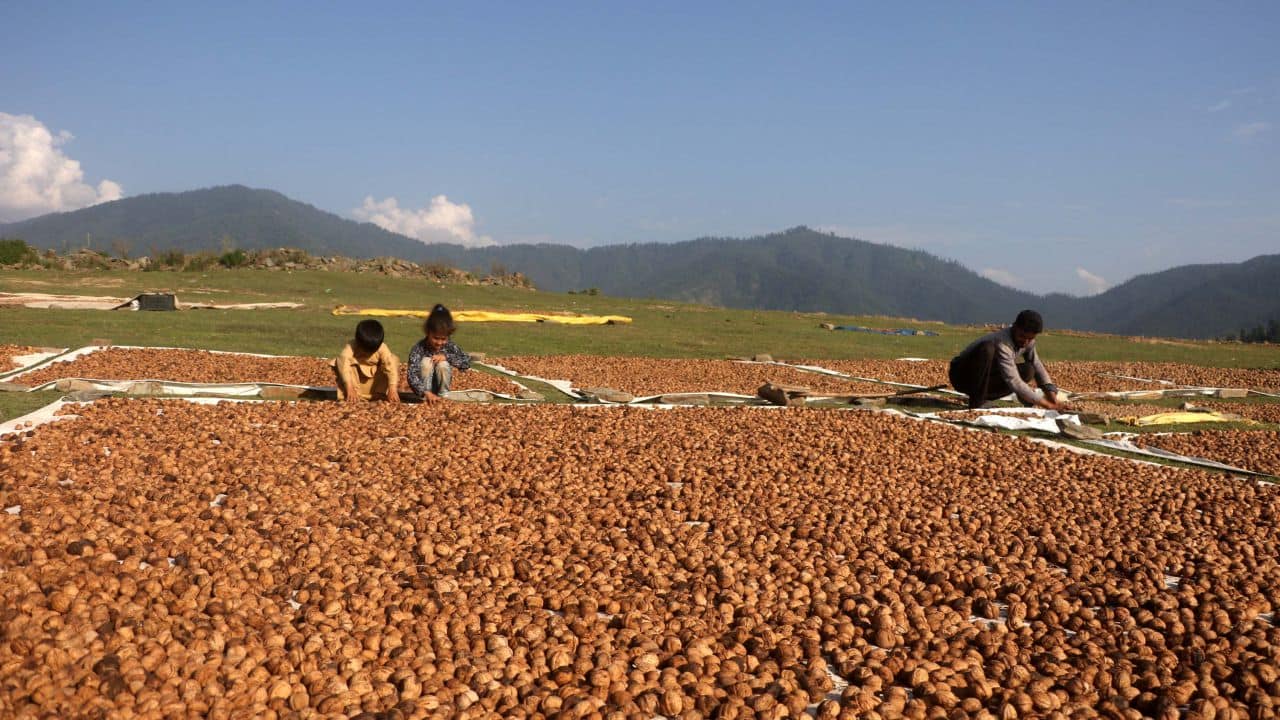 Indian traders is swiftly losing out in major export destinations like France, Netherlands, UK, Germany, and the UAE.

Industry insiders say that the absence of export-oriented strategies is one reason why exports aren't growing at a comfortable rate. The Goods and Services Tax (GST) announced by the Union government also spelled problems for Kashmir’s walnut growers. In July 2017, walnuts were first put under the 12 percent tax slab but later added to the 5 percent bracket after a show of strong resentment by growers. A walnut tree can take up to 15 years to give good yield. (Photo by Irfan Amin Malik)

Ajaz Hakim, a 34-year-old MBA from Srinagar, said trade volumes might have been higher if the Central government had not imposed trade barriers (both tariff and non-tariff). “Besides official apathy, the lack of adequate infrastructure in the production areas, long gestation periods, poor orchard management, and uneven yields have limited the walnut production in Kashmir," said Hakim, who ran a walnut-processing unit for three years before closing it down in 2018.

"The walnut-processing unit holders do not get quality crop, and the growers also do not get good rates in the dry fruit markets across the country,” added Hakim.

A typical walnut tree in Kashmir takes 13-15 years to fetch the first crop, Hakim explained. The long gestation is an impediment to the growth of walnut producers in the region. “We really need to bring more areas under walnut cultivation with high yielding varieties. Sick orchards need to be rejuvenated. The need of the hour is to encourage fresh walnut plantation, on the pattern of the apple plantation. Farmers must be provided good quality grafted plants. We do not have orchards for specific varieties of walnuts. We have uneven yield for the crop and our produce is of variable size and quality due to which it is not competitive in the market.” Orchards for specific varieties and consistent size and quality of the nuts could help to make Kashmiri walnuts more competitive in the market, industry insiders say. (Photo: Irfan Amin Malik)

In July 2010, Javed Hussain Kumar completed his MBA in marketing from Pune University and established his own walnut-processing unit in Lassipora, Pulwama, in south Kashmir, 45 kilometers from Srinagar city.

Kumar has 11th walnut-processing unit in Lassipora estate but currently he is the lone survivor among all 11 unit holders. “My unit is also under stress but I am somehow managing to keep my feet on earth. For example, in the year 2019, when Union government revoked Article 370 and the whole region remained under clampdown, I suffered Rs15 lakh loss and I was forced to sell walnuts stock at paltry rates.”

He added that till 2010, the biggest importer of Kashmiri walnuts was China, but over the past eight years, China has managed to produce the crop, and globally it alone contributes 51% of the total walnut production in the world. “Kashmir was once the second-largest walnut producer of the world, and currently, it is not even falling among the top ten countries of the world,” said Kumar. The people associated with the walnut industry in Kashmir say they are facing a wide range of issues, from the planting of trees to the marketing of this product.

This year again the growers have little to smile as the crop continues to lose market share and production has been slowing sharply. Growers said that dry fruit production and trade is an unorganized sector in J&K, and the grower still faces exploitation by middlemen.

Younis Ahmad Bhat, a 29-year-old walnut grower in south Kashmir’s Pulwama village, blamed the absence of local dry fruit mandis in Kashmir for some of the problems. “There is a lack of infrastructure like transport, power supply, roads, mandis, and packaging and processing facilities. Every year, the crop production depletes and then a grower is forced to carry the crop to Jammu. After spending labour charges during pre and post harvesting and transport charges, the rates we get from dealers in Jammu are pretty low,” he added. 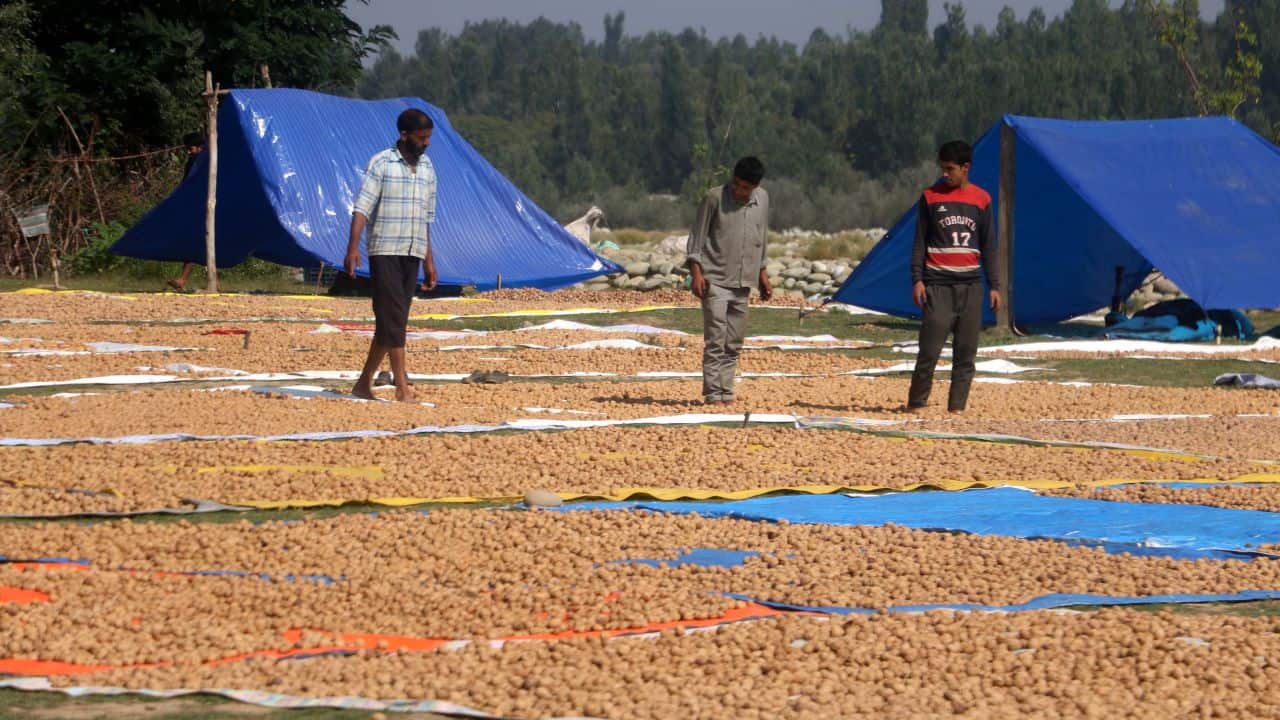 Over 7 lakh families depend - directly or indirectly - on the walnut trade in Kashmir. (Photo: Irfan Amin Malik)

Bhat’s neighbour Sartaj Ahmad Sheikh asked who would want to do walnut farming when the market is choking and rates are falling every year? “The dealers in Jammu dry fruit mandi are playing with our business. They do not give us good rates, and every time we return helpless and disappointed. If the government will not fix the adequate rates of walnuts then time will come very soon when no one will cultivate the crop here,” said Sheikh.

Almost 33 lakh people depend on horticulture; 2,10,075 hectares were brought under horticulture in the Kashmir Valley in 2018–19. The total area under dry fruit cultivation is 51,576 hectares.

Horticulture is the backbone of the state economy, contributing nearly Rs5,000 crore. According to one estimate, over 7 lakh families are directly or indirectly engaged in this sector which accounts for nearly 7% of the J&K's gross domestic product. 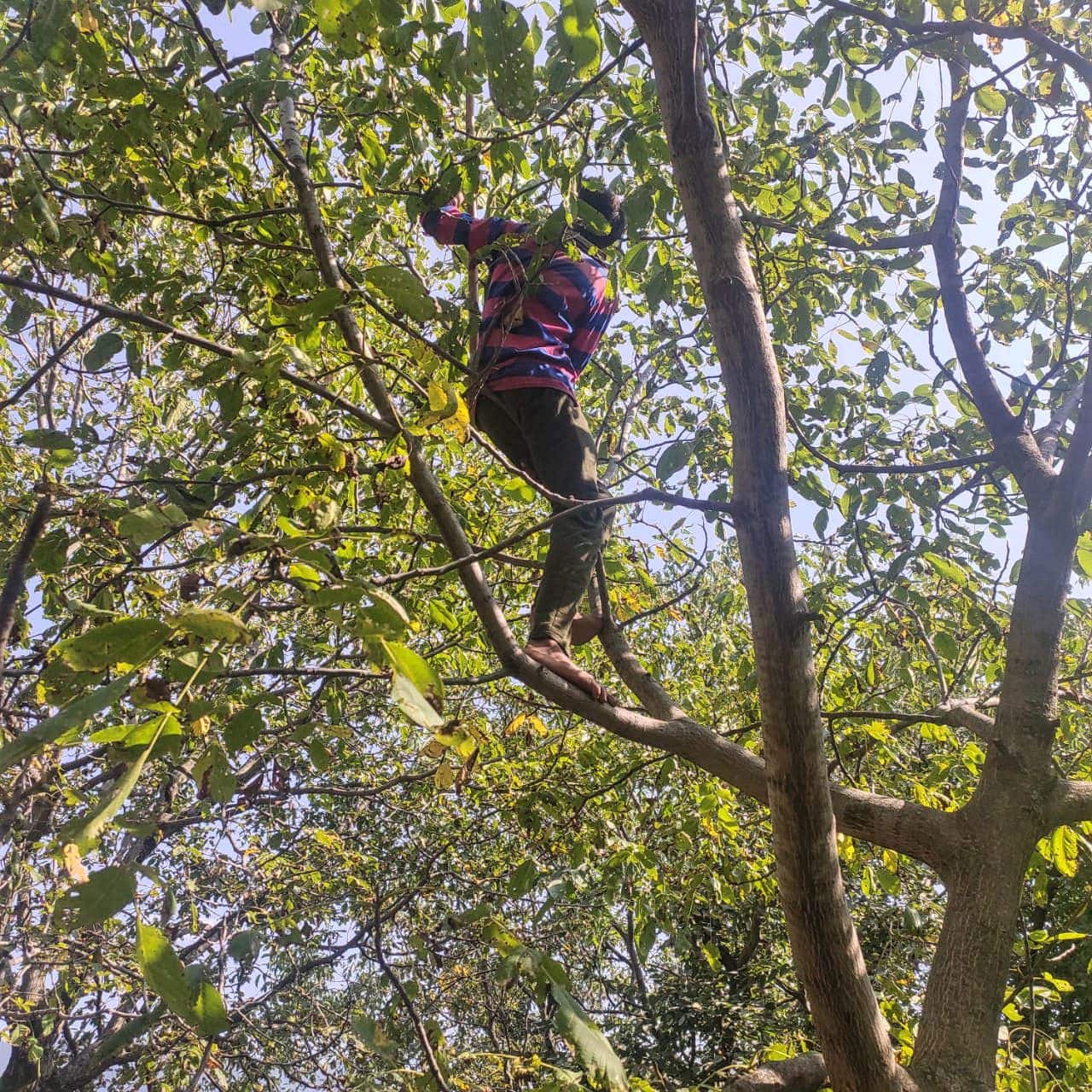 In Kashmir, walnut trees grow abundantly in Anantnag, Shopian and Kupwara. Previously, Shopian was the largest walnut-growing region in Kashmir but now Kupwara has overtaken Shopian.

There are three varieties of walnuts that grow in Kashmir. These are locally called Wonth, Kagazi, and Burzul. The Wonth is a hard nut to crack. It is mostly sold locally, and is used for its oil. The Kagzi is a larger-size walnut with a thin outer shell. The Burzul is a medium-size variety.

Dr Syed Zameer head of the department of Food Science and Technology at the Sher-e-Kashmir University of Agricultural Sciences and Technology (SKUAST), Srinagar, said the lack of mechanization is holding the Kashmiri walnuts industry back.

“The pre-harvesting and the post-harvest methods used by the farmers are primitive, resulting in reduced productivity and quality of the crop. For instance, the growers use knives and scissors to pull the husks off to reveal the shelled nuts. In terms of washing, drying, storing and transportation of the crop, our growers severely lack the infrastructure needed to increase productivity and quality at the farm and industrial level," Dr Zameer said. "For example, the primitive washing methods impact the quality of kernels badly and there is breakage, which results in wastage. The extra heat and moisture can also deplete the quality of kernels.  Postharvest management including handling, processing and packaging has to be carried out in a scientific manner,” Dr Zameer added.

Former joint director of the horticulture department Kashmir Madan Lal Sharma said that the horticulture department has a mandate to support a grower by giving him different subsidies. “We are not able to produce sufficient walnuts in the Valley, and therefore we look for imports. There is a lot to be done in walnut cultivation, like we did in apples. The growers, instead of using primitive techniques, have to use innovative farming techniques besides planting high-density walnut trees to uplift the walnut industry.” 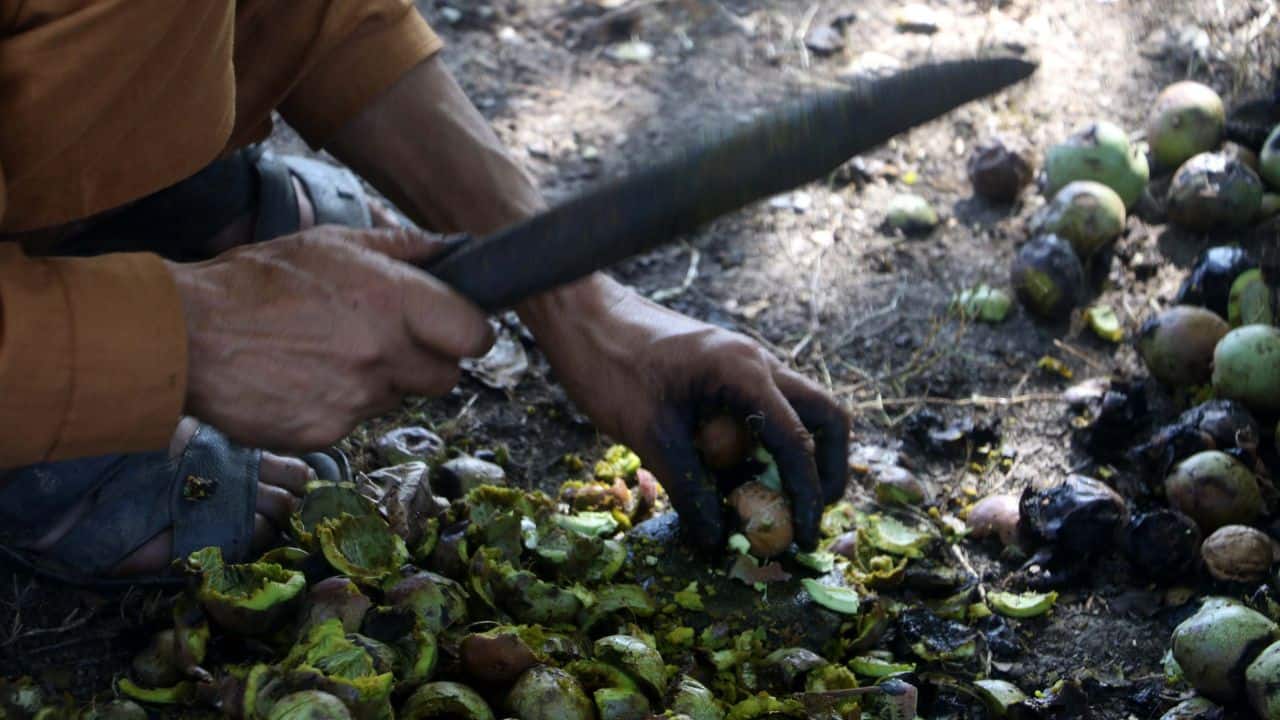 Kashmiri walnut growers use their hands and knives to pull back the husk, which can lead to breakage and wastage. (Photo: Irfan Amin Malik)