Artist Kajal Deth's works deal with the devastating loss of livelihoods during the pandemic.

In 1895, Venice opened its shores to the finest artists on the planet for the world's first biennale, a carnival of contemporary art held in the Italian city once every two years. Over a century later, it is now the turn of the 'Venice of the East' to line its own canals and the sea with galleries housing the best works of art in India.

Christened Lokame Tharavadu (Malayalam for "the world is one family"), the exhibition in Kerala's port town of Alappuzha has 267 participating artists with over 2,500 art works, making it the largest contemporary art show ever held in the country. The works mounted on the walls of erstwhile coir godowns spruced up to serve as exhibition venues reflect a wealth of established names and emerging talent in the Indian art scene. 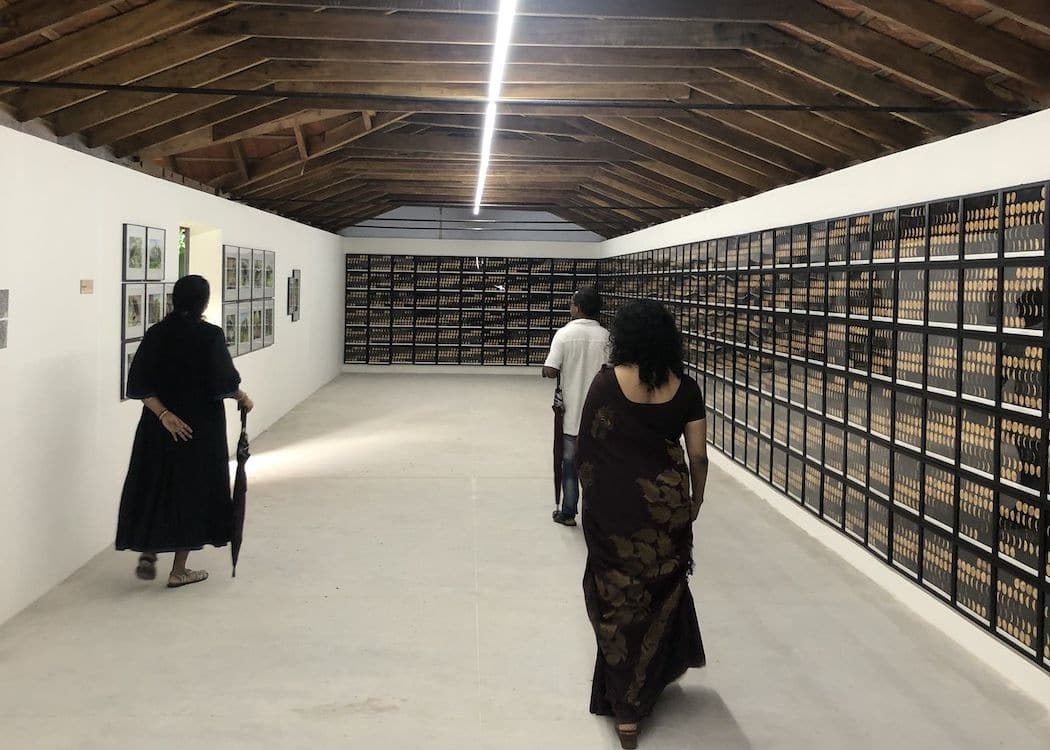 Supporting the spirit of survival

Aimed at celebrating life in a world paralyzed by the coronavirus pandemic, the exhibition underlines the significance of art to make sense of the suffering and support a struggling society's spirit of survival. "We live in darker spaces today and culture is one of the most important elements for healing human sorrow," says artist Bose Krishnamachari, who has curated the exhibition, an initiative of the Kochi Biennale Foundation (KBF).

The exhibition has brought together artists from Kerala - those living and working in the state as well as outside - in an unflinching show of solidarity with the people hit hard by the pandemic. Though the health crisis has kept audiences away from its vast venues - all representing the history and heritage of Alappuzha - since its opening in April, both KBF and the show's partners like the Muziris Heritage Project are determined to carry on. Initially planned for three months, the exhibition will remain in place to help the public visit its venues when restrictions are lifted.

Big names in the art world like A. Ramachandran, Jalaja P.S., Parvathy Nair, Jitish Kallat, K.M. Madhusudhanan and Gigi Scaria share space with those just out of art schools at the exhibition's heritage venues such as the Port Museum on the beach front, more than a century-old properties of the Kerala State Coir Corporation Limited and William Goodacre & Sons Private Limited, a major coir export house in the country.

Several artists have addressed the pandemic in their works too. Kajal Deth, an artist from the nearby Cherthala in Alappuzha district, focuses on the forlorn faces of coir workers in her neighbourhood to portray the devastating effect of the pandemic on livelihoods. "The small-time weavers are in a crisis. They don't know anything else other than weaving the yarn that they have been doing their entire life," says Deth, whose works at the show also deal with the Kerala floods of 2018.

In Bangalore-based artist Anup Mathew Thomas's work at the canal-lined New Model Society building, a mass is in progress at a church observing Covid-19 safety protocols of masked faces and social distancing. In another by Babu M.P., from Kerala's hill district of Idukki, a nurse is administering medicine to a Covid-19 patient lying on a hospital bed. Rediscovering a Famed Past

The exhibition also comes at a time when Alappuzha - once Kerala's major cultural and trade centre - has been fading in importance, unable to compete with the allure of the bigger and better-equipped Kochi. Half a century ago, Alappuzha was a bustling cultural hub that housed the state's first film studio, a radical theatre group and an abundance of folk music traditions fostered by the region's farm workers.

Along its long-winding canals, scores of British-era coir companies spun the golden yarn and made products from the natural fibre for the West, earning the town the sobriquet, 'coir capital of India'. The majestic snake boat race - inspired by Jawaharlal Nehru who stepped on the long boat once during a visit here - added a remarkable charm to the port town.

Soon, the emergence of Kochi with its big container port and facilities reduced Alappuzha to a mere tourism destination splattered with diesel-powered, smoke-spewing houseboats. Now, with houseboats and homestays lying idle and the boat race suspended, Alappuzha has been given an opportunity to rediscover its past by turning to contemporary art. And the artists have responded enthusiastically to the calls for participating in the show. The town's historical landmarks and the daily life of its coir workers, fishing community members and rickshaw pullers form the theme of Ernakulam-based Sunil Linus De's water colour works.

"We want Alappuzha to be known as a heritage and cultural centre along with its tag of coir capital," says Nowshad P.M., managing director, Muziris Projects Limited, an independent body created by the state tourism department to trace Kerala's links with the rest of the world spanning more than two millennia through the ancient Spice Route. "Our heritage project is in tune with art," adds Nowshad, who is heading the renovation of Alappuzha's major heritage landmarks that have now become venues for Lokame Tharavadu.

"The exhibition aims to give a renewed confidence to the community of artists. It is important to open up spaces for conversation and collaboration," says Krishnamachari. "It is important to build creative cities in India. Art, technology and design should go hand in hand in the future of a city," adds the artist who is looking forward to seeing cafes and libraries and aesthetically designed bridges springing up along the canals of Alappuzha. Both artists and industry leaders from the region as well as outside are excited at the transformation of Alappuzha triggered by the exhibition. "This is a landmark event in Alappuzha and for India. We have realised only now that our small town has remarkable spaces that could become galleries in our own backyard," says Deth."There are bigger heritage buildings in Alappuzha than Kochi," she adds.

Helna Merin Joseph, who completed her Master of Fine Arts in sculpture from the Sarojini Naidu School of Arts and Communication, Hyderabad, last year, says the KBF exhibition in Alappuzha has given her confidence for the future. "It is a privilege to be part of an international scale show that has famous artists," says Joseph, whose acrylic on wood works on gender inequalities are exhibited at the heritage venue of New Model Society.

Collectors and galleries are impressed by the emergence of a new exhibition on a scale and class that dwarfs even the biennale. "Many galleries have made enquiries about specific works and artists. They all want to connect with the artists," says Krishnamachari. "This will create opportunities for participating in shows within India and abroad as well as gallery representations for artists." A 35-foot long painting by Delhi-based artist George Martin at the coir warehouse-turned-gallery.