While all efforts are being made to contain the current conflict, there remains a possibility of things going out of control – either militarily and economically or just on the economic front. Either way, if the aviation industry is hit, there won’t be much impact on Indian carriers.

The last few weeks have been busy along the Line of Actual Control (LAC) with China. For the first time since 1975, India and China lost soldiers in a conflict. While many brave Indian soldiers lost lives in the clashes, social media was abuzz with a ‘Boycott China’ campaign, and WhatsApp messages with the list of companies with Chinese investments and mobile phone companies with roots in China were busy being forwarded.

The government was quick to cancel a few contracts that some Chinese companies had won. As the government contemplates additional measures on trade and commerce, will it also spill over to aviation?

The Chinese and Americans have been sparring over flights for quite some time, with both sides even banning flights for a while. Could that happen between India and China as well? Well, if it does, the Chinese carriers could have a lot more to lose than our carriers.

Air traffic services between the two countries are governed by Air Services Agreement (ASA), popularly known as bilateral rights. The current ASA between India and China allows for 42 frequencies, translating into six daily flights. China was one of the most ignored countries by airlines in India, until recently.

While the Chinese side utilised 41 out of the 42 frequencies, the Indian side was being represented only by Air India, with five weekly flights to Shanghai from New Delhi. And then, IndiGo jumped in. IndiGo launched operations last year to China, with flights from New Delhi to Chengdu and Kolkata to Guangzhou. The airline had announced flights to Chengdu from Mumbai but even the maiden flight did not take off as COVID-19 crippled the world.

How has the traffic been?

Indian carriers have not had much luck on routes to China in the past. However, IndiGo has been buoyant! Traffic has grown in the last few years and the airline was getting good traction – on both the passenger and cargo fronts -- on the route. In the past, Jet Airways and SpiceJet had failed to taste success on Chinese routes.

The Directorate General of Civil Aviation (DGCA) declares quarter-wise data for international routes and countries. While the data for 2020 isn’t declared yet, the one for 2019, split across four quarters, shows the traffic to mainland China being much lesser as compared to Hong Kong -- from and to India. 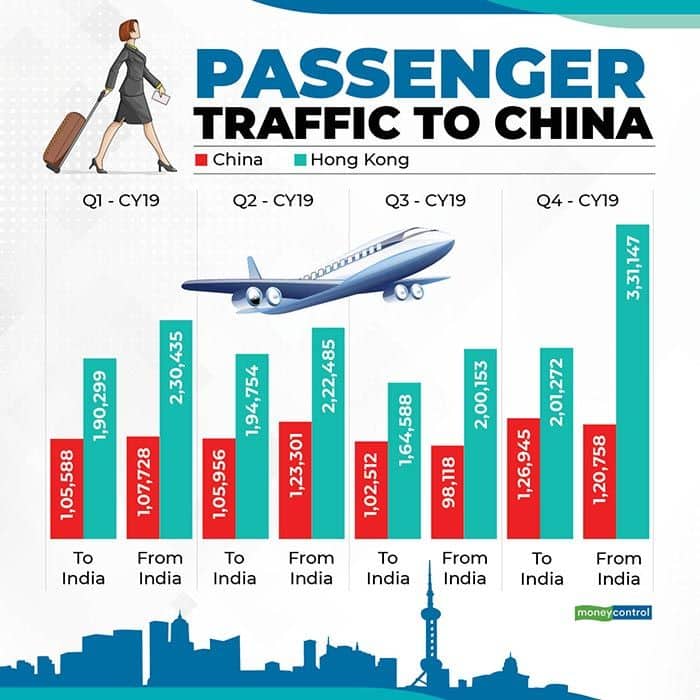 In the last few years, Chinese carriers were known to offer cheap tickets to North America via Chinese hubs. It led to the airlines getting into a price war. The market between India and the West Coast of USA is attractive. Air India operates flights to San Francisco and United joined the route recently. JAL, ANA, Cathay Pacific, Singapore Airlines, and Korean Air are some of the other airlines which have been wanting a slice of the pie.

One argument about flights to China has been around cargo. With an increase in trade – especially import to India of critical items like pharmaceutical APIs as well as other cheaper goods -- there has been demand from traders to fly to China and high-value goods coming in as air cargo instead of ships. 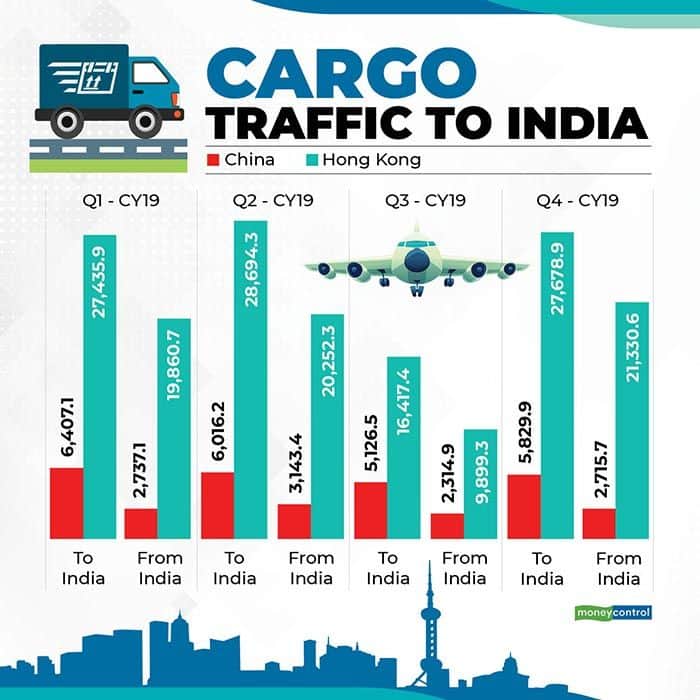 However, the cargo numbers are even more skewed in favour of Hong Kong. While Hong Kong is not a benchmark to compare cargo traffic with China, the close proximity in terms of geography and allowed frequency makes it an interesting mix.

While all efforts are being made to contain the current conflict and look for peaceful ways to disengage, there remains a possibility of things going out of control – either militarily and economically or just on the economic front. Either way, if the aviation industry is hit, there won’t be much impact on Indian carriers. Both Air India and IndiGo have very low dependence on China’s markets as far as their total international operations are concerned. In fact, the China pie on their total operations is miniscule!

With passenger traffic expected to see a slower rebound, there could still be an opportunity for the airlines to fly cargo services to China – which again depends on the trade barriers that may come up between the two countries. Cargo has been the attractive bet in all these months and SpiceJet, which does not have scheduled cargo or passenger services to China, operated a few cargo flights to cities in China during the lockdown period!

4 FDs you must invest in to beat low interest rates