Over the years, MMKR has acquired vintage status along with Pesum Padam (Pushpak). It has taken its position as among the best of comedies put together by Haasan.

It was 1990 and Kamal Haasan had just made a string of films in Tamil (Apoorva Sagothirargal; Rare Brothers), Malayalam (Chanakyan) and Telugu (Indrudu Chandrudu). These films were not only successful at the box-office but also were highly praised. Kamal needed a script to shoot himself up into the stratosphere and along came Singeetam Sreenivasa Rao and Panchu Arunachalam with Michael Madana Kamarajan (MMKR).

The film has Haasan playing quadruplets separated at birth. Michael, Madan, Kamarajan and Raju are born in a rich family but grow up in different households.

Michael runs a counterfeit currency racket and is hired to kill his brother but decides to take his place. Madan who is actually the son of the rich father is unknowingly legally adopted and takes over his dad’s company. Kamarajan, who is raised in a Palakkad Brahmin family, becomes a cook, and Raju is a firefighter who falls for the sexy Shalini Sivaraman (Kushboo).

MMKR opens with a tell-it-all song sequence in which children are invited to watch a movie on what seems to be a kinescope. An old man emerges from a coil of film to screen the movie for the children about the four brothers. The song “Katha Kelu Katha Kelu (‘Ye, hear a story’)” brilliantly encapsulates the preamble to all the action.

The movie had an OST that had seven songs, two of which were not picturised. The song, “Sundari Neeyum”, was shot in slow motion in 48 frames. Though it fades pale in comparison to the opulence of the present-day sets, it is quite an achievement that all the songs continue to have a modern touch.

As the movie begins, Madanagopal makes an entry fresh from London and makes it clear that he is the sole heir to his adoptive (in actual real) father’s assets. The late actor Nagesh, in a stellar performance, plays the PA who has misappropriated 25 lakh rupees belonging to his boss, Madan.

As the plot unwinds, we get acquainted with Michael. We are treated to a well-shot (BC Gowrishankar behind the lens) car chase set on the outskirts of Chennai.  Santhanabharathi plays Michael’s drunken, wayward and slightly dumb adoptive father.

At the end of the chase sequence, Michael runs into the basement of a gallery where Shalini’s paintings are displayed. The accident causes a fire and firefighter Raju comes to the rescue.

Thus ensues probably the funniest sequence in the movie when Kamarajan drops a fish in the sambhar at a vegetarian wedding. “Ellarum meen meen en pesikera (why is everyone talking about the fish?),” continues to be a great one-liner.

Slowly, we witness all four quadruplets trying to become Madan, all of them indirectly or otherwise for money as Madan is the moneyed one. Madan himself pays Raju to play his role while he does a bit of snooping around to find out who killed his parents.

The movie has its fair share of trick shots, all of them really well done. In fact, they are so good, they are passable even for present times. The movie seems to be shot on a modest budget. But it was a monster hit at the box-office. It also tickled the critics, who gave the movie a big thumbs up.

Kamal’s genius really shines in MMKR. His command over different dialects of the Tamil language is put to optimum use. Micheal speaks colloquial Tamil, Madan has a thick foreign accent sprinkled with English words, Kamarajan speaks Palakkad Tamil and Raju makes us laugh with Chennai lingo.

The gags fly thick and fast from ‘Crazy’ Mohan’s pen. This film is tailor-made for him and he really exploits this factor to full-hilt. This is as much a Mohan film as much a Kamal one, at least according to this critic.

Over the years, MMKR has acquired vintage status along with Pesum Padam (Pushpak). It has taken its position as among the best of comedies put together by Haasan. 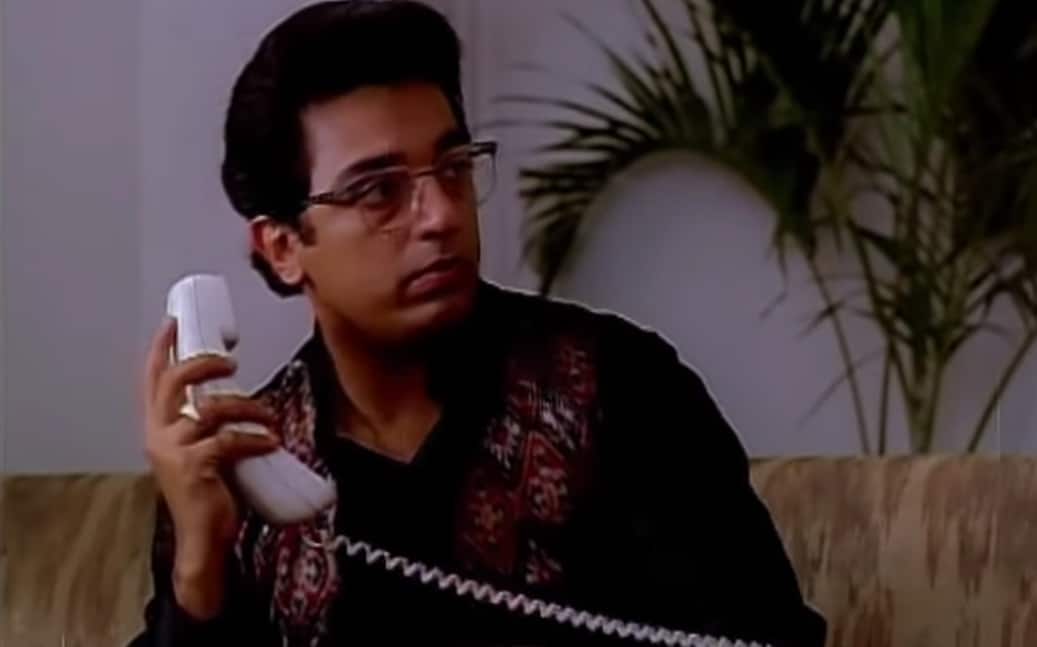 All characters have their motivations and contribute to the overall machinery of the movie. There is a large ensemble cast comprising the who’s who of the Tamil industry. Apart from Kushboo, who is at her prettiest in the movie, there is Roopini and more famously Urvashi, who puts in one of the best performances by any heroine in any Tamil movie.

In a scene in which Madan and Raju are talking to each other, we can see pictures of Hitler, Lenin and poet Bharathi, all of them possibly Haasan’s ideals. Raju later points out that all of them have uniquely famous moustaches even as he loses his own to act just like Madan. The whole movie rests on the fun that comes from all characters impersonating Madan for his money.

Genre compulsions and the criticism against stunt unions notwithstanding, the action sequences and the accompanying sound editing is really well-done. Stunt unions are often criticised for hijacking movies to include action scenes.

I don’t think MMKR had a huge budget. A random building, for example, is used as a stand-in for the Chennai Airport.

Another funny factor is Praveen Kumar’s turn as Bhim, who is Madan’s dim-witted bodyguard. At one point when Raju and Madan are peering into a mirror, Bhim says, “I see four people, Boss.”

The pre-climatic song sequence is among the funniest in Tamil cinema. All four characters played by Haasan make an appearance. Ilaiyaraja does a terrific job of mixing background music. His song, “Vechalum vekkama ponalum”, remains a YouTube favourite.

The story ends where it began. The old man packs up his kinescope and leaves after the children are finished with the movie. All said and done, this is only a film.
(Nandhu Sundaram is a journalist based in Chennai.)
Nandhu Sundaram lives in the tiny town of Arumanai in Tamil Nadu. He is a freelance journalist who writes on film and politics and the intersection between the two.
Tags: #Entertainment #Features
first published: Nov 28, 2020 10:48 am