Big launches and our top picks of luxury watches at the 2021 edition of the watch event organised in Geneva and Shanghai.

Earlier this month, a bunch of watchmakers took part in the second edition of Watches & Wonders, a digital watch fair that was formerly—in pre-Covid times—known as the Salon International de la Haute Horlogerie.

Here, we take a look at some big launches as well as interesting things that flew under the radar.

Jazz. Art Deco. Speakeasies. Automobiles with long hoods. The 1920s was really a roaring decade and among the watches that embodied the spirit of that age was the Vacheron Constantin American 1921. Part of a small series launched in America—hence the name—the watch had a distinctive cushion-shaped case, a diagonal dial display and an offset crown placement. In many ways, it was ideal for folks who loved driving, since they could tell the time without having to take their hands off the wheel.

The new Historiques American 1921 pays tribute to the original, and is now available in two white gold models, in 40mm and 36.5mm cases, and a limited edition 40mm platinum edition. The watch is powered by Vacheron Constantin’s manual-winding calibre 4400 AS, and has a power reserve of 65 hours.

The IWC Big Pilot Shock Absorber XPL, IWC’s big launch, might have polarised opinion, but the Big Pilot 43 ought to find favour with most watch lovers, especially those with smaller wrists. Derived from the 46.2mm Big Pilot, which was among the timepieces that popularised the trend of massive watches, the 43 is a much more wearable aviator watch that features the same clean dial layout of the original. The watch is powered by the in-house Calibre 82100 and comes in a range of strap options.

Most people wouldn’t associate Panerai with sustainability, but the Italian 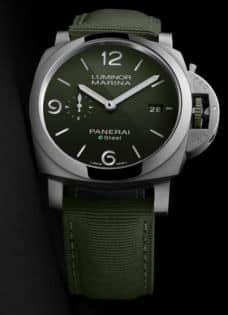 brand, popularised by Hollywood action heroes, has taken a big step towards eco-friendliness with its recent releases. Its concept Submersible eLAB-ID PAM 01225 is made almost entirely—98.6%—of recycled material.

If you are a Paneristi who wants to know what’s on offer right now, allow us to point you towards the Luminor Marina eSteel; 54.8% of the watch’s weight comes from recycled material, and that’s mostly the case and the dial that are made of eSteel, a ‘recycle-based steel alloy’. The 44mm automatics are available in three different versions, and feature a three-day power reserve.

Rolex’s Explorer II update might have got more press, but its sister brand Tudor’s Black Bay Chrono is no less a stunner. An improvement on the original 2017 model, the sports chronograph features a slimmer case as well as two new ‘panda’ dials. The case houses Tudor’s MT5813 movement, which was jointly developed with Breitling, and the watch is water-resistant up to 200 metres.

Looking for a sporty diver—and specifically a Tag? The Aquaracer Professional 300 Tribute edition could be just what you had in mind. The limited edition timepiece, which will be sold alongside the new Aquaracer collection, pays homage to the Ref. 844 from 1978, Heuer’s first dive watch. The dial references the Ref. 844’s  24-hour scale, and the Professional 300’s Grade 5 titanium case houses Tag’s Calibre 5 automatic movement. The 43mm watch, with pre-aged hour markers, will be limited to 844 units and is expected to be available in September.
Murali K Menon works on content strategy at HaymarketSAC.
TAGS: #IWC #Lifestyle #luxury #luxury watches #Panerai #Recommendations #Tag Heuerz #Tudor Black Bay Chrono #Vacheron Constantin #Watches and Wonders #weekend reads
first published: Apr 30, 2021 08:56 pm