Now in France, the young Ukranian women are determined to do whatever is necessary to help save the men's lives.

Ukrainian partners of Azovstal's soldiers of Marioupol, Olha Andrianova, Katerina Prokopenko and Hanna Naumenko pose during a photo session on May 15, 2022 in Paris.

Their menfolk are the last pocket of resistance in the Ukrainian city of Mariupol, holed up in a warren of underground tunnels and bunkers at the vast Azovstal steelworks under heavy Russian bombardment.

But while their partners, all fighters in Ukraine's Azov regiment, make a last stand at Azovstal, Olha Andrianova, Hanna Naumenko and Kateryna Prokopenko are engaged in their own personal battle -- to get the West to intervene to save them.

After leaving Kyiv on April 23, they stopped off at the Vatican, where they were granted a five-minute audience with Pope Francis, and also visited Poland and Germany.

Now in France, the young women are determined to do whatever is necessary to help save the men's lives.

"The more countries we go to, the more chances we have of finding a quick solution," said Andrianova, 30, the oldest member of the group of four women, three of whom spoke to AFP in Paris.

"We don't know which country can really help us. That's why we are reaching out to everyone," she said.

In France, a meeting with political figures -- starting with President Emmanuel Macron or his wife Brigitte -- would obviously be welcome but "it's not our main goal", said Naumenko, 25.

"The objective is to attract attention about the situation" in Azovstal.

Kyiv said on Thursday it was holding "difficult" talks with Russia to secure safe passage for 38 badly wounded fighters from Azovstal. The plant in the southern port city has been surrounded by Russian troops for weeks.

"It's not that it (the government) hasn't done enough but that it could do more", said Andrianova, who runs a network of creches in Kyiv.

All three spoke calmly about the perilous situation in which their partners find themselves and about the months they have spent apart.

Like many of the wives and girlfriends of Azov regiment fighters, they met their future partners online.

"We met on the net. We had the same hobbies, the same tastes in music and nature," explained Prokopenko, 27, a children's illustrator whose husband Denys is commander of the Azov regiment.

Naumenko, from Kharkiv, said she had postponed her planned wedding to fiance Dmytro several times since 2014.

"I kept pushing back the date because I wanted the war in Donbas to end and us to be able to live together like a real couple, because we only saw each other a few days a month," she said.

Since 2014, Ukrainian soldiers have been fighting Kremlin-backed separatists in parts of the eastern Donbas region -- which Russia now hopes to seize in its entirety.

The women still receive regular news from Azovstal but the situation is so critical that now "every day counts as much as six months or a year", said Andrianova. Her husband took two weeks to tell her he had been shot in the leg and was now among the injured.

Among the around 1,000 Ukrainian soldiers trapped there, nearly 600 are injured, according to Sviatoslav Palamar, deputy commander of the Azov regiment, speaking recently in a video pleading for their evacuation.

"There is no more food, and water is so scarce that the cups are shared at the rate of "one sip every six or eight hours", Andrianova added.

Since the steel plant's makeshift hospital was destroyed by relentless Russian bombardments, "people have been operated on (and) had amputations without anaesthetic".

Surrender is unthinkable. "It would amount to death. There have already been members of the Azov battalion taken prisoner. They were cruelly tortured and then the Russians sent the pictures of the tortured bodies to their mothers," she said. 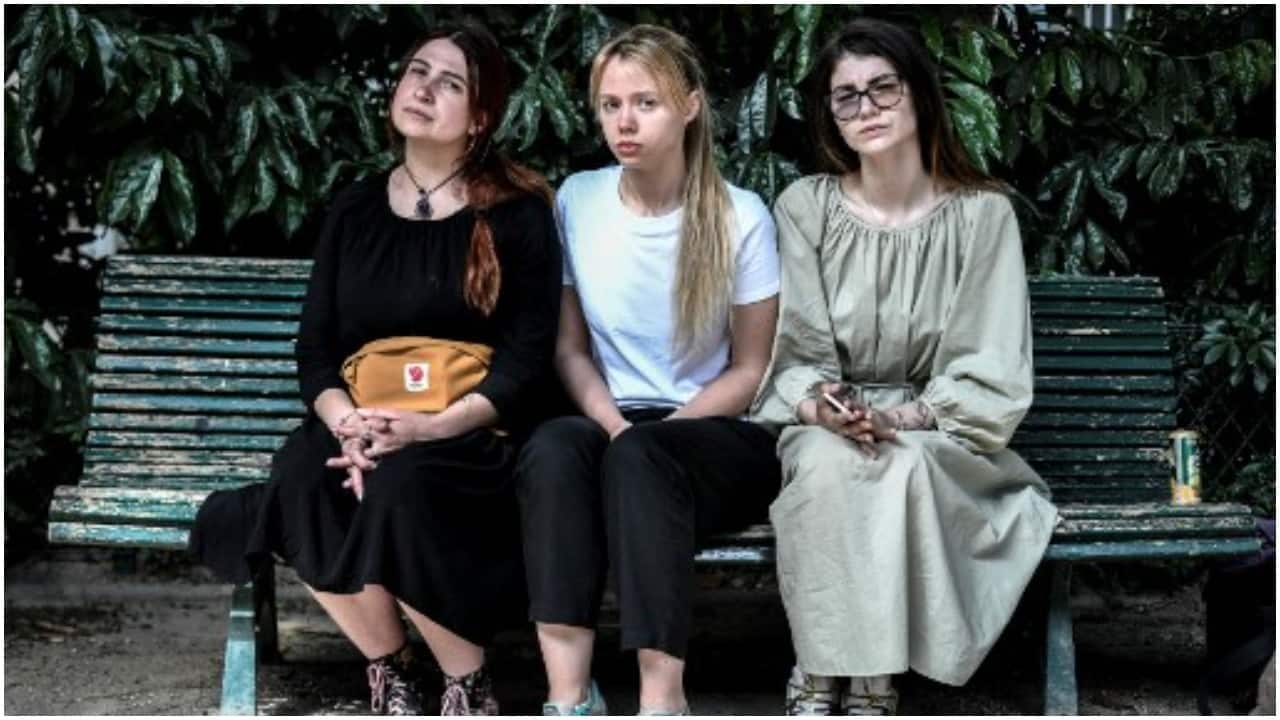 Ukrainian partners of Azovstal's soldiers of Marioupol, Olha Andrianova, Katerina Prokopenko and Hanna Naumenko pose during a photo session on May 15, 2022 in Paris.

The four women understand that despite their appeals and those made on social networks directly by some of the Azovstal fighters -- to Turkey, the United States and China -- no country has yet offered to help secure the release of the men.

Although the West may be boosting military aid to Ukraine, it insists it wants to avoid intervening directly in the conflict, for fear of provoking a direct conflict with Russia.

But the women refuse to despair and intend to continue their journey -- perhaps to Switzerland, Britain or Turkey -- until "our men are evacuated and freed", said Naumenko.

They have so far financed their trip themselves, they said, but several associations have offered to help them.

On Saturday, singer Oleh Psiuk of the Ukrainian group Kalush Orchestra, winner of this year's Eurovision Song Contest, highlighted the plight of the fighters from the stage of the world's biggest live music event.

Such initiatives give the women hope that someone somewhere will step in to help.

"It's fantastic", said Andrianova. "After the (Eurovision) win, the hashtags #SaveAzovstal were everywhere".

As for Naumenko, she said she was certain that Dmytro "will survive, that we will get married, and that we will have many children".
AFP
Tags: #Azovstal #Mariupol #Russia #Russian invasion #Ukraine
first published: May 16, 2022 08:17 pm