But can a great LED TV beat a decent QLED/OLED TV? Let's find out!

Sony recently dropped a new premium smart TV in India. Sony’s new Bravia X80K is a 55-inch 4K Smart TV that uses an LED panel as opposed to other TVs in this range from Xiaomi and LG that use OLED screens or even Samsung’s QLED options.

The Sony Bravia X80K TV is priced at Rs 94,990 in India for the 55-inch screen size. While the near-lakh price tag may seem like a lot, this isn’t quite the company’s premium range with its OLED models being priced significantly higher. However, Sony is renowned for its picture quality, irrespective of the panel used. So can the Sony Bravia X80K deliver a premium viewing experience despite the lack of an OLED panel? Let’s find out!

Before we dive into the features and picture quality, let’s take a quick look at the X80K’s design and build. The X80K has a bezel-less design on all four sides, while the bottom bezel houses Sony’s status light. The TV is a little on the thicker side, measuring 2.7-inch thick with a checkerboard design on the back. The TV comes with VESA wall mount holes on the back. 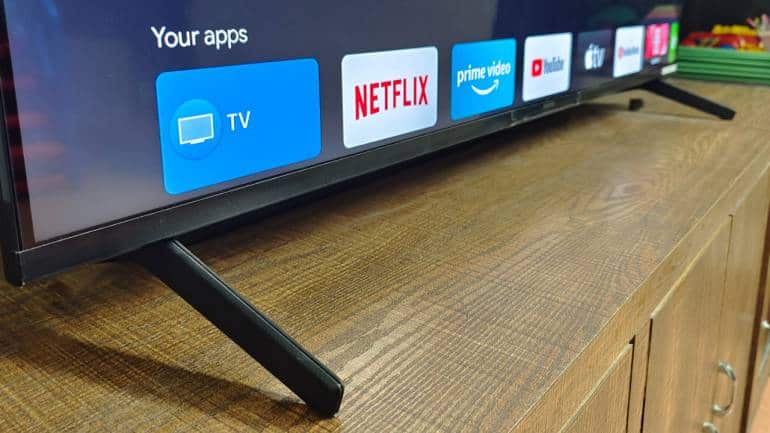 However, since the ports are shifted to the side, they are easy to access even if the TV is mounted on the wall. I used the stands from the box, which was pretty easy to install, although you’ll need a wide table. The stands are made of metal and are quite sturdy, ensuring the TV doesn’t wobble. The TV features a plastic build but that wasn’t really an issue as the TV was quite sturdy. Additionally, there are clips that attach to the back of each leg for better cable management.

Sony has opted for a more minimalist approach with the remote of the Bravia X80K. The remote’s design was quite sleek with well-spaced-out buttons. The remote also has all the buttons required to ensure excellent functionality. The remote comes with dedicated buttons for Google Assistant, YouTube, YouTube Music, Netflix, and Prime Video. Additionally, there are the standard buttons, including navigation controls. There are no channel buttons, but the single ‘123’ button on the top can be used to bring up numbers to switch to your desired channel. You can also pair your set-top box with the TV and control it using the TV remote, eliminating the need for two remotes. To put it plainly, Sony’s new remote perfectly balances form and functionality.

The Sony Bravia X80K has the standard assortment of ports. All the ports are located on the far right of the TV, while the power connector sits on the left. There are two USB Type-A 3.1 ports on the back and four HDMI inputs. However, you are limited to HDMI 2.0, while the HDMI 3 port supports eARC. The TV also has an Ethernet port, an RS-232C port, an IR input, and the usual antenna/cable connector. There are two noticeable absentees here, an HDMI 2.1 port and an analogue audio jack, although the latter is replaced by a digital optical audio output. The TV also comes with built-in WiFi (802.11ac) and Bluetooth v4.2 as opposed to newer Bluetooth 5.0. The lack of an HDMI 2.1 port was a let-down, but apart from that you pretty much have everything you need.

The Sony X80K uses a 4K LED panel with a standard 60Hz refresh rate. Sony is using the X1 4K HDR processor, which was the same one used on its successor, the X80J. The TV here also supports Dolby Vision, HDR10, and HLG formats. Sony’s X1 processor also features Object-based HDR remaster and a Dynamic Contrast Enhancer, the former analyses and adjusts the colour of individual objects on the screen and the latter automatically adjusts contrast settings according to your environment. Additionally, the TV can also adjust the brightness automatically based on the ambient light in the room. 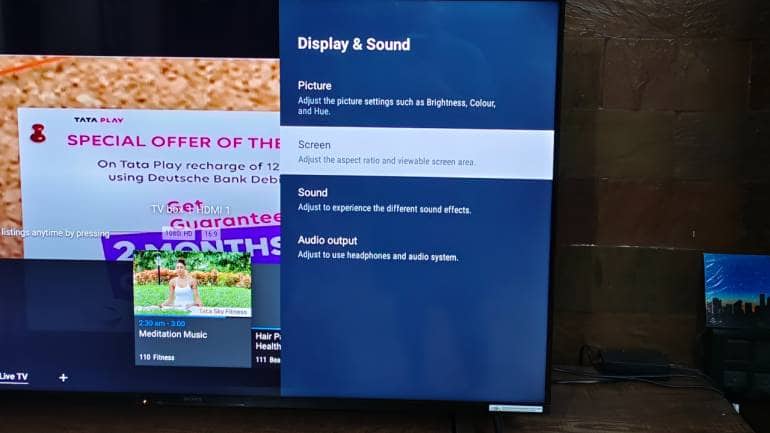 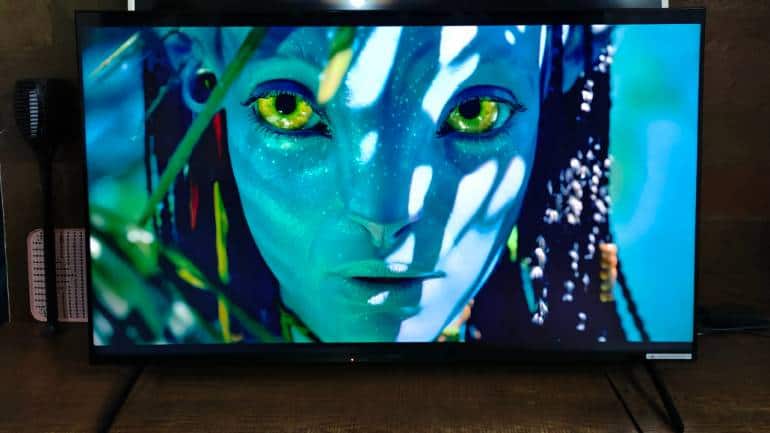 The one area where the X80K didn’t live up to expectations was in brightness output. In most instances, you won’t have a problem, but colours don’t quite pop as you’d expect when watching HDR content. The TV also comes with Dolby Vision Bright and Dolby Vision Dark, the latter is a slightly dimmer mode as compared to the former which is the default for most shows that support Dolby Vision. The Sony Bravia also reproduces crisp and sharp images with good colour reproduction, resulting in excellent picture quality. The X80K boasts some preset picture modes that can be toggled in the settings for gaming, entertainment, sports, and more. The panel also had excellent viewing angles and retained its picture quality despite watching it from different angles. Sony’s excellent picture quality and quality upscaling tend to make up for the drawbacks of using an LED panel instead of a QLED or OLED screen. However, that being said, the blacks on the X80K were irregular as compared to an OLED and the brightness levels were inferior compared to higher-end QLEDs.

Navigating Sony’s TV was quite convenient as the experience was smooth with no slowdowns. When gaming using the X80K, the TV automatically switches to the Auto Low Latency Mode. The TV recognised when I plugged a PS4 into the HDMI 2.1 port and automatically switched to the mode, which offers more responsive gameplay and reduces input lag. Additionally, MEMC technology deals with motion blur of fast-moving objects in games to ensure smooth gameplay despite the 50Hz panel. However, there is no support for VRR, AMD FreeSync or Nvidia G-Sync. As far as gaming on the X80K goes, it is best suited to more casual gaming and open-world titles as opposed to shooters that are best enjoyed with higher frame rates.

For software, the Sony X80K runs on Google TV, which is a more refined skin over Android TV. One of the greatest benefits of using Google TV is that once it has been setup up on one device, it brings all the important settings to other devices running on Google TV. Additionally, the interface is much cleaner than most versions of Android TV. The interface offers recommendations across various OTT platforms, offering a personalised homepage. You also get access to animated wallpapers that can be used when the TV is not in use to showcase its image quality. The Apps section gives you access to recommend and installed apps, while Library gives you access to saved content. Google TV’s recommendations are pretty solid, and you can also add content across platforms to your Watchlist, which sits in Library. The Sony X80K also comes with Chromecast and AirPlay support. It also supports Amazon’s Alex and Apple’s HomeKit. You also have access to the Play Store to search for a whole host of apps. Google TV certainly helps elevate the entertainment experience.

While Sony impressed on the visual front, the audio on the Bravia X80K was just about decent. The TV uses a standard 2.0 channels speaker system with a 20W power output with Dolby Atmos support. You can calibrate the audio to optimise sound depending on your room’s layout. Sony uses a special shaped X-balanced driver to ensure optical sound. The overall sound quality here is quite decent and is fine for watching the news or reality TV or even while watching cricket and football. There isn’t any jarring at high volumes and the vocals were quite clear. However, the speakers did lack bass and had a relatively narrow soundstage. The speakers here were quite average and you’ll want to pair the TV with an external audio system to enjoy movies and shows with the surround sound experience. The TV also has a far-field mic for hands-free access to Google Assistant, which worked well in a large room.

For a 4K LED smart TV, the Sony Bravia X80K fetches a hefty price tag. However, the X80K is anything but your average 4K LED smart TV. The Bravia X80K’s picture quality was always up to the mark, while the TV was particularly good at upscaling content and maintaining colour vibrancy. Additionally, the TV also comes with a highly functional remote with a minimalist design, the TV’s borderless design gives it a sleek look. Lastly, the Bravia X80K also features the latest Google TV, which had a ton of features and was particularly good at organising and recommending content. There were a few caveats here as well, including the TV’s inability to handle blacks as well as an OLED model and the visibly lower brightness level as compared to QLED TV models at this price. While the X80K may not be Sony’s best TV, it is more or the affordable side for the brand. So if you are looking for a good Sony 4K Smart TV under Rs 90,000, then you should definitely consider the Bravia X80K. As far as LED TVs are concerned, the X80K is as good as it gets, while it also offers better picture quality than most entry-level QLED TVs. However, the Xiaomi OLED Vision and the entry-level Samsung Neo QLED might give the X80K a good run for its money.
Carlsen Martin
Tags: #4K TV #smart TVs #Sony #Sony Bravia #Sony TV
first published: Jun 27, 2022 05:29 pm