The Lamborghini Huracan STO marks the end of a glorious era

The Huracan’s last hurrah is possibly its greatest iteration ever

I can’t quite recall the last time I drove past the grandstands of the Buddh International Circuit that quickly. Then again, there’s no time for recall when you’re piloting the new Lamborghini Huracan STO down the pit straight and into the first corner, braking harder than ever before. Not that hard braking fazes the STO.

In fact, nothing does. Lamborghini India, responsible for bringing this limited-edition car to India, has been putting it through its paces for over three days of consecutive hot laps and it’s yet to break a sweat. The carbon ceramic brakes on this car are more resilient than a nuclear bunker.

The Huracan STO is the most hardcore road-legal version of the beloved baby Lambo, now nearing the end of its decade-long lifespan. Based on Lambo’s 24 Hours of Daytona championship winning GT3 car, the STO (short for Super Trofeo Omologata) is about as close as a road-legal Huracan can get to being a race car.

The Huracan STO is the most hardcore road legal version of the beloved baby Lambo, now nearing the end of its decade long lifespan

Increased usage of carbon fibre is par for the course with such cars, but this is a different league of intense. Lamborghini has replaced the entire front section with a single-unit carbon-fibre clamshell bonnet, aka a cofango in Lambospeak, which is much lighter and more efficient in channeling airflow.

It also gets a nifty-looking dorsal fin running along the length of the engine bay. This, according to the brand, gives the car greater stability, begging the question – why hasn’t Lamborghini put these on all its cars? What’s refreshing is that instead of overly relying on electronics like so many modern-day supercars do, Lambo has taken a hammer-and-chisel approach to reducing downforce, by 53 percent no less, with a three-way manually adjustable, fixed-wing spoiler.

Inside it’s just as hardcore, with an uncarpeted floor, bucket seats, straps for door handles, and manually adjustable seats, and steering rack. In fact, the 12.3-inch touchscreen unit and the Alcantara bathed dashboard are the only indicators that this isn’t, in fact, a GT3 racer. And while the race-ready Super Trofeo GT3 version gets fibreglass doors, the heavy usage of carbon fibre on the door panels suggests plenty of fat has been trimmed here as well. Rear visibility? You’d have better luck parallel parking a Countach. 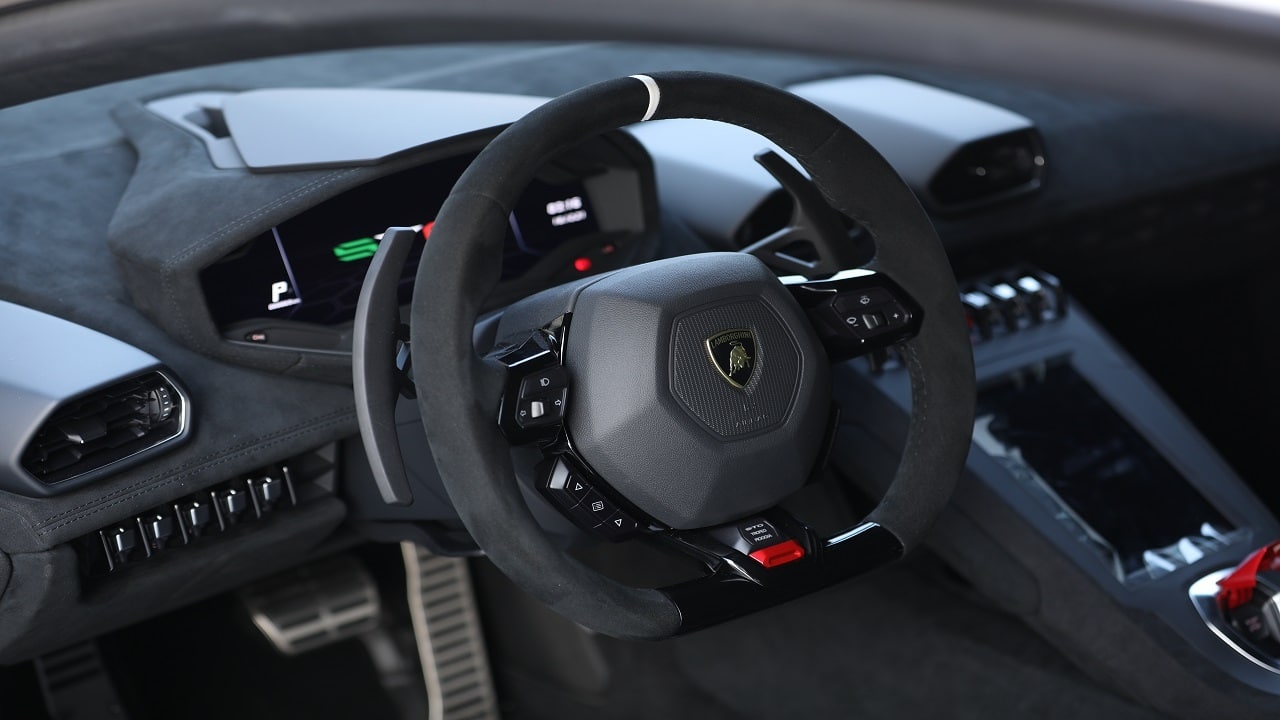 Inside it’s just as hardcore, with an uncarpeted floor, bucket seats, straps for door handles, and manually adjustable seats, and steering rack

The Bull on the Bonnet

Back in its pre-Audi era, Lamborghinis were famously temperamental cars that had to be mastered over time. Despite having extensively driven the Huracan and the Aventador in the past, the STO is the closest that a modern-day Lamborghini comes to matching that description. Switch to its ‘Trofeo’ mode, which is for track-use only, and you realise that where the STO rewards gumption, it punishes hubris instantaneously.

The 5.2-litre NA V10 motor is pretty much identical to the one found in the Performante.

In fact, Lamborghini has lowered the torque count here, along with the kerb weight. The STO is 43kg lighter than the Performante and makes 45Nm less torque, even though the power levels remain identical, at 630bhp. It’s the little details that have added to its phenomenal kinetic prowess. The windscreen is 20 percent thinner, the wheels are made of magnesium and a large chunk of the body panels, including the door inserts are made of carbon fibre.

The result is the sort of explosive performance I’ve never experienced during the endless laps around the BIC that I’ve clocked over the years. The STO practically sucked-in the horizon and left me so flushed with adrenalin, that I was buzzing long after I had exited its carbon-fiber encased confines. That dual clutch gearbox works better than it has on any Huracan and much better than the single-clutch unit on the Aventador.

Far from a baby Lambo, this is a hardcore, trouser-wetting supercar. Unlike the 4WD Huracan EVO which coddles you, and allows you to slide around to your heart’s content, the STO has a much smaller margin for error. Mid-corner throttle inputs have to be given judiciously.

Power out of a corner too eagerly and you will find yourself pointing the other way, even with ESC off, that’s just how raw and undisputed the throttle response is. No turbocharged performance car can ever come close to the synaptic response of this big, bruiser of a V10.

In Trofeo mode, you can hold the revs and watch them redline all the way to 8000rpm. The centrally-mounted touchscreen unit allows you to monitor brake disk temperatures, with a glowing shade of red indicating that a cool down lap or a pit stop is in order. In my time with the STO, that wasn’t a concern at all. In ‘STO’ mode, which is the most road-friendly of the three driving modes, the gearbox is telepathically quick in dropping down to 2nd or 3rd based on the throttle input. Exit the corner, mash the throttle and you’re zipping towards the next chicane in 2nd gear before you can think it. The windscreen is 20 percent thinner, the wheels are made of magnesium and a large chunk of the body panels.

I’m not one for technological snobbery or the idea of holding on to outgoing forms of technology out of some misguided sense of romanticism. But it’s hard to fathom how any emission-friendly alternative to cars like the STO, would offer this level of engagement. Even performance EV appeal tends to whither after the initial surge of acceleration, but purebred, naturally aspirated cars like the Huracan STO, just have so much to offer from the moment you fire up the ignition to the second you exit the car.

It’s flair for the dramatic aside, this is a proper Lamborghini track car, the likes of which didn’t exist three decades ago

Not every performance car has to announce its presence to everyone within a 3km radius like this car, but then, this is above all else a Lamborghini, and it’s a supercar theatre at its most flamboyant. It’s flair for the dramatic aside, this is a proper Lamborghini track car, the likes of which didn’t exist three decades ago.

For the moment however, the STO is in no danger of extinction. In fact, Lambo will make as many as there is demand for. And if their recent sales run is anything to go by, there’s plenty of demand. Lamborghini India has just clocked its best year in sales, thanks in large part to the Urus. However, according to the brand’s head Sharad Agarwal, special edition cars like the STO will also add to the bottomline and the allocation for such cars is only going to increase, when it comes to a priority market like India. 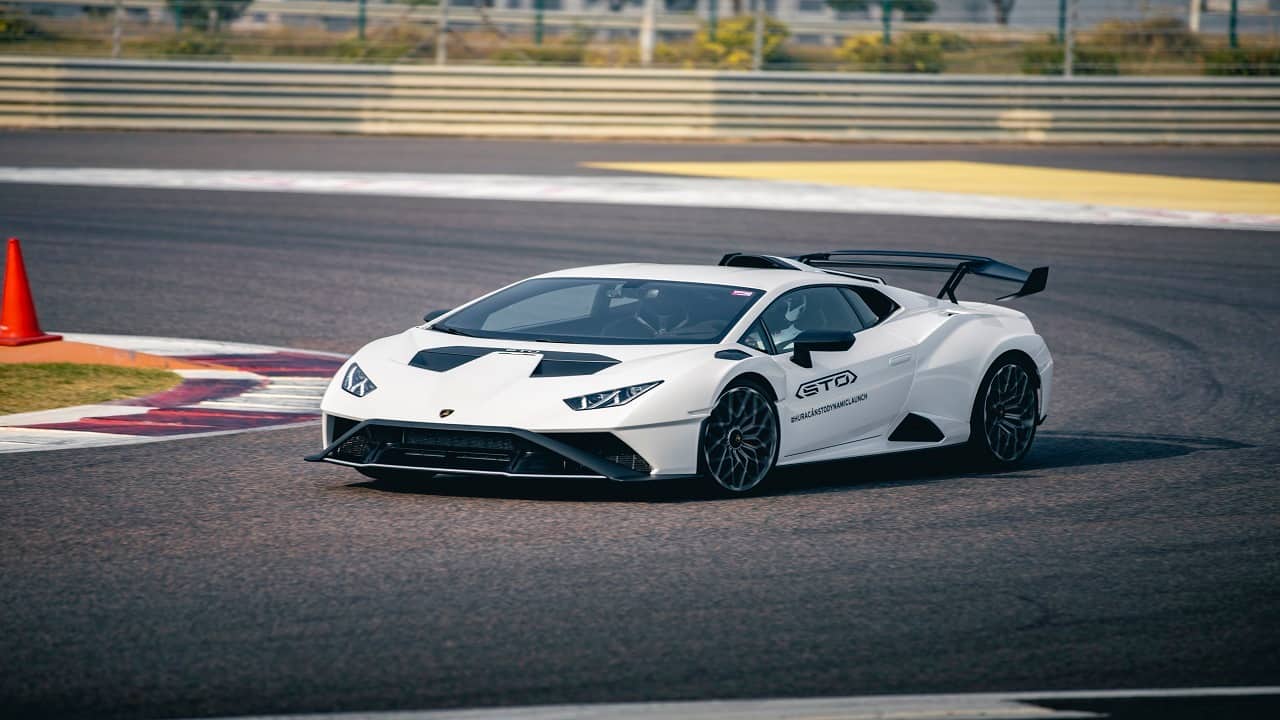 The fact that India’s racetrack infrastructure is also evolving helps heaps. It’s a true marker of the maturation of the Indian market, considering that something like this, seven years ago, would have gone to select few collectors, let alone get piloted around an F1 track by auto hacks like me. If this is to be the Huracan’s swansong, I can think of no better exit, that to go out guns-and-Akropovic-exhaust blazing.

The Huracan STO, is an era defining supercar that has arrived right at the end of its era. But given that it just goes on tirelessly, lap after hot laps and does not know what ‘limp mode’ means, there’s still plenty of fun to be had before we ultimately bid the ultimate Huracan, goodbye.