The most important aspect of a gaming laptop is delivering on performance and the ROG Strix G15 doesn’t disappoint in that aspect.

The Asus ROG Strix laptops have consistently delivered impressive gaming machines that stand out for both their design and performance. The ROG Strix series sits right under the top-tier Zephyrus lineup, but at times are even more impressive offering flagship hardware at a more affordable price than the top-end Zephyrus notebooks. And the new ROG Strix G15 continues this tradition.

Unlike recent Strix laptops, the latest Strix G15 swaps out Intel processing hardware for the latest AMD 5000 series mobile CPUs. But can the combination of AMD’s latest Ryzen processors and Nvidia’s powerhouse RTX 30-series graphics give the ROG series yet another win? Well, stick around, and let’s find out.

First off, the ROG Strix 15 is not very good at being subtle. From the moment I unboxed it, the laptop screamed gaming. But before we get into the design, let’s talk about what’s in the box. To ensure you are never found lacking, Asus has included a gaming mat for your table and a gaming mouse in the box along with the charging brick and cable. I would have really appreciated a webcam because, spoiler alert, this doesn’t have one. But you really can’t complain when there’s a gaming mouse and mat bundled in the box.

Unlike its Zephyrus counterpart, the Strix G15 is made out of plastic. While the lid is made from aluminium, the rest of the chassis is plastic, although the laptop feels pretty solid. The one thing I did notice was the flex on the lid. Additionally, there a pink plate with the ROG logo on the left side of the laptop, behind the hinge. The ROG letters are also stencilled on the keyboard, while there’s a more obvious logo on the lid. In terms of RGB lighting, the Strix has an RGB logo on the lid and an RGB LED strip on the front of the laptop under the palm rest.

Moving on to the inside, the ROG Strix’s keyboard features a chicklet style per-key or 4-zone RGB lighting. There’s no Numpad on the left, but you do get a couple of dedicated media buttons on the right and top of the keyboard. Overall, I felt the keyboard was really good for gaming, with the keys offering a decent amount of travel and spacing between the keys. Asus’ ROG lineup of gaming laptops has always delivered reliable keyboards and the new Strix G15 is no exception. 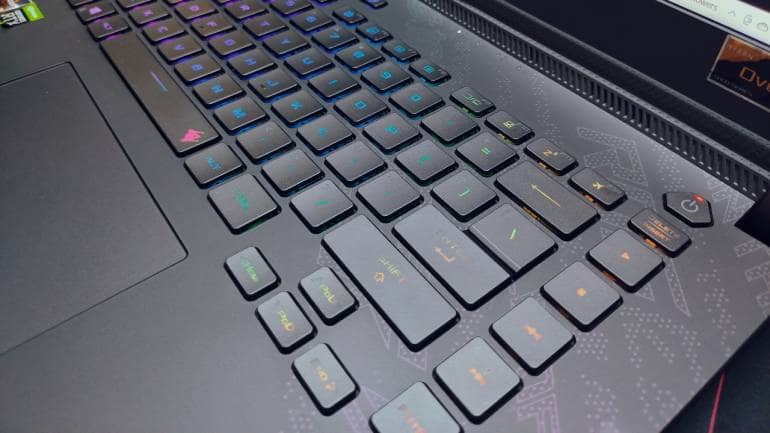 The laptop also gets a glass touchpad that Asus claims is 85 percent larger than previous models. The touchpad was quite convenient to use, with its smooth surface, ensuring no issues with palm rejection. The Strix also doesn’t have an LED Numpad on the touchpad. The keyboard on the ROG Strix 15 is excellent for both gaming and working, while the touchpad gets the job done. Not only is this touchpad pretty decent, but Asus has also included a mouse in the box, so no complaints here.

In terms of I/O, there are two USB Type-A ports and a headphone jack on the left. There’s nothing on the rest, the rest of the ports are located on the back of the laptop. These include an HDMI port, a USB Type-C port, another USB Type-A port, an Ethernet jack, and a charging port. The one noticeable absentee here is the webcam, which didn’t quite make sense as remote working and learning are gaining popularity. If you don’t factor in the lack of a webcam, the overall port selection here is top-notch.

One of the biggest highlights of the Strix G15 is the new 15.6-inch Quad HD (1440p) IPS panel with a 165Hz refresh rate and a 3ms response time. The higher resolution ensures vibrant colours with rich details, covering a wider colour gamut than Full HD (1080p) laptop panels. Content creators will also benefit from the Pantone certification on the panel and a 100 percent DCI-P3 coverage. 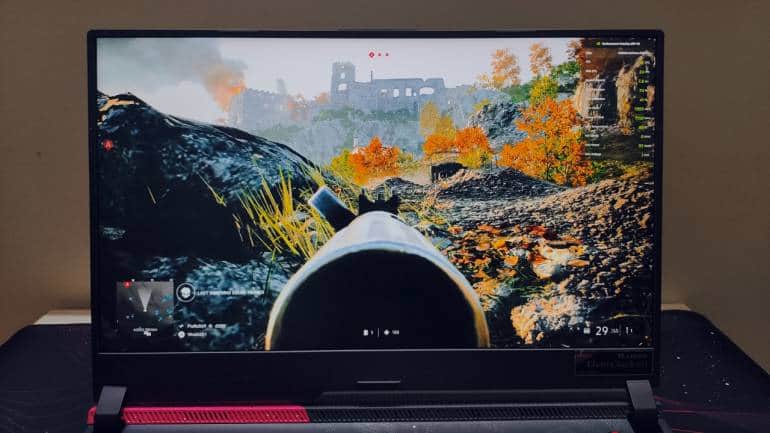 What I really like about the Strix G15 is the nice balance between resolution and refresh rate, giving the user the best of both worlds. It is worth noting that if you are more of an E-sports gamer, Asus also offers a Full HD (1080p) panel option with a refresh rate of 300Hz.

The Asus ROG Strix G15 can be configured with an AMD Ryzen R7-5800H or R9-5900HX CPU. Our model came with the AMD Ryzen R9-5900HX, an 8-core, 16-thread CPU. The laptop also uses Nvidia’s GeForce RTX 30 Series GPUs, with our model getting the RTX 3070 graphics card. The CPU and GPU were paired with 16GB of DDR4 RAM, expandable up to 32GB, and a 1TB NVMe SSD. Now, let’s see how this formidable spec sheet does in terms of real-world performance. The new Strix G15 can handle AAA titles with little effort. We managed to consistently get between 60 fps in Call of Duty: Black Ops on Ultra settings at Quad HD resolution and ray tracing turned on. Without ray tracing, frame rates saw a dramatic increase, consistently delivering above 80fps in Quad HD resolution. If you are partaking in some competitive multiplayer and decide to switch all the resource-heavy features off, you’ll get around 120 fps on average in Full HD resolution with Ultra settings.

Battlefield V revealed the same story, offering an average of 70fps with all the settings maxed out in 1440p resolution. Turning off ray tracing and DLSS bumped the fps by around 20 percent while switching to Full HD resolution consistently delivered over 130 fps. It is worth noting that Battlefield V looked amazing with the settings turned up to the max. Shadow of the Tomb Raider managed an average of 85 fps in Quad HD resolution.

— Carlsen Martin (@Carlsen0491) June 30, 2021
In games with high fps demands like Overwatch and Apex Legends, the Strix G15 delivered 165 and 150 fps on average, respectively. However, you can expect a further boost in frame rates by turning the resolution down to 1080p, although with the monitor maxing out at 165Hz, I don’t think that would be necessary. Lastly, Doom Eternal managed 155 fps in Full HD on Ultra Nightmare mode and 130 fps in Quad HD resolution.

When it comes to benchmarks, the Ryzen 9 chip did quite well, scoring 7526 points and 1035 points in Cinebench R23’s single-core and multi-core tests, respectively. In Geekbench, the Strix G15 managed a single-core score of 1078 points and a multi-core score of 5452 points. In Geekbench’s CUDA GPU test, the RTX 3070 managed a 39,511 score. The Ryzen 9’s powerful multi-core performance makes it a formidable tool for content creation as well. 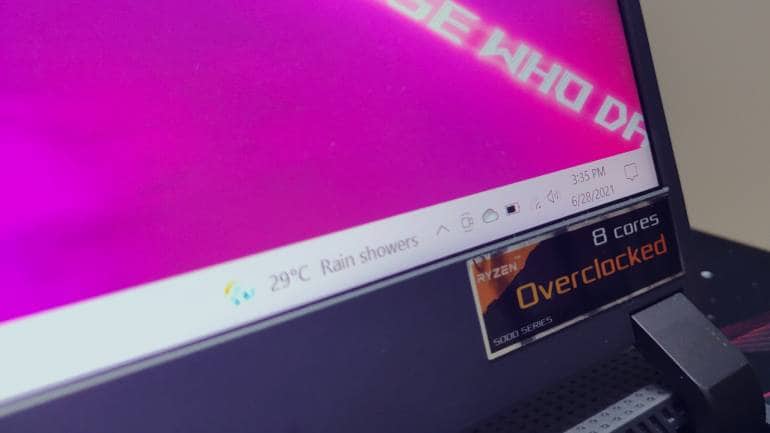 An impressive specs sheet cannot go far without an optimal cooling solution. And the ROG Strix G15 doesn’t disappoint with an intelligent cooling system that offers plenty of vents, heat pipes, and exhaust space for the fans. Additionally, Asus is also using liquid metal instead of traditional thermal paste. All of these keep the laptop cool under pressure while keeping temperatures over the keyboard deck well under control. The laptop does tend to run hot under pressure, but that just the cooling system kicking in. While gaming in Turbo mode, the laptop managed to consistently keep CPU and GPU temperatures in the mid-80s. 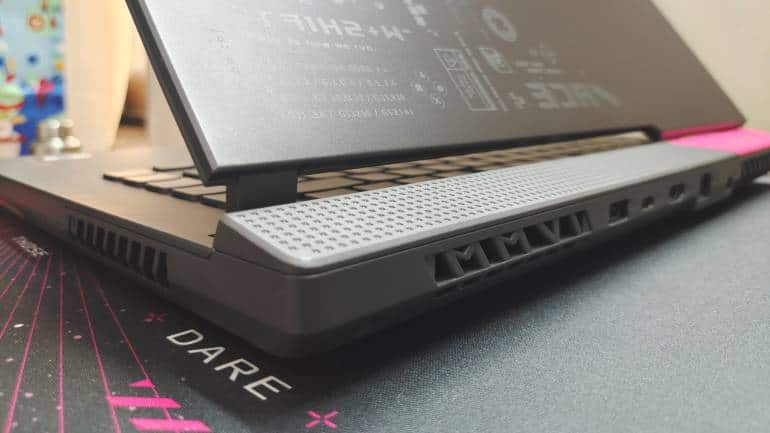 There’s quite a bit of noise produced in Performance and Turbo modes as the fans work at keeping temperatures under control, but most of it is drowned out by the speaker system. The audio quality here is pretty decent but still far from the best we’ve seen on more expensive Asus laptops. Additionally, a two-way AI-noise cancellation mic does an excellent job at dealing with background noise. During my review, I didn’t require an external speaker or headset to clearly hear the audio or speak to teammates while gaming. However, the same couldn’t be said for watching videos and movies.

The ROG Strix G15 packs a 90Whr battery that charges over a 240W adapter, which is noticeably smaller than previous editions. I expected the Strix to offer better battery life than previous models thanks to the new 7nm Ryzen chip. However, I was blown away by how well the Strix did, managing to deliver around seven hours of battery life for a mix of work and entertainment. When multi-tasking between Chrome and MS Word, the notebook offered around seven hours of battery life, although I did have to take some power-saving measures like reduce brightness to 60 percent and switching off the LED lights. However, I felt battery life was quite impressive, especially considering the Strix features an 8-core CPU and one of the most powerful mobile GPUs around. I didn’t bother with gaming on battery life, but I can definitely see the Strix go the distance while multi-tasking.

With a price tag of Rs 1,64,990, the new Asus ROG Strix G15 doesn’t come cheap. However, it isn’t the most expensive gaming laptop around, especially when you factor in that impressive spec sheet. If you consider the prices of gaming laptops in India, the new Strix G15 is more affordable than most of the competition. There are definitely a few noticeable compromises with the build quality, while the lack of the webcam was downright disappointing, but those can be easily overlooked with the improvements on the inside. Thanks in major part due to the Nvidia RTX 3070 GPU and the AMD Ryzen 9 CPU, the G15 delivering performance on par or better than the top-end, 2 lakh and above, gaming laptops of last year. Moreover, Asus’ impressive cooling system and Quad HD display, make the new Strix G15 an absolute gem. And then there’s the battery life, which will start giving regular notebooks a run for their money. Sure, the keyboard is comfortable and the over-the-top gamer aesthetic is eye-catching. But that shouldn’t distract from what the new ROG Strix G15 truly is; an “absolute mobile powerhouse”. The most important aspect of a gaming laptop is delivering on performance and the ROG Strix G15 doesn’t disappoint in that aspect.