The ‘Deshbhakti Curriculum’ aims to develop children’s sense of belonging to the country and help them realise that patriotism should not be reserved just for special occasions like Independence Day or Republic Day.

AAP chief Arvind Kejriwal raises slogans during his speech after he was sworn-in as the Chief Minister of Delhi for the third time, at a ceremony at Ramlila Maidan in New Delhi-Feb 16, 2020 (PTI)

The curriculum, which doesn’t have any textbooks, is gradually being rolled out from nursery to Class 12 as schools reopen.

“In the last 74 years, we taught physics, chemistry and maths in our schools but did not teach ‘Deshbhakti’ to the children. Patriotism is within all of us but it needs a push. Every child in Delhi will be a patriot in the truest sense. The ‘Deshbhakti Curriculum’ will prove to be instrumental in the country’s development and will take India forward rapidly,” Kejriwal said at the launch event, held at Delhi’s Chhatrasal Stadium.

Announcing the curriculum two years ago, the Delhi government said that its Happiness Curriculum and Entrepreneurship Mindset Curriculum were already in place and on the same lines, the ‘Deshbhakti’ curriculum would be introduced to help students become “true patriots”.

The objective of the curriculum is to inculcate pride, love and respect for the country in the mind of every child, according to the teacher’s manual unveiled at the launch event. It also aims to develop children’s sense of belonging towards the country and to help them realise that patriotism should not be reserved only for special occasions like Independence Day and Republic Day. The curriculum also seeks to get students to ponder over the problems before the country.

“It will not just talk about patriotism, but inculcate a passion for it. It will not preach moral values. We will not expect students to memorise historical facts, but will expect them to introspect about their patriotism,” said Deputy Chief Minister Manish Sisodia, who also holds the education portfolio.

The curriculum has been divided into three sections: from nursery to Class 5, Classes 6 to 8 and Classes 9 to 12. The government has released the teacher’s manual for Classes 6 to 8 and 9-12, along with a handbook comprising 100 stories of freedom fighters. The handbook for nursery to Class 5 will be unveiled when schools reopen for these sections. 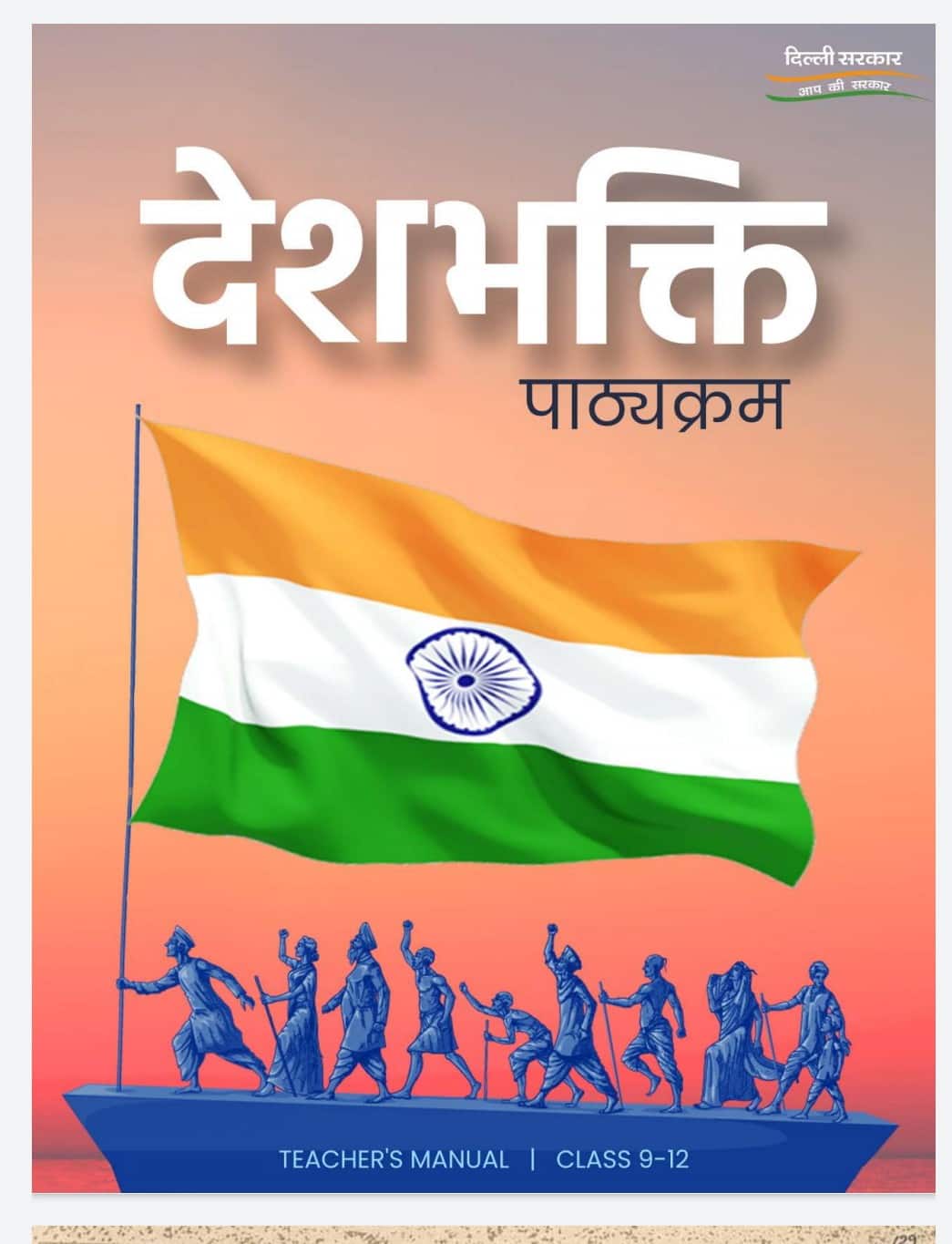 The manual for Classes 6 to 8 has seven chapters and the one for Classes 9 to 12 has five chapters.

The Delhi government had constituted a five-member committee in September 2019 to consult stakeholders, experts, and individuals working in the field of education to help draft the curriculum, plans for which had been announced a month earlier.

The manual for Classes 6 to 8 has seven chapters and the one for Classes 9 to 12 has five chapters. Chapters in the handbook include ‘My India is glorious but why not developed?’, ‘Deshbhakti: My country, my pride’, ‘Who is a Deshbhakt’ and ‘India of my dreams’.

Also, read: Politics | AAP has a second chance to fulfil its national ambitions

The teaching method will be activity-based, such as maintaining a 'Deshbhakti Diary’, participating in ‘Deshbhakti Dhyan’, ‘Flag day’ activity and group discussions.

There will be one ‘Deshbhakti’ class every day for students from nursery to Class 8, and two sessions per week for those in Classes 9 to 12, according to reports. Every class starts with ‘Deshbhakti Dhyan’ in which students will be asked to share their thoughts about their gratitude for the country and pledge respect for the nation.

For Classes 9 to 12, teachers will facilitate group discussions on topics such as the contribution of freedom fighters and activities such as respect for the Tricolour, for farmers and for the parents of those in the armed forces.

Among other activities, each student will be asked to make a flag and keep it with him/her. In the ’Homework’, students will be asked questions based on class discussions. They will be required to talk to three adults — one from the family and two outside the family (relatives or friends) — and note down their viewpoints.

The curriculum has framed a set of specific questions to be asked of students. One of the questions for classes 6-8, for example, is: “Which aspects of the country do we actually respect?” A question for students of Classes 9-12 asks them to identify reasons why India is not a developed country.

Evaluation and dos and don’ts for teachers

The handbooks insist that a teacher should mind his/her choice of words while imparting the curriculum. If a sensitive issue is discussed, a teacher is instructed not to give his/her opinion, but let students come to their own conclusions.

Teachers have been asked not to scold children who have not completed their homework, but, instead, give them more time.

Students will be assessed through a 360-degree evaluation involving self-assessment, peer assessment, and assessment by the teacher.

There will be no formal examination or grading system; the emphasis is on observing and assessing development of values, behaviour and actions.