Once waste management is introduced, and water contamination is taken care of, India will witness considerably reduced expenditure on health-related diseases.

There are three schemes of Prime Minister Narendra Modi which could actually transform much of India. And they're all relate to water and waste management -- in ways that cannot be imagined. Yet, crafty bureaucrats and sticky fingers will do their best to ensure that the linkages are not fixed, and the PM's ambitious schemes remain incomplete, and at times even embarrassments.

One is the Swachh Bharat Mission or SBM which talks of a spend of Rs 1,33,000 crore over five years for rural India alone. This translates into Rs 26,600 crore a year. Swachh Bharat is about building toilets and preventing open defecation. No other prime minister has come out boldly in favour of such a scheme – which is today a mission.

Second comes the Ujwal Bharat programme that saw the government's subsidy bill soar to Rs 45,000 crore last year. Ujwal Bharat aims at providing a gas connection to every home, especially in rural areas. This would ensure that women do not have to breathe fumes that are released when burning firewood. It would also help reduce deforestation. In fact, according to the Economic Survey 2016-17 Volume 2, respiratory ailments alone are believed to be responsible for 1,15,000 deaths each year.

The third is Ayushman Bharat which had a Rs 62,659.12 crore allocation in the recently tabled budget. This refers to the world's largest medical insurance programme for the needy at highly subsidised premium rates.  Each household gets a cover of Rs 5 lakh per annum. When it reaches out to its self-imposed target of 50 crore people or 10 crore households, the insurance cover could touch a mind-boggling Rs 5,000 lakh crore.

Water and waste management is key

Binding all of these together is water and waste management which, according to World Bank estimates -- for India's total water and sanitation sector -- is worth $420 million, with an annual growth rate of 18 percent. But these figures could be modest, as the total cost could exceed $80 billion. The growth rate could even exceed 18 percent per annum.

When confronted with such numbers, the first question to ask is whether this expenditure is worth spending. And the answer is an unequivocal yes.

First, as surveys of the World Health Organization (WHO) have shown, water (and food) borne diseases account for 4.1 percent of the total daily global burden of diseases, and cause about 1.8 million deaths annually. Almost 88 percent of that burden is attributable to unsafe water supply, sanitation and hygiene.

When it comes to India, "around 37.7 million Indians are affected by waterborne diseases annually; 1.5 million children are estimated to die of diarrhea alone and 73 million working days are lost due to waterborne diseases each year. The resulting economic burden is estimated at $600 million a year. The problem of chemical contamination is prevalent in India with 1,95,813 habitations in the country affected by poor water quality."

"According to one estimate (Parikh, 2004), India lost about Rs 366 billion (over $50 billion), which account for about 3.95 percent of the GDP, due to ill effects of water pollution and poor sanitation facilities in 1995. If India had made efforts for mitigating these affects in terms of providing better sanitation facilities and doing abatement of water pollution the required resources had ranged between 1.73 to 2.2 percent of the GDP." 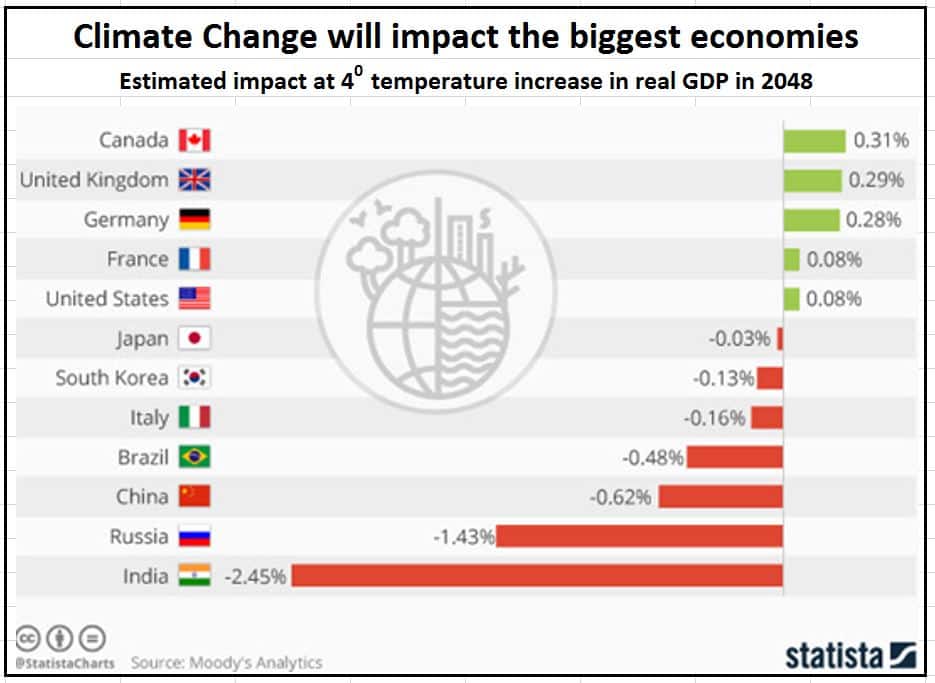 Thus, one way for India to push its GDP up, is by increasing productive man-days, reducing the cost of medicare, using the money to create more jobs in productive sectors of the economy, and improving water availability.

As mentioned in the first article of this series, water consumption by industry zooms, as a nation industrialises. Expect that to happen in India as well. Climate change could hit India harder than most other countries.

The biggest benefits from water and waste management will therefore have to come from agriculture and industry. Agriculture will have to work with less water, and industry will have to learn to recycle more, and swiftly transit towards a zero-discharge state.

If this does not happen, India's GDP growth will falter. This is because needless expenditure on continually cleaning waste – essentially a non-productive activity as pollution by industry and humans is allowed to continue – will eat away productive resources.

Prescription for the government

What should India do?

First of all make any kind of pollution akin to terrorism, an anti-national activity. Introduce zero discharge regulations with immediate effect. As an earlier article shows, zero-discharge is immensely feasible. What is needed is effective implementation of regulation.

To make zero discharge possible, compel business units to ramp up zero discharge facilities. If required, use SGS  – the global monitoring agency – to supervise effective implementation. This is extremely urgent.

As things stand, the picture is grim (see table below). Even if one considers just Grade I and Grade II cities, the current sewage treatment plant capacity will meet barely 10 percent of the sewage treatment requirement by 2022.  Urban waste management for such cities will require an investment of under $3 billion. However, if all waste management is taken into consideration, even for smaller cities, the prestigious Techsci research report believes that the STP market should be worth around $70-80 billion in India.

About 60 percent of the market size is municipal and 40 percent is industrial. The volumes are a lot greater in municipal waste, but the technical challenges are much more in industrial water.

Finally, introduce the concept of polluter pays for the type of effluent he generates.

Swachh Bharat loses its meaning if water and waste treatment are missing.  Without it, income cannot be generated out of either heat, or recycled water, or through methane generation for cooking. Methane from waste alone has the potential of wiping out India's balance of payments.

That is when Swachh Bharat will become a blazing route to economic self-reliance. Without water and waste management, it remains mere tokenism, and the mere building of toilets which are either not used, or have lost their economic significance.

Without water and waste management, you can kiss the PM’s grand vision a sorrowful goodbye. Yes, doctors will earn more treating patients; pollution control inspectors will thrive through graft. And getting India past the $5 trillion-mark will become that much more arduous.

In the backdrop you will have water wars instead. Amen.