With salaries skyrocketing and Rs 1-cr package becoming the normal even for professionals with 8-10 years’ experience, the gong has never been so good for techies, say executives. The trend is likely to continue in 2022 as well. So, all that techies need to do is this one thing: learn to enjoy the ride!

Raghav (name changed), a cybersecurity expert at a nationalised bank in Bengaluru, recently joined an American multinational for a salary of Rs 35 lakh, almost double what he was earning in the bank. It was his fourth offer in a month, after two offers from two IT services firms and one from a multinational bank.

Pranav (name changed), a senior engineer, is all set to join a Bengaluru-based unicorn for a 100 percent jump in salary, along with ESOPs. This is his second offer. In his own words, he is holding out for better opportunities that would come his way during the notice period.

The tale of Raghav and Pranav, in short, describes the story of 2021, where technology talents reigned. It was a year where sky-high salaries and multiple job offers became the norm, as companies and start-ups paid top dollars to hire technology professionals to cater to the growing demand.

According to executives, recruiters and start-ups, the trend is likely to continue in 2022 as well, as demand continues to outstrip supply.

One of the most commonly used phrases by start-ups, enterprises and recruiters alike, in 2021, was, “There is no better time to be a techie than now.” The rising attrition, record job openings, and desperation with which companies were hiring stand testimony to that.

So far in 2021, there have been 2.7 lakh job openings as opposed to 2 lakh in 2020, according to a report by Xpheno, a specialised staffing firm. This demand is driven by technology hirings across IT, start-ups and internet companies.

The report further estimates that technology hiring for FY22 will be anywhere between 3.7 and 4.6 lakh. Attrition, the report pegs, will be in the range of 19-22 percent, on average, with start-ups seeing the highest at 22-28 percent.

In a report shared with Moneycontrol, staffing firm TeamLease said that tech hiring had seen a 163 percent increase in June 2021, compared to the same period last year, and 51 percent higher than in June 2019.

Take the Indian IT sector, one of the largest private sector employers in the country. This sector is all set to hire 4.5 lakh gross employees between October 2021 and March 2022, up 12 percent from what the companies hired in the first six months of FY22, according to a report by market intelligence platform UnearthInsight. What is driving the hiring frenzy in IT?

There are a couple of reasons. For one, when the pandemic struck, enterprises cut down spending to conserve cash. IT firms, on their part, paused hiring and deferred promotions and wage hikes in April 2020.

But two quarters later, demand for digital technologies increased and companies were unable to keep up with growing demand as clients stepped up and prioritised technology spending.

Abhishek Sinha, COO & Board member, L&T Technology Services, explained that one of the reasons was extreme offshoring when companies shifted to work from home, getting employees back to countries like India. “The industry was not ready for the pace of offshoring we witnessed since the pandemic,” he said. Offshoring increased over 5 percent for some companies, and it is unlikely to go back to the pre-pandemic level, he added.

Many executives in recent interactions with Moneycontrol said that the demand is so high that they had to let go of clients to keep up demand from existing customers.

Sanjay Jalona, CEO, L&T Infotech, said in a recent interaction that the company would have grown faster, if not for supply-side challenges. Sachin Tikekar, President, KPIT Technologies, shared that they are unable to keep up with demand and have to decline certain business opportunities to work with existing clients.

Brian Humphries, CEO, Cognizant, said during an earnings call that the company had to choose which clients and deals to pursue due to supply-side challenges.

All these have resulted in a huge demand for a limited pool of technology talents, with companies willing to pay significant hikes, and ESOPs, to retain and attract talent.

A top executive from a midcap IT company said that the company is willing to give even 50 percent hikes for top candidates.

HCL Technologies included Restricted Stock Units in the compensation mix to retain high performers in October, covering close to 3,000 senior executives. Under this model, which was approved by the board on October 14, the company will move from 100 percent cash awards to a mix of 70 percent cash and 30 percent RSUs for the grants. This is subject to board approval. KPIT Technologies, too, expanded its existing ESOP pool to include more employees in a bid to retain talent.

Companies are also stepping up fresher hiring.  The top four IT firms alone will be hiring a record 1.6 lakh freshers in FY22, double of what they hired in FY21. This is in a bid to keep up with demand, and growing attrition, which experts estimate will continue till mid FY23.

If traditional IT companies were willing to pay huge hikes and dole out ESOPs, imagine how far funded start-ups and unicorns will be willing to go.

Mad rush to hire in start-ups

Indian start-ups raised $25 billion in the first nine months of 2021, compared to the $13 billion the ecosystem raised in the full year 2019. Start-ups that raised funding are at various stages of scaling up and are in huge demand for talents, across multiple skills sets. These companies were willing to pay significantly higher salaries than the market to get talents on-board. Moneycontrol reported several instances where companies went overboard in a bid to hire quality talent. Look at this. A Bengaluru-based unicorn hired an engineer for a hefty Rs 75 lakh, only for him to leave the firm for another start-up six months later. This other start-up was willing to pay a 10 percent hike over what this engineer was getting.

Fintech start-up BharatPe lured engineers by offering BMW bikes, a trip to Dubai for the T20 World Cup, and electronic gadgets such as Apple iPad Pro and Bose headphones.

A US-based tech company was willing to pay Rs 1.1 crore for a DevOps engineer, with eight years of experience. He was earning Rs 18 lakh before he went offer shopping, a term used by recruiters when candidates continue to look for better offers.

While the latter example might be an exception, most start-ups are willing to offer 100 percent hikes for talents in areas such as full-stack developer, data engineers, and data scientists. Even then, the possibility of the candidate joining was low. This is reflected in the acceptance rate that has dropped from 70-90 percent last year to 40-60 percent now, according to the Xpheno report.

Krishna Kumar, CEO, Simplilearn, told Moneycontrol earlier that Rs 1 crore salary is a norm for AI/ML engineers with 8-10 years’ experience. According to him, the salary five years back would be Rs 25-30 lakh. “This kind of growth in five years we have not seen earlier,” he added.

This is also applicable for roles like data analytics, architecture and even senior engineering manager, where salary levels are similar, but equally harder to find. Some companies have taken the war for talent a step further by offering crypto coins for referrals. Short-video platform Chingari is willing to pay crypto coins for referrals. The company is doubling its engineering team to 50, and is giving away 200 SOLs (Solana).

All these have made talents in India as expensive as in the US. The talent situation even earned a comment from Ola founder Bhavish Agarwal, who quipped: “Engineering hiring situation in Bengaluru - thinking of offshoring some work to a lower cost centre in SF, Bay Area!”

Simplilearn’s Kumar, too, pointed out that Indian talents, especially in Bengaluru, are more expensive than the ones in the US, apart from the Silicon Valley. 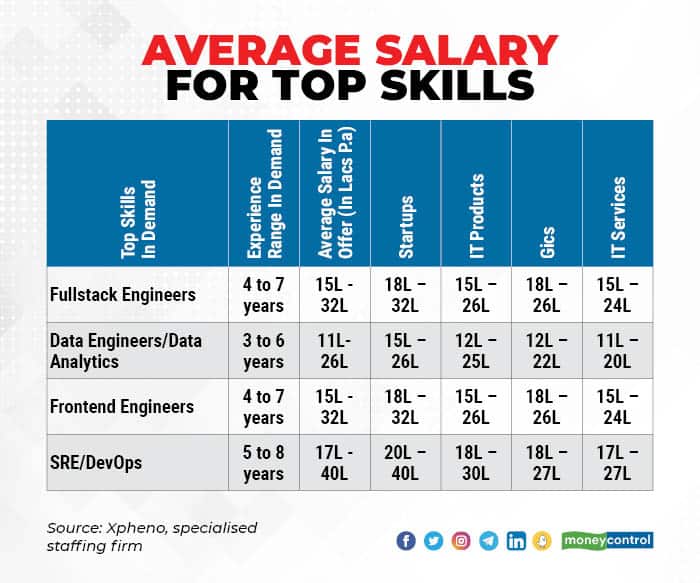 According to recruiters and industry executives, this situation is likely to continue well into 2022 as well, when industry experts see the demand and supply gap bridging.

Even with doubling down on fresher hiring, Chakraborty said that India’s demand for digital talent jobs is approximately eight times larger than its fresh talent pool. “Due to the increasing demand for digital skills, the hiring of techies with a knack for emerging digital technologies will also go up,” she said. 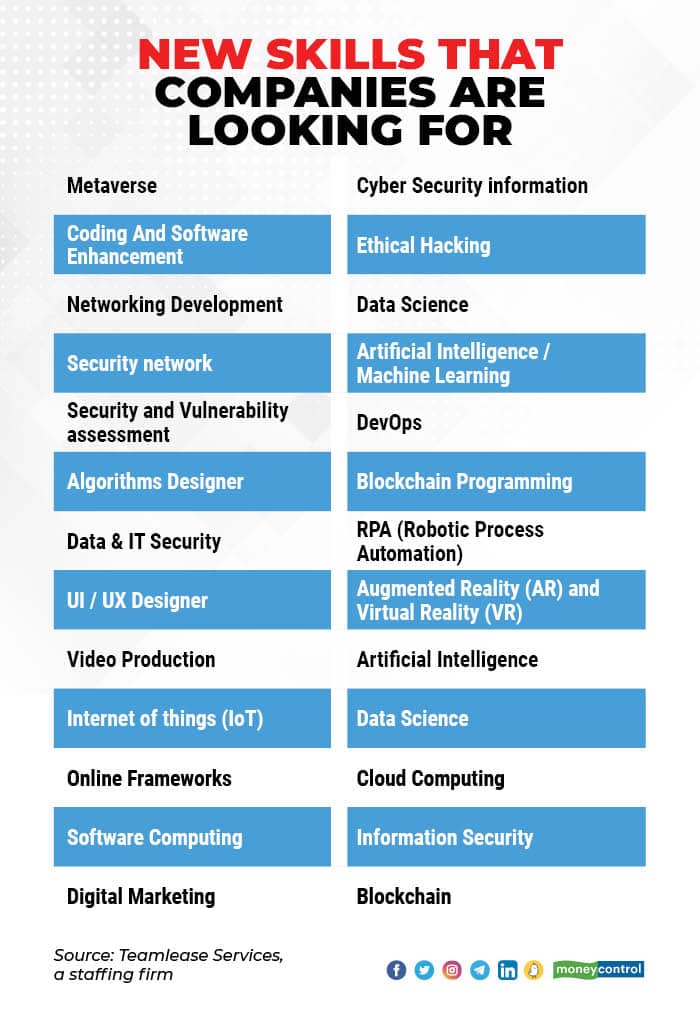 Sinha of LTTS said that demand for technology professionals will continue in 2022, but expect the situation to stabilise in the second half of 2022 as freshers on-boarded will start getting productive.

Tikekar of KPIT Technologies shared similar sentiment, and said that while demand and supply will get better, it would take the whole of 2022 for the talent equation to be stable.

Invite your friends and family to sign up for MC Tech 3, our daily newsletter that breaks down the biggest tech and startup stories of the day
Swathi Moorthy
Tags: #freshers #hiring #Startup hiring #War for talents
first published: Dec 17, 2021 10:52 am