Coming week is expected to be volatile, as inflation fears worsen. Investors should be careful in picking stocks and should invest in a staggered manner, say analysts

On the sectoral front, oil & gas, capital goods, power and IT supported the Sensex and the Nifty to close above 60,000 and 18,000, respectively. 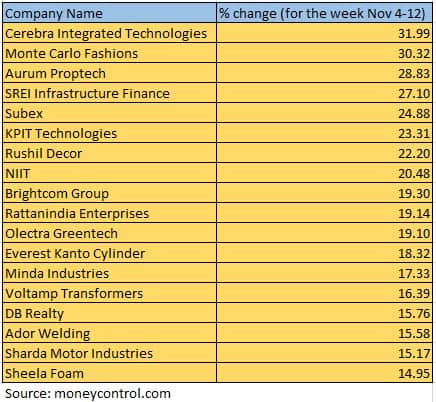 The US inflation hit a 30-year high in October at 6.2 percent YoY, adding fears for an earlier than expected rate hike, he said.

"The domestic market also followed this trend, however, the momentum regained at the end of the week due to sectors in the market which are least impacted by inflation like IT & others, and volume growth, reforms, supportive monetary policy, good quarterly earnings and strong domestic macro data points," he added.

He said the September quarter earnings season continued to keep pace with estimates, while FIIs were net sellers, so far, in November.

With the results season coming to an end, investor focus would shift towards macro developments. Inflation, oil prices, FII flows, and central bank policies would be among the factors directing the markets, Chouhan said.

The coming week would be a shorter one, with the market remaining close on November 19 on account of Guru Nanak Jayanti. Results season is over, with only a few small & midcaps companies left which would declare their results on November 15.

We may see some volatility in markets with three IPOs—SJS Enterprises, Policy Bazar and Sigachi Industries—set to list on November 15.

Global events will also have a bearing on the market, while India will announce October month import export numbers on the first day of the well.

Banking stocks will be in focus with the US declaring T Bonds foreign buying on November 17.

For the coming week, 18,200-18,350 is to be seen as a crucial range and till the time, the Nifty doesn’t surpass it convincingly, the market won’t be out of the woods.

It is too early to comment but we can clearly see a bearish formation of ‘Head and Shoulder’ on the daily chart.

With reference to our recent cautious stance on the market, we will not be surprised to see it happen soon, if the index fails to go beyond 18,200-18,350 in the coming week.

Given that most quarterly results and festival mood are behind us, indices are expected to move sideways.

As markets across the world are trying to decode the implications of rising inflation, any intensive selling by FIIs may take Indian indices lower, unless domestic players provide support.

Next week, Dalal Street will also see a slew of new IPOs listing and the sentiment surrounding listing gains continues to remain bullish.

Amid worsening inflation fears, investors are advised to use knee-jerk reactions to, at best, cherry-pick quality stocks in resilient sectors and invest in a staggered manner.