Jeetu Bhaiya, a character spun off by Netflix in its hit series on Kota, called Kota Factory, was inspired by Nitin Vijay. Vijay founded Motion Education, one of Kota’s most famous coaching centres, and he has a lot of advice and suggestions for IIT and medical aspirants.

“When Netflix wanted to spin off Nitin sir’s character, they decided to keep it as ‘bhaiya,’ because students told them that he’s like an elder brother to them,” said a close confidante of Vijay.

“Usually, here in Kota, you will see every teacher being addressed with a short form of their initials, like ‘NV sir,’ ‘AG sir,’ etc. Nitin sir is also called as NV sir, but Netflix decided to keep it as Jeetu Bhaiya to make the character look like an elder brother,” he said.

Since it was founded in 2007, Motion claims to have churned out 10 top All India rank holders as many as 25 times in NEET and eight times in IIT-JEE.

In an hour-long chat with Moneycontrol, Vijay talks about his journey as an entrepreneur, the impact of COVID-19 on Kota’s ecosystem, and a lot more.

Tell us a bit about your background. How did you end up becoming a teacher-entrepreneur at one of India’s biggest education hubs?

I was born and brought up in Kota, and I belong to a very ordinary family. My father used to work at a thermal power plant and my mother was a housewife. From the very beginning, I had the will to achieve my goals, and the first step I took to fulfil them was getting an admission into IIT- BHU, Varanasi, in 2003.

In the very first year of engineering, I decided my aim was to become a successful teacher. To achieve it, I started teaching physics in Banaras. Daily, I used to travel 60 km, just to teach one batch of students.

In my second year, I realised that students loved my way of teaching. Seeing this, I started an institute, with partners, in Varanasi, for physics and named it Kota Point.

In the next two years of my engineering, I continued teaching there only. Not only did I focus on my teaching but also on my studies and scored around 8 CGPA in my final year and got selected into two most popular companies through campus drive.

But my dream to teach brought me back to Kota, and I started teaching physics in one of the renowned institutes of that time. I hardly worked there for six months. Then I started my own institute for physics, and named it Motion Education. It flourished year after year and bloomed into flowers of success.

Tell us a bit about your experience of founding Motion Education, especially in a city like Kota, where competition among education companies has always been intense. Were you nervous? Did you fear taking on the big established coaching centres?

The foundation of Motion Education was laid with the establishment of Motion IIT-JEE in December 2007. I always wanted to start something on my own, and when I decided to leave Bansal Classes to start Motion, I was overwhelmed to see my students (at Bansal Classes) helping me out to set up the institute.

All seats at Motion were full within two days of setting up the institute. We then searched for a larger property and named our institute Motion IIT-JEE. It has grown successfully over the years, and later we officially set it up as Motion Education Pvt Ltd.

How has the influx of students been, post the pandemic, and what differences did you see in students when they came back offline this year, after two years of online classes?

The last two years of the pandemic were a blessing in disguise for Kota. Everyone realised the drawbacks of online education. I don’t want to get into the debate of offline and online, but I feel that in competitive examinations like JEE and NEET, where teenage students have to study for 12-15 hours a day, online becomes less competent.

When everything was online last year, even students who weren’t IIT or medical aspirants joined the online classes as it was way cheaper. I know many parents who told their kids to just take it up and give it a try. When students saw the lectures, the syllabus, they realised it is perhaps best to go to a tuition centre, and what better than Kota, where you have all these facilities.

If I talk about the change in students, one thing I can tell you is, perhaps, that when it comes to knowledge, they are lacking a bit. The last two years were a complete mess for many. For instance, in 2019, if I was teaching an 11th standard batch, I would not touch the basics, essentially whatever you’re taught in school.

But this year, we all go deep into the basics as we know that the students might not be able to pick it up directly. That’s a major difference we are seeing in students. Having said that, IQ levels are not a problem at all. Kids have become smarter.

In a situation like this, an elder brother becomes a very good counsellor. So I think the key is that you need to be a very good elder brother to all students. You might have heard that I teach in a very entertaining manner. While that is true, I am also infamous for scolding. But students don’t get bogged down because of my scolding, they rather feel motivated. I genuinely feel that it can only come from a ‘brother-like’ figure.

If a student treats me as a professor, he or she might not be able to ask me doubts. If they treat me as an elder brother, they can ask anything openly. That’s something I think teachers should do. They should be good elder brothers to students. What’s important is you should be able to naturally do it.

If you are faking it, students won’t be comfortable with you. So, I think the key is to be organic.

Kota has seen the highest number of IIT and NEET aspirants this year. So, one would expect competition to be more intense, too. All students are different in their own ways. While some students feel motivated because of the pressure cooker-like atmosphere, some feel the heat of it. How do you advise students, especially the ones, who feel the pressure?

Every year, I tell one thing to all the kids during our orientation. If 100 kids come to Kota, 95 will be successful in their lives. Will 95 get selected (for IITs)? I don’t know, but 95 will become successful, for sure. Let me tell you why. If you come to Kota, you get into the groove of studying for long hours, studying for 12-15 hours a day.

Every year, we tell the same thing to kids. You focus for these two years like this, and you will be successful in your lives. This is the ladder to success. Rank will be just an outcome, but you will be successful for sure, whether you get a good rank or not. So, I don’t make kids feel ‘selection pressure.’ I just tell them to perform their best. We have never threatened any kid with ranks.

Of late, Kota has seen more competition among education companies rather than among students. New-age edtech companies like Unacademy and PhysicsWallah have also opened offline centres here. How do you look at this rising competition?

See, to be very honest, there’s a huge difference between teaching online and teaching offline. You just cannot switch to offline randomly. For a teacher, to teach sitting in their rooms versus teaching here in a class of 200 students, it’s not easy to adapt. Students will directly ask doubts on your face here. In online, that is not the case.

Secondly, in offline, you have to map a kid’s attendance, you have to conduct tests, etc. Basically, you have to do a lot of things other than just teaching. In online, I think teaching is 80 percent of a teacher’s job. In offline, it’s only about 25 percent. You have to help the kid set their time table, arrange classes, conduct regular parent-teacher meetings, be physically present there on doubt counters, take regular feedback from the student etc. So there’s this entire ecosystem that has evolved over the last few decades offline that isn’t there online.

I am not going to take names here but all new education companies that have come to town need to understand this entire offline ecosystem. They might have more money in the bank, but if they don’t understand this ecosystem, they will not be able to do well.

I feel their focus is also less. They are opening hundreds of centres across the country at a go. One cannot do well unless their focus is on a particular thing. I really hope they do well as I want competition to be there. This competition is healthy among companies, but I only feel that they will take some time to evolve here.

The main point is, you cannot win a market like Kota just by throwing money as education cannot be compared directly with valuations. You need to spend time to understand. Only then you would be able to excel. 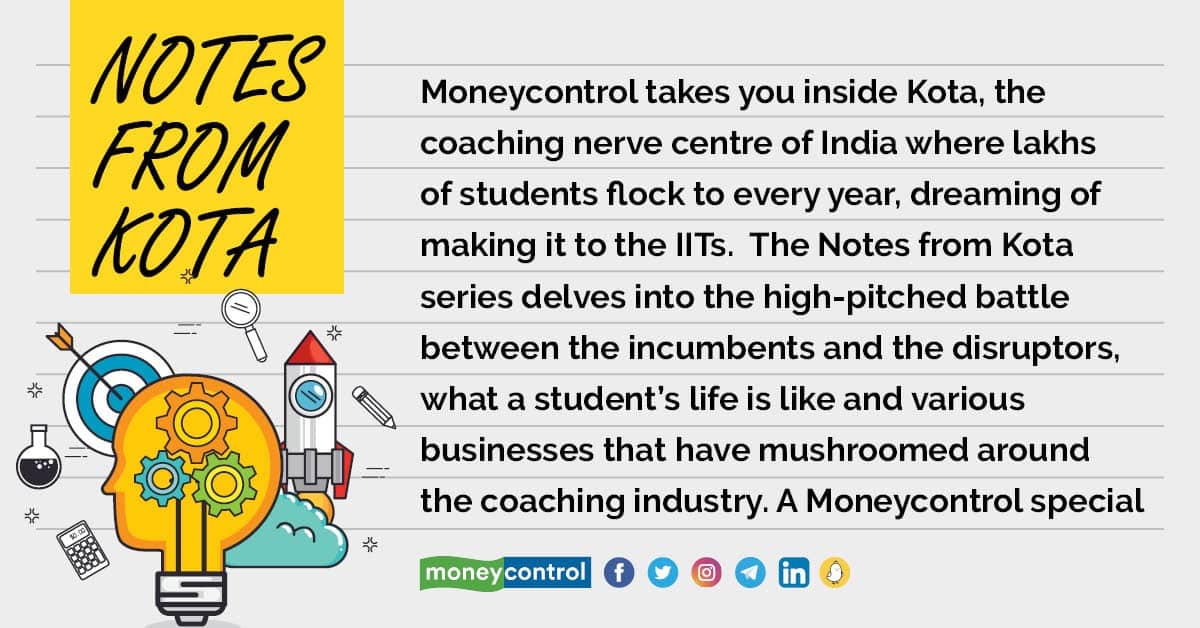